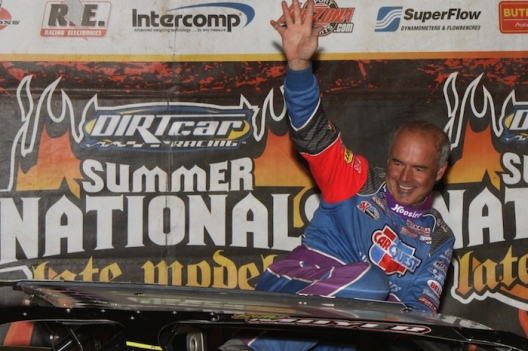 HAUBSTADT, Ind. (July 6) — If a track hosts a UMP DIRTcar Summernationals race long enough, Billy Moyer is bound to add it to his list of winning series tracks.

The Hall of Famer from Batesville, Ark., led all 40 laps Sunday at Tri-State Speedway, winning his first series race at the tight quarter-mile oval in the tour's 19th visit to southwestern Indiana. He kept any challengers at bay after a late-race caution to pocket the $5,000 winner’s purse and his 85th career Summernationals victory, tied for all-time best with Shannon Babb.

“That last lap, I messed up a couple of times pretty darn bad on that last lap — I was kicking myself,” Moyer said. “But we was able to hang onto it.”

NASCAR Sprint Cup driver Austin Dillon came from seventh to finish second, but never made a serious challenge on Moyer while taking second from Randy Korte of Highland, Ill., in the final laps. Ninth-starting Bobby Pierce of Oakwood, Ill., was fourth and series points leader Ryan Unzicker of El Paso, Ill., rounded out the top five.

Tanner English of Benton, Ky., ran third most of the way, but after losing the spot to Dillon on the 36th lap, he spun in turn one, then headed pitside.

In his first trip to Tri-State in several seasons — and first in the Longhorn Chassis he switched to during the off-season — Moyer said he felt comfortable at a track he’s run plenty of laps around over the last 25 years.

“We just guessed everything right here tonight. Right off the trailer, it wasn’t too bad when we hot-lapped, and we just kept tweaking on it through the night, then in the heat race it felt pretty good, and we did just a few other things for the main event,” Moyer said. “The track just always keep you guessing, and we just made the right decision.”

While English and Korte took shots at him the first few laps, he stayed comfortably ahead most of the way, then stretched his lead with 10 laps remaining with clear racetrack ahead. He was able to hold on despite a caution with four laps remaining.

“You just gotta try to keep your patience, keep your cool,” Moyer said. “This track is slick-slick, and you can overrun the corners real easy here, and I think that’s what gets a lot of people into trouble. And then you can underdrive it, too.

“So it keeps you on your toes, for sure. You’ve just gotta try to do everything right and not get into the corner too hard, and try to keep the thing underneath you. We kind of gambled and went soft on tires tonight — I think a lot of them did — but then again, you gotta take care of (the car) even more.”

Dillon, who began the day with a career-best fifth-place in NASCAR Sprint Cup action at Daytona International Speedway, made his first Dirt Late Model start with Team Dillon Racing in nearly a full year, but he didn’t appear rusty. He also knew that Moyer likely had the best car.

“Billy, he’s Mr. Smooth. I had the bottom going pretty good,” said Dillon, who went from fourth to second in the race’s late stages. “I’d like to have had another restart because I could gain some ground on the very bottom down there. It would’ve been tough to beat him, but I would’ve liked to have had a few more laps.”

Korte ran second most of the way and found a bright spot despite his third-place finish.

“We didn’t need that (last) caution to come out,” said Korte, who posted his best series finish of 2014. “But I think we finally found something, found what our problem has been the last three or four nights, so now we’ll get things on track to be a lot better.”

Three cautions slowed the action. The first flew on the eighth lap for Brandon Sheppard, who got the worst of a series of chain-reaction bumper tags and ended up stopped inside turn three while running 10th. The second appeared on lap 18 when 15th-starting Jason Riggs, who was up to fifth, spun after trying to slip under Dillon in turn one. The third yellow was for English’s spin.

The series takes a day off Monday before returning to action and Kentucky on Tuesday for a $5,000-to-win event at Florence Speedway in Union.

Polesitter Brian Shirley immediately jumped to the high side and raced to victory while Mike Schulte and Tyler Reddick battled for the second spot early in the race. Schulte asserted himself in the high groove and, after edging ahead down low early, Reddick joined him up top. Shirley and Schulte got the transfer spots while Reddick was third ahead of Frankie Martin, who took fourth late from Jim Moon, who lost ground when he scraped the turn-four concrete on the seventh lap.

In a draw of heat race winners, Billy Moyer drew the pole with Curtis Roberts alongside. Tanner English and Jason Feger start in the second row. ... Roberts and English will be looking for their first series victories. ... Brian Shirley is the only series regular in the B-main; he starts on the pole. ... Ted Brown's Quality Paint & Body Shop of Newburgh, Ind., a sponsor at Tri-State, offered $500 for a Late Model dash for cash, but officials decided against it because it would've disrupted the flow of the program with drivers unaware until after the heat races.

Polesitter Jason Feger won the race into turn one and pulled away as fellow front-row starter Shannon Babb tried a crossover move in turn one. Feger had a half-straightaway lead after three laps and was never challenged while Brandon Sheppard was just behind him in third on the high side. Kevin Cole started and finished fourth in Steve Lampley's No. 33 for the final transfer spot, while Jim Moon was fifth.

Boldly sliding in front of outside front-row starter Austin Dillon in turn two on the first lap, polesitter Tanner English took command and raced to victory. Dillon tried to make the middle grove work but settled for second. Jason Riggs was initially scored third, but officials ruled that Kent Robinson's inside run exiting turn four on the final lap nipped Riggs, giving Robinson the spot. Riggs also transferred. Third-starting Tyler Reddick, who got crossed up in turn two on the second lap, never contended and was a distant fifth.

Polesitter Billy Moyer moved under Ryan Unzicker midway through the heat, pulling away from an easy victory. Unzicker led in the high groove early, but when Moyer dipped low, Unzicker edged down a bit. He lost momentum and Moyer completed the pass exiting turn four, pulling away to win by 2.5 seconds. Unzicker, the series points leader, was second, transferring to the main along with Dillan White and Michael Kloos. The first start was called back and another first-lap caution appeared when Matt Santel climbed the turn-four wall, causing right-front damage which forced him out.

With the high side the fast way around, outside front-row starter Curtis Roberts took command at the outset and was never headed in th 10-lapper. Polesitter Randy Korte was nearly a half-straightaway behind before joining Roberts up top and he never challenged for the top spot. Korte transferred to the main event along with second-row starters Bobby Pierce and Steve Thorsten. Sixth-starting Brian Shirley was fifth while Bob Gardner a distant sixth. Rodney Melvin dropped to the infield after six laps.

Randy Korte of Highland, Ill., the 2007 Summernationals winner at Tri-State, tripped the clock quickest among 32 qualifiers. Korte posted a lap of 14.476 seconds on the quarter-mile oval.

He’ll start on the pole of the first heat. Other heat race polesitters: Billy Moyer of Batesville, Ark., Tanner English of Benton, Ky., and Jason Feger of Bloomington, Ill. The top four finishers from each heat transfer to the main event.

The tight, quarter-mile Tri-State Speedway hosts the the Summernational for the 19th time with winless Ryan Unzicker of El Paso, Ill., bringing in an eight-point lead over three-time champion Shannon Babb of Moweaqua, Ill. Besides a half-dozen series regulars, NASCAR Sprint Cup driver Austin Dillon expected to be among the entries.

Tri-State has hosted some dramatic series races, including last-lap passes for victories by Donnie Moran (over Kevin Weaver in 1997) and Ed Dixon (over Kevin Claycomb in 2000), along with Scott Weber’s 2012 victory, one of the biggest series upsets in the past 10 years.

With 32 cars are entered, time trials will be split into two groups folllowed by four heat races and one or two consolation races, depending on scratches. Provisional starters round out the 22-car field.

Tri-State is the site of winningest Summernationals driver Shannon Babb’s first-ever series victory in the 1999 season opener as a 25-year-old piloting a Louisiana-based GVS Racing Rayburn Race Car. Babb outran Rick Aukland while Ron Sensel was third for his best-ever series finish. … Austin Dillon is flying to Indiana from Daytona where he had a career-best Sprint Cup finish of fifth in the Coke Zero 400. ... Forty-five modifieds are part of the two-division program.