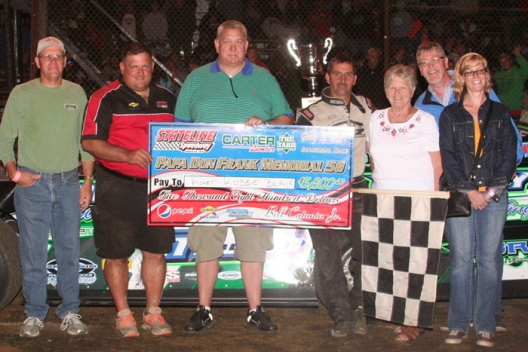 Steadily heading to the front from his 10th starting spot, Blair overtook Chub Frank of Bear Lake, Pa., with eight laps remaining to capture the 50-lap Papa Don Frank Memorial. He earned $5,800 from the race purse and $500 bonus from Niemeyer’s Garage in front of a huge holiday weekend crowd.

Frank settled for second at the track co-founded by his father Jerry while Mike Knight of Ripley, N.Y., was third. Greg Oakes of Franklinville, N.Y., and Dick Barton of Ashville, N.Y., the track’s winningest active driver with 78 victories, rounded out the top five.

Barton jumped out to the early lead with Darrell Bossard and Frank giving chase. After a lap-three caution for a minor incident, Barton led the field back to green followed by Bossard, Frank and Dave Hess Jr.

Frank grabbed the second spot, but Barton built a five-length lead by the seventh lap and was into lapped traffic just a few circuits later.

After Chuck Parker spun to draw a yellow, Barton again began expanding his lead and was into lapped traffic on lap 19 when David Scott and Steve Kania tangled in turn four for another caution, a yellow followed by another when John Lacki spun in turn two.

Fifth-running Dan Stone of Thompson, Pa., pulled to the pits during the caution, and Blair was up to third by lap 23 when Doug Eck slowed for a lap-23 yellow.

On the restart, Frank won a side-by-side duel with Barton to take command with Blair, Knight and Bossard holding the rest of the top five positions.

Blair took second from Barton on the 32nd lap and began tracking down Frank. He reached him by the 40th lap, then pulled alongside for the winning pass on lap 43.

Traffic in front of the leaders didn’t slow Blair, who built his margin to a half-straightaway in closing out the victory.