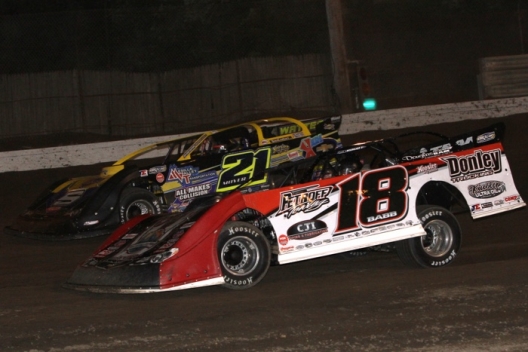 MAPLE PARK, Ill. (June 15) — The titans of the DIRTcar Summer Nationals clashed for the second time in 24 hours Friday night at Sycamore Speedway — and once again, Shannon Babb of Moweaqua, Ill., came out on top.

This time, though, Babb triumphed in a down-to-the-wire thriller, outdueling longtime rival Billy Moyer of Batesville, Ark., in a tense race-ending sequence to score a $10,000 victory in the evening’s 55-lap feature.

“Once again, it was a heck of a good race,” said Babb, who beat Moyer to the checkered flag the previous night for a $5,000 Summer Nationals win at Kankakee (Ill.) County Speedway. “I didn’t know how it was gonna turn out honestly. Now you can look back at it and you can say whatever you want, but when it’s all going on and unfolding right in front of your eyes you never know what’s gonna happen. We were just really happy to be able to get by him.”

Babb, 44, led the A-main’s opening lap before ceding the spot to the 60-year-old Moyer and didn’t move back in front until nosing ahead of Moyer on lap 50. That began a wild conclusion to the richest Super Late Model race in Sycamore’s history, a flurry of action that saw the Hell Tour’s all-time winningest drivers swap the lead five times in the final six circuits.

After Moyer led lap 51, Babb paced lap 52 and Moyer eked ahead on lap 53, Babb seized the top spot for good in his XR1 Rocket as the white flag was displayed. The four-time Summer Nationals champion negotiated lapped traffic better over the last circuit to open some breathing room and beat Moyer’s Victory Race Car to the finish line by 0.469 of a second.

Ryan Unzicker of El Paso, Ill., finished third in his Pierce Race Car, just over two-tenths of a second behind Moyer after being hot on the leaders’ rear bumpers over the last 10 circuits. Devin Gilpin of Columbus, Ind., marched forward from the 15th starting spot to place fourth in Jim Beeman’s MasterSbilt machine and Brian Shirley of Chatham, Ill., completed the top five in Bob Cullen’s XR1 Rocket after surviving two near-spins between turns three and four early in the distance.

The latest showdown between Babb (now 94 career Summer Nationals wins) and Moyer (series-leading 96 career victories) heated up with less than 10 laps remaining when Babb found enough room underneath Moyer off turn four to nearly steal the top spot as lap 47 was scored. Two circuits later Babb actually surged ahead of Moyer exiting turn four but Moyer gunned his machine hard off the outside and maintained command.

Babb finally was scored the leader on lap 50, but the battle was far from over. They proceeded to trade the point on each of the next four laps, bringing the massive crowd filling Sycamore’s bleachers to its feet.

“It goes back to this: when you’re leading that thing, you don’t know where to go honestly,” said Babb, who started from the pole position. “(Moyer) was making really good lines, and (the groove) just kept getting lower and lower down there in (turns) three and four and I was able to get more and more bite.

“He slipped up one time and I was able to get under him and I got a good hold down the straightaway. He was able to inch back by me again, so I didn’t know where it was gonna end up. I just knew we had a heck of a good race going on.”

As the pair’s race for the win raged, Babb realized how special the moment was.

“I kept looking over at him on the backstraightaway and I’m thinking, What’s he gonna do when we get down here to three?” Babb related. “But he raced me real good. Once again, Billy is a heck of a good racer.”

A Moyer understudy earlier in his career, Babb relished defeating the Hall of Famer he knows so well for the second consecutive night.

“Oh, yeah, we’ve run like at lots of places, a lot of races,” said Babb, who recorded his first-ever triumph at Sycamore and his fifth overall win of 2018. “He’s usually the man to beat. He’s beat me a lot of times, so we’re real happy to not rub on each other, race clean and get the win.

“That was fun,” he added. “It was really good racing out there.”

After exchanging the lead twice with Babb during the first 21 laps of Kankakee’s 40-lapper before losing ground and then falling short in much more excruciating fashion at Sycamore — where Moyer was victorious last year in the track’s inaugural Summer Nationals event — the veteran mourned the strategic choices he made.

“I never should’ve moved off the bottom I guess,” said Moyer, who started third. “I felt like my left-rear tire … everybody’s on the same stuff, but it felt like it was going away. It just didn’t feel like it was near as good there at the end as it was mid-part of the race.

“And the way the track was, that’s the bad part of leading the thing. Really, there was nobody making no time up top when I would get to lapped cars and watch a straightaway ahead what was going on, so I seen that wasn’t the thing to do. But in the middle there’s all them crumbs, and if you do it just right you go through their decent I felt like.

“But I should’ve know better because nobody passed me or nobody ever got beside me on the outside. So if I’d do it again I guess I’d just stayed glued to the bottom better.”

Moyer, whose last-ditch bid to challenge Babb on the final lap was snuffed out when he nearly ran into the back of the lapped car driven by Brandon Thirlby of Traverse City, Mich., in turn three, wondered if he needed to be more aggressive to stave off Babb.

“Last night I was too nice to him. Maybe tonight I was too,” Moyer said with a laugh when asked why he hadn’t cut down in front of Babb to take his line. “He’s a good guy. He earned it. He deserved it.”

Unzicker, meanwhile, overtook Shirley for third on lap 28 and was right behind the Babb-Moyer tussle late in the distance before finishing third to rebound from two quiet runs to start the Summer Nationals.

“The two best guys in Summer Nationals country right there were going at it, so I did have a good seat,” Unzicker said. “There towards the end with about 10 to go the car started gripping a little bit more and turning real good, so I thought maybe them battling would give me an opportunity to sneak underneath Babb. But just not enough room, not enough racetrack.”

Four caution flags slowed the race, all coming in the first 25 laps. The first came on lap five when Frank Heckenast Jr. of Frankfort, Ill., ended up spinning between turns three and four after Shirley slid completely sideways. Shortly thereafter, on lap 13, Heckenast was the victim of circumstance again when he spun in turns three and four behind the twirling Roger Markham of Virgil, Ill., which prompted Heckenast to call it a night. Subsequent cautions flew on lap 22 when Mike Spatola of Manhattan, Ill., blew a left-rear tire on the backstretch and lap 25 when Timothy Culp of Prattsville, Ark., exploded a right-rear tire off turn four and collected Billy Moyer Jr. of Batesville, Ark.

Ryan Unzicker overtook Gordy Gundaker for the lead following a lap-six restart and went on to beat Gundaker to the finish line by 1.619 seconds. Mike Spatola and multi-time Sycamore track champion Charlie Olson completed the transfers.

Shannon Babb led from wire-to-wire, racing unchallenged en route to a 1.732-second victory over Timothy Culp. Tony Peterson was hot on Culp’s heels in third at the finish while Jason Feger was farther back in fourth.

Billy Moyer led all the way, beating his son, Billy Jr., to the finish line by a healthy margin of  2.006 seconds. Tony Jackson Jr. and Devin Gilpin completed the transfers in the non-stop race. Polesitter Billy Drake never made a lap because ignition problems prevented his car from firing after he was pushed onto the track.

Brian Shirley dominated the first prelim, scoring a flag-to-flag win by 0.749 of a second over Frank Heckenast after a final-lap caution for John Provenzano wiped out his edge of over 3 seconds. Heckenast grabbed second on the final restart, overtaking Chris Simpson, who also was passed by Nick Hoffman and thus settled for a fourth-place finish after running second for the first nine laps.

Summer Nationals points leader Brian Shirley of Chatham, Ill., was quickest in time times, turning a lap of 14.533 seconds during the first group to set the pace. Shannon Babb of Moweaqua, Ill., topped the second group at 14.715 seconds.

There was a slight delay during the first qualifying group when Scott Schmitt of Tonica, Ill., had his car's water pump break and go through the fan and radiator, dropping fluid on the racetrack and necessitating a cleanup before action resumed. He did not log an official lap and scratched from further competition.

Some showers fell around the Sycamore Speedway early Friday morning, but the weather has turned absolutely perfect for the track’s second Summer Nationals event: clear skies and high temperatures reaching into the low 80s. … Billy Drake of Bloomington, Ill., who won the Hell Tour’s opener on Wednesday night at Peoria (Ill.) Speedway, is back in action with his Ray Neltner-owned car after skipping Thursday’s program at Kankakee (Ill.) County Speedway. He finished fourth in last year’s inaugural Summer Nationals show at Sycamore. … Chris Simpson of Oxford, Iowa, is making his first Summer Nationals start of 2018. He plans to enter Saturday’s $10,000-to-win race at the Dirt Oval at Route 66 in Joliet, Ill., as well. … Other notable racers making first series appearances this year include Spencer Diercks of Davenport, Iowa, and Scott Schmitt of Tonica, Ill. … Some of the top Sycamore locals in attendance include Charlie Olson of Kingston, Ill., and Jay Brendle of Kirkland, Ill. … As Brian Diveley of Springfield, Ill., tweaked on his car in the pit area in preparation for his first-ever start at Sycamore, he said he’s still working off the rust from a year-and-a-half away from the driver’s seat. He’s made just four starts since returning to competition with a Rhyne-powered Black Diamond car, including all of this week’s Summer Nationals events.

The 2018 DIRTcar Summer Nationals makes its third of 28 scheduled stops with a visit to Sycamore Speedway, a track located in farm country about an hour’s drive west of Chicago. A $10,000 first-place prize ranks this event as the richest Super Late Model show in the facility’s 55-year history, topping the $7,500 payout that Billy Moyer of Batesville, Ark., claimed for winning Sycamore’s first-ever Summer Nationals event last year.

Built by brothers Joe and Nick Fabrizius, Sycamore is now being operated by a third-generation of Fabrizius family members.

The program will be topped by a 55-lap Super Late Model feature.