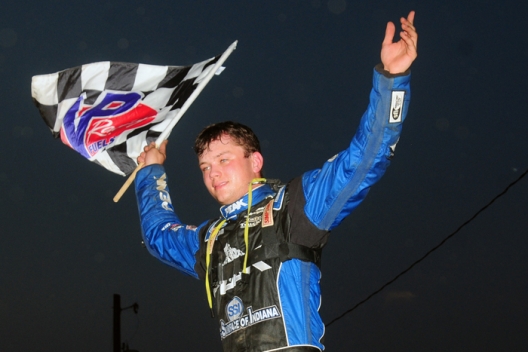 Mark Schaefer/schaefer11.smugmug.com
Hudson O'Neal celebrates his Ultimate Battle of the Bluegrass win at Brownstown.
What won the race: Polesitter Hudson O’Neal grabbed the lead ahead of fellow front-row starter Jason Jameson on the opening lap and led all 31 laps to win Saturday’s Johnny Wheeler Tribute at Brownstown. O’Neal’s first Ultimate Battle of the Bluegrass victory paid $3,000. Jameson chased O’Neal the entire distance but settled for second in front of Devin Gilpin.
Quotable: “I felt pretty good when I was trying to get by some of them lapped cars around the bottom. I was just kinda worried they never really give me the (signal) that I was very far away from (Jason Jameson),” said O’Neal. “It must have been a pretty exciting race. I was just hoping it would stay as uneventful as possible.”
Key notes: O’Neal won by three car lengths in a race that was wrapped up before sunset. … O'Neal is the tour’s second winner. … Brandon Overton of Evans, Ga., won at Daugherty Speedway in Boswell, Ind., on May 27. … The 31-lap event was named in honor of the late Johnny Wheeler, 54, of Campbellsville, Ky., who died unexpectedly Monday night after suffering a heart attack. The popular drivers driver known as The Wheelman sported the No. 31 for much of his career, which included multiple track championships in Kentucky.
Winner's sponsors: O’Neal’s Club 29 Race Car is powered by a Clements Racing Engine and sponsored by Peak Antifreeze and Motor Oil, Vermeer Midwest, Tarpy Trucking, West Side Tractor Sales and Sub-Surface of Indiana.
Points chase: Brandon Overton (35) of Evans, Ga., leads Kent Robinson (34), Tanner English (33), Chad Stapleton (32) and Jason Feger (31).
Car count: 15
Polesitter: Hudson O'Neal
Heat race winners: Hudson O'Neal, Jason Jameson
Next series race: June 16, Virginia Motor Speedway (Jamaica, VA) $20,000
Editor's note: Results and race details are unofficial.