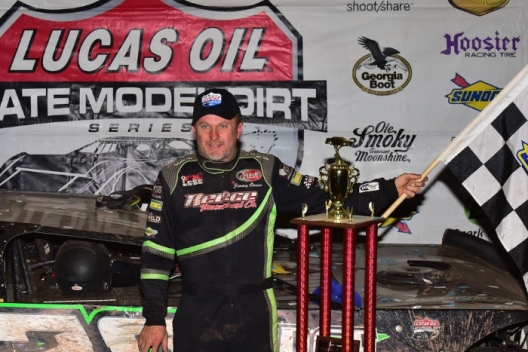 Starting 17th in the first Lucas Oil Late Model Dirt Series visit to the eastern Kentucky oval, Owens came out on top of a three-wide battle for the lead in the final laps for a $10,000 victory, the 49th of his career on the national circuit.

It took Owens a while to get rolling at the 3/8-mile oval, but once he did he roared to the front to top series points leader Don O’Neal of Martinsville, Ind., and Eddie Carrier Jr. of Salt Rock, W.Va., who started outside the front row and led 45 of 50 laps.

"I messed up qualifying," said Owens, who closed to within 10 points of O'Neal in the race for the 2014 title. "We came out in the B-main and felt a whole lot better. Starting where we did, we gambled on tires. The track came to us. We started picking off cars every lap and I thought I was going to have to settle for third behind Eddie and O'Neal. Then after that last caution, we went into turn one and were three wide and I was fortunate to come out ahead.”

John Blankenship of Williamson, W.Va., was fourth while Jackie Boggs of Grayson Ky., rounded out the top five. Polesitter and fast qualifier Tim Dohm of Cross Lanes, W.Va., contended much of the way but settled for sixth at the conclusion of the Hatfield & McCoy Feuding 50.

While Carrier led virtually all race long, he had his hands full with O’Neal in the late stages while Owens crept into the top five past the halfway point. With Carrier and O’Neal in a tight battle up front, Owens slipped by Boggs to grab third just before the last of four cautions appeared on lap 44 for Kenneth Howell’s slowing car.

With the field rebunched for the restart, a wild battle ensued among Carrier, O’Neal and Owens.

On the restart, O’Neal dove under Carrier in turn one to grab the lead into turn one, while Carrier answered by sliding back ahead exiting turn four. Owens was right in the mix, by how, and the frontrunners entered turn one three abreast on lap 46 — Owens underneath O’Neal who was underneath Carrier.

O’Neal squeezed out of the middle to edge ahead, but Owens slid under O’Neal exiting turn four for a lead he’d never give up.

"I didn't want to see that last caution flag for sure," said O'Neal. "I was diamonding off the corners and catching (Carrier). When that caution came out, it hurt the momentum we had built up.”

Carrier appeared to have the car to beat, but ended up settling for third.

“I feel bad for all my family and friends that were here tonight,” the native Kentuckian said. “I badly wanted to win tonight, but we came up short. We now know we had a car capable of running up front.”