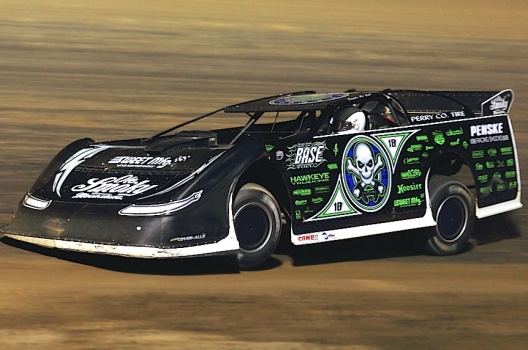 PORTSMOUTH, Ohio (July 4) — After a night struggling at another Ohio track, Scott Bloomquist of Mooresburg, Tenn., got dialed in at Portsmouth Raceway Park on Friday for a $10,000 payday in the Independence 50, his third Lucas Oil Late Model Dirt Series victory of the season.

Bloomquist led all the way at the 3/8-mile oval, keeping the second-running cars of Steve Francis, Duane Chamberlain, Jackie Boggs and then three-time and reigning series champion Jimmy Owens of Newport, Tenn., who finished two lengths back at the finish.

Bloomquist was never seriously challenged in finishing ahead of Owens, Boggs, Chamberlain and Francis, but the winner wasn’t sure all would be well.

"I was worried we had gone too soft on tires for the feature,” Bloomquist said. “There were other cars that went harder on tires for 50 laps. I think if it had been longer than 50 laps we would have still been OK.

“After the night we had last night, my crew worked their tails off the last night and this morning getting this car ready. Our car fired off really well after those early restarts. Traffic wasn't too much of a problem. I didn't know how close those other guys were.

"I have to thank Andy Durham Racing Engines, Penske Shocks, Base Fuels, and Hawkeye Trucking. Last night was one of those nights where I thought I might as well go home. But we aren't quitters, and we changed engines in the car, and the car was just fantastic all night tonight.

“I was kind of locked in on the tire combination before they watered the track. Then I thought maybe we were in a little bit of trouble, but it all worked out for us. We have been snakebitten here lately. It feels good to win one again.”

Owens started sixth and was in the mix of top-five runners virtually all the wall, climbing to third by lap 31 and then overtaking Boggs for second with eighth laps remaining after a spirited battle.

Owens tried to chase down Bloomquist in the closing circuits, but he had to contend with slower cars  running his line. Owens got by a lapped car and closed rapidly on Bloomquist over the final two laps, but his charge came up short.

"We had to work for that finish,” said Owens, who cut into the points lead of Don O’Neal of Martinsville, Ind., who ended up ninth. “There was a heck of battle between about four or five of us there for a while. When I caught Jackie, he and I went back and forth for a long time.

When I got by (Boggs), I didn't think I had enough laps to catch Scott. He was well out in front. But to come from sixth like we did was a good point's night and we will head to 201 (Speedway in Sitka, Ky.) tomorrow. We have never raced there, and we are looking forward to it.”

Boggs slipped by Chamberlain to hold the second spot through the middle stages but ended up third behind a pair of Lucas Oil champions.

"To run third with these guys, that's a good thing,” Boggs said. “Our car was pushing a little bit more than I would have liked near the end. We had a good car, but just not good enough. To beat these guys everything has to go right for you. If you are off by a little bit it makes a big difference.”

Notes: Bloomquist’s 49th career series victory broke a tie with Jimmy Owens for the most all-time wins in series history, a back-and-forth battle likely to continue throughout the season. … Three early cautions slowed the action for R.J. Conley's lap-seven spin; Ben Adkins slowed on the ensuing restart. ... A lap-nine caution appeared for Shannon Thornsberry's flat tire. ... Seventeen drivers completed 50 laps. ... Steve Francis set fast time and earned the pole for the second time in three nights. ... Greggie Oliver, a $5,000 winner Thursday at Atomic Speedway, tagged the wall in time trials; he was 14th in the feature.