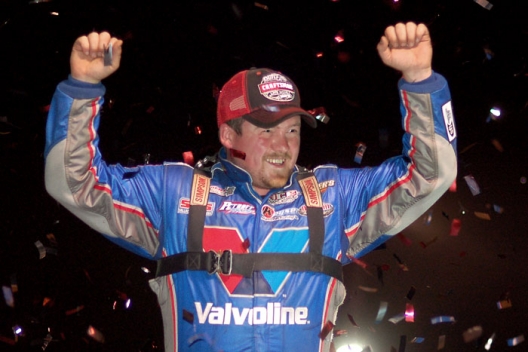 MERIDIAN, Miss. (April 20) — Brandon Sheppard needed to charge forward. The Whynot Motorsports Park racing surface wasn’t quite conducive to the high-side, cushion-pounding runs that the New Berlin, Ill., driver is known for around his native Midwest however. So instead, the 12th-starting Sheppard had to patiently inch his way to the front from the middle of the 26-car World of Outlaws Craftsman Late Model field.

After working his way to second by lap 17, Sheppard stalked race-long leader Chris Madden of Gray Court, S.C., for more than 25 laps before finally getting the opening he needed. As the pair raced down the backstretch on lap 38, Madden left the door cracked. On the next circuit, he left it wide open. Sheppard took advantage and zipped to Madden’s inside.

Though Madden fought back and managed to lead lap 41, Sheppard wouldn’t be denied. He finally cleared Madden on the same circuit and quickly began to pull away, leading the final 10 laps en route to a $10,000 victory Friday, his second straight World of Outlaws triumph at Whynot and 26th of his career.

After leading the first 40 laps from the pole, Madden gave way to Billy Moyer a few circuits later. The Hall of Famer from Batesville, Ark., closed on Sheppard but couldn’t make a pass, finishing .467 of second back in the runner-up spot while Madden had to settle for third. Chub Frank of Bear Lake, Pa., finished fourth after starting 11th, while eighth-starting Mike Marlar of Winfield, Tenn., completed the top five.

“That was definitely not an easy one,” Sheppard said. “Chris (Madden) and Big Billy (Billy Moyer) there did a heck of a job. The track was really tricky tonight. It was changing lines all over the place. I could roll the middle there pretty good for a little bit and then I’d have to go to the bottom. Then I’d have to move up. Then the middle kinda got dirty there. It was just a crazy race, you know.”

Sheppard’s 2017 Whynot victory came after starting from the pole. Though that win wasn’t easy — the race went caution-free and had multiple lead changes — this victory was no cakewalk either. A lackluster qualifying effort left him fighting for a transfer spot in his heat, which in turn left the 25-year-old Sheppard buried in the middle of the pack to start the main event.

“I think we had a good car early. We just ran the wrong line I think qualifying,” Sheppard said.

Sheppard suggested that trailing the leaders early could have worked in his favor, especially on an ever-changing track that left drivers scrambling to find any bit of traction they could.

“I’m sure it was pretty hard to lead that race, especially there in the first half,” Sheppard said. “Like I said, the line was moving around all over the place. I could see where he was messing up a little bit. I kinda found a line coming off of (turn) two where I could get underneath him if he pushed up again and that’s what happened. Everything just worked out for us and we’re just really fortunate to have been in the position to get the lead there.”

While Sheppard worked his way to the front, Madden set sail from the front row. He bolted ahead of hometown driver Chad Thrash on the opening lap and built comfortable margins over Moyer during the first half. But as the race wore on, he began to lose the handle on his car, giving ground to Sheppard, who passed Moyer for second just before Gavin Landers of Batesville, Ark., spun on lap 18 to bring out the third caution.

“We just got too tight right there about middle of the race on,” Madden said. “When I caught those lapped cars where I couldn’t use the whole racetrack I got in trouble there. I just couldn’t stay down off of (turn) two over there and use the moisture like I could early.

“I left the door open and Brandon was there to fill the spot. You know it kinda give him the line. He was better than we was at the end as far as steering around the bottom for sure. We went to the top trying to get back by Sheppard and give up second for third, but that’s OK. We was trying to get the win instead of run second.”

The semi-retired Moyer, making just his fourth start of the season, was pleased with his runner-up finish. After getting around Madden in the waning laps he trimmed Sheppard’s lead slightly as they negotiated lapped traffic. He couldn’t muster enough of a charge to make a bid for the lead, however.

“You just had to hit your marks just perfect right there,” Moyer said. “We’re happy with getting a (second) here for sure … third, second whatever … it’s all the same if you don’t win I guess.

"It was alright. We had fun. It was a good racetrack. We could move around on there. I thought it was a pretty neat deal. We were just a little bit short there. Parts of the race we thought we had something to work with then it’d go away, like it did for everybody. But we had fun.”

Notes: Sheppard was singing Whynot’s praises after winning his second WoO feature in as many starts at the 3/8-mile oval. “Hopefully (Saturday) we’ll have as good a racetrack as we did tonight," he said. "The track was awesome man. Two different times I’ve been here and both times the track’s been quite a bit different and both times has been pretty awesome. So hopefully we can do it again tomorrow.” … Shane Clanton, the 2015 series champion from Zebulon, Ga., had his night all but end on the opening lap when contact from another car sent him hard into the outside wall on the front stretch. He pitted for quick repairs, but eventually finished 21st. Hours after the race concluded his crew was at working making repairs, which included replacing the right front suspension, along with the j-bar and the car’s driveshaft. … Brian Rickman of Columbus, Miss., was slated to start on the outside of the front row, but he was docked one row for jumping the initial start. … The race was slowed by four cautions, including two for Gavin Landers. … Nineteen cars finished the race, with 14 still on the lead lap. … Among drivers failing to make the main event: B.J. Robinson, Jared Landers, Boom Briggs, Dave Hess Jr., Austin Rettig and Jon Mitchell.