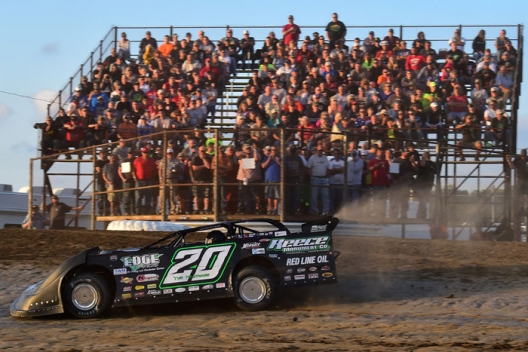 ZANESVILLE, Ohio (July 3) — The Lucas Oil Late Model Dirt Series had its 10th winner in as many visits to Muskingum County Speedway, but it was a familiar face.

Three-time and reigning series champion Jimmy Owens of Newport, Tenn., took the lead from series points leader Don O’Neal of Martinsville, Ind., on the 18th lap and sped away in the Creno’s 50. Owens earned $10,000 for his fourth series victory of the season.

"It feels great to be back in victory lane. We have had some tough luck lately. We had a good finish last night (a runner-up finish at Roaring Knob Motorsports Complex), but before that, we didn't have the finishes we wanted for a few weeks. The crew did a great job getting the car ready tonight. I could run anywhere on the track tonight, high, low, in the middle, it didn't matter.”

Rick Eckert of York, Pa., had his best Lucas Oil Series finish of the season in second while O’Neal settled for third place at the 4/10-mile oval. Eddie Carrier Jr. of Salt Rock, W.Va., finished fourth in the Thursday night special while Earl Pearson Jr. of Jacksonville, Fla., followed his Roaring Knob victory with a fifth-place finish.

Owens withstood a pair of restarts, including one with nine laps remaining, to maintain control after wresting the lead from O’Neal in front of a standing-room only crowd.

"When they went out and watered the track before the fireworks, I think it helped the track a lot,” Owens said. “We have been coming here long enough to know what they are going to do to the track. It smoothed out enough from the heat races, so hopefully we put on a good show for these fans.

“Don and I had a pretty good battle for the lead; we got close a couple of times, but once we were out in front, the car handled so well.”

O'Neal led the first 17 circuits of the race after starting from the pole, but he had his hands full with Owens many of those laps. Eckert moved past O'Neal on lap 23, but could never get close enough to seriously challenge Owens.

"He had the best car tonight," Eckert said of Owens. “We worked on our car all day after last night's run. Right from the start tonight the car was so much better. I felt real comfortable with it tonight. It's great to be back here in front of this big crowd.

“That last restart the only chance I had was that he (Owens) would make a mistake, but he's too good to do that. We are happy to run second and we will be at Portsmouth tomorrow night hoping to gain one more spot.”

O’Neal maintained his lead in the point standings, but Owens gained ground on him in what’s become a two-driver chase.

“We got off to a good start in the feature. I was setting a pretty good pace out there,” O’Neal said. “But then here comes Jimmy, and once he got past me it was pretty much over. Then Eckert got a run on me and I couldn't hold him off.”

Neither of the race’s two cautions were serious. The first was caused by Jason Hughes on the 23rd lap, then again on the 41st lap when Steve Francis and Doug Drown simultaneously slipped over the banking in turns three and four.

Notes: With his 48th career victory, Owens ties Scott Bloomquist atop the all-time series list. … Bloomquist had problems with his primary car in hot laps, and he went to a backup car, which had problems in time trials. He finally got the backup car rolling, transferred to the feature through a consolation race, but finished 23rd in the main event. … Among drivers failing to make the feature lineup: Craig Vosbergen, Aaron Scott, Larry Bellman, Todd Brennan, Jimmy Smith, Doug Kenworthy and Bryan Casey.