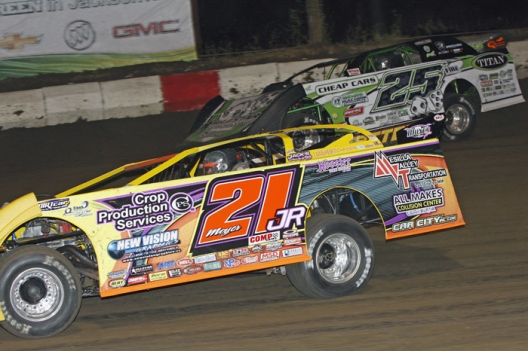 With a convincing flag-to-flag victory in the quarter-mile oval’s 40-lap Wild Man Kelly Classic, Feger became the second driver in as many nights to emerge triumphant on the Hell Tour in his return to action after flipping on Sunday night at Lincoln (Ill.) Speedway.

Feger, 35, rode out a rough rollover during hot laps at Lincoln that forced him to scratch from the remainder of the racing program, but that accident became a distant memory after his flawless march to a $5,000 win at Jacksonville. He roared off the outside pole to overtake front-row mate Billy Moyer Jr. of Batesville, Ark., for the lead at the initial green flag and never looked back.

In an A-Main slowed by just a single caution flag on lap two, Feger stepped away from Moyer’s mid-race challenge to register his second win of 2014 and the 11th of his career on the Summernationals circuit.

“Hard work pays off,” said Feger, who was shaken but otherwise uninjured in the crash at Lincoln. “We got lucky with the roll — we only broke some bolt-on suspension stuff and bent up the body a little — but we put in some long hours the last couple days to get ready. We worked real hard and got results tonight.”

Shannon Babb of Moweaqua, Ill., chased Feger across the finish, ending the feature in second place nearly a half-straightaway behind the victor. The 40-year-old driver snuck around the outside of Moyer to grab the runner-up spot on lap 36 but wasn’t able to make a run at Feger because he became mired in lapped traffic.

Moyer settled for a third-place finish after running behind only Feger for nearly the entire distance. Defending Summernationals champion Brandon Sheppard of New Berlin, Ill., slipped back one spot for where he started to place fourth and Tanner English of Benton, Ky., started and finished fifth.

“I really like this place,” said Feger, whose previous Summernationals this year came on June 18 at Spoon River Speedway in Banner, Ill. “This is one of my favorite little tracks, and we run pretty here good down here. We just don’t come here enough.

“Everything just worked out tonight,” he added. “We qualified good, won our heat — you gotta win your heat and start up front — and had a real good car for the whole feature.”

Feger was never seriously challenged during his romp to the checkered flag, but he did have some anxious moments at mid-race. As he continued to run around the outside wall, Moyer stuck to the bottom and sliced a near full-straightaway deficit to just a car length by lap 24.

Two circuits later, however, Feger moved his racing lane lower on the track. The strategic switch paid immediate dividends as Feger began pulling away from Moyer.

“Early, I felt really good,” Feger said of his Hustler Chassis machine. “Then I don’t know what signal my crew guy was (giving) me, but I guess it was to go down (on the track). I couldn’t quite make out what he kept trying to signal me, so that kind of got me a little nervous. One lap he’d tell me I had a good lead and the next lap he was signaling me to go do something different.

“It didn’t really add up, so it was a little hairy for me out there. And this place is real narrow, so you gotta kind of pick-and-choose in the traffic when you’re gonna take it and when you’re gonna leave it and set ‘em up for another time.”

Once Feger found the optimum groove, he was unbeatable.

“The car felt good anywhere I needed to go,” Feger said, “so it was just being smart and not making any mistakes.”

Babb, who is bidding for his fourth career Summernationals title, differed to Feger’s supremacy following his second consecutive runner-up finish on the Hell Tour.

“We would’ve liked to have won, but Jason was pretty dang good to night,” Babb said. “Starting from outside (the front row), that’s the worst place for him to start if you’re racing him.

“He checked out on us,” added last year’s Summernationals winner at Jacksonville. “We come to him in traffic a little bit, but the track started taking a little bit of rubber and the (lapped) traffic kind of mixed it up for a little bit. I don’t think we had enough laps to do anything with him (anyway).”

Moyer, 26, ran second with Babb behind him for 35 laps before finally ceding the position to the home-state driver. He was satisfied with his outing but wondered what could have been.

“We had a really good car,” said Moyer. “I don’t know if we had the winning car, but Babb kept showing me the nose (near the mid-race point) so I moved down and when I did I was like, ‘Oh, man, this is good.’ Then we reeled Feger in and we were on his bumper.”

Moyer felt that his trouble with slower cars prevented him from mounting a serious bid on Feger.

“Passing Jason is two different things, but I really would’ve liked to have had a chance to go at him,” Moyer said. “But then you got lapped traffic — and man, I’ve been lapped a lot, and I get out of the way and show them guys respect. They weren’t doing that much when we were working on them (running second).”

Race 15 of the UMP DIRTcar Summernationals is scheduled for Thursday at La Salle (Ill.) Speedway for a 40-lap feature paying $5,000-to-win.

Billy Moyer Jr. will start from the pole position after the heat winners redrew. He’s very confident with his machine. “I can’t say enough about this race car,” he said of his Longhorn mount. “Hammering the cushion like I was, this thing just turns.” … Jason Feger and Brandon Sheppard will start second and third, respectively. … Brian Shirley rallied from his heat-race spin to win the B-Main, but he certainly wasn’t happy about being relegated to the last-chance race. He said he was all the way up beside Shannon Babb in the heat and felt he was pinched down by his fellow Illinois driver. … Provisional starting spots in the feature were handed to Jim Moon and Alan Westling (Summernationals), Mike Hammerle (UMP national points) and Ryan Little (track). Westling will have to scramble to get ready for the feature after climbing the turn-four wall during the B-Main. … The track’s covered grandstand is filled virtually to capacity for tonight’s action. … At 9 p.m., the evening’s street stock feature was headed onto the track.

Billy Moyer Jr., Jason Feger and Brandon Sheppard were victorious in the three 10-lap heats. … Moyer’s prelim was the closest race, with the Arkansas standout beating Shannon Babb and Kevin Weaver to the finish line by a couple car lengths. … Sheppard, who is competing at the Summernationals track closest to his home in New Berlin, Ill., ran away with the third heat. … Summernationals contenders Brian Shirley and Ryan Unzicker both were forced to restart at the rear of their heats after spinning to bring out caution flags. Shirley fell two spots short of transferring in the first heat, while Unzicker rallied to finish fourth in the third prelim.

Kevin Weaver of Gibson City, Ill., who won the 2007 Summernationas event at Jacksonville, was the overall fastest qualifier in time trials with a lap of 12.280 seconds in Group 1. He’ll start from the pole in the first heat; other polesitters will be Jason Feger and Brandon Sheppard.

Conditions for tonight's action are very un-Summernationals-like. Temperatures have been in the 60s under overcast skies all day, giving a fall feel to the proceedings. ... Ryan Unzicker of El Paso, Ill., heads into another event as the Summernationals points leader. He thought his status atop the standings was in jeopardy after qualifying poorly Tuesday night at Belle-Clair Speedway and starting 17th in the 40-lap feature, but he made a great recovery to charge forward and finish fourth . … Tanner English of Benton, Ky., jumps back on the Hell Tour tonight. … Also back in action is Kevin Weaver of Gibson City, Ill., a past Summernationals winner at Jacksonville.

The UMP DIRTcar Summernationals continues Wednesday night at Jacksonville (Ill.) Speedway, a quarter-mile oval that has produced some memorable races during past Hell Tours. A 40-lap, $5,000-to-win feature tops the evening’s agenda.

The series returns to Jacksonville for the third straight year and makes its sixth overall visit. Shannon Babb was victorious in last year’s event.

WIth 29 cars on hand, time trials will be split into three groups to determine heat-race lineups.

Wednesday’s program, which includes UMP Modifieds, is scheduled to kick off with hot laps at 6:15 p.m.