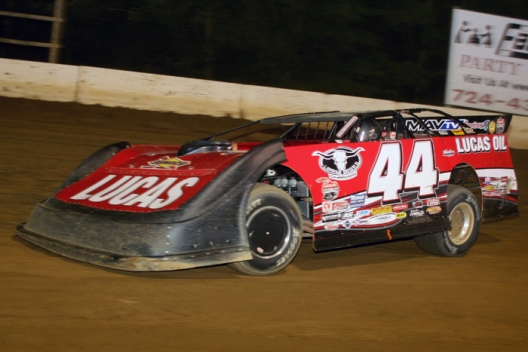 But Earl Pearson Jr. of Jacksonville, Fla., put those frustrations behind him Wednesday at Roaring Knob Motorsports Complex by overtaking fellow second-row starter Scott Bloomquist heading for the white flag for his first Lucas Oil Late Model Dirt Series victory in more than a year.

“It’s been coming all year. We got to second there, and I knew our car was good. We knew we were on a little bit softer tire there, I guess everybody was, and I just stayed right around that bottom and it cleaned up down there for me,” Pearson said in victory lane. “We’ve tore up transmissions, rear ends, everything you can name, and somewhere it had to turn around. We’ve had many, many top-twos here all year, as a matter of a fact, and I knew we was knocking on the door, and we finally got one.”

Sixth-starting Jimmy Owens of Newport, Tenn., nipped Bloomquist at the checkers for second while Eddie Carrier Jr. of Salt Rock, W.Va, finished fourth. Outside front-row starter Mason Zeigler of Chalk Hill, Pa., the 21-year-old who grew up racing at Roaring Knob, led the first 26 laps but slipped to fifth at the finish.

The low groove benefitted Pearson late in the race.

“Scott, I think he took the two (laps) to go (signal), and he started moving down (in turn four), and his car wasn’t good off the corner like mine was … I just got up to him, and he messed up one time and that’s all it took,” Pearson said. “I changed my line down here to just get in a little bit lower and drag my left-side tires across that moisture. It just turned out for me right there, that’s all there is. With five to go, he definitely had a better car, but he moved down there that one time and got in that black, and I just got to him, that’s all it was there.”

Bloomquist tried to rally back higher on the track, but that only led to Owens dropping him another spot exiting turn four on the final lap.

“When Earl got under Scott and they both slid high, I thought, 'Hey, hey, I might be able to beat 'em to the flag here.' It ended up being a great finish and I’m glad the fans and everybody could see us run,” Owens said.

Bloomquist led laps 27-48, but he missed out on what would’ve been his third Lucas Oil victory of the season and series-best 48th of his career.

“We were just trying to stay straight, and I thought we were maybe punishing our tires too much — apparently not. I don’t know. The setup we had on the car, as long as I kept it in the middle and kept some momentum up, it was pretty good.

“And I saw those guys running the bottom there, and I tried to get down there and the car would not, just didn’t stick there. I don’t know if we didn’t have the tires hot enough or not, but that’s where I lost all my momentum and got passed. I tried to move up and do something, but there were so many crumbs off of (turn) four, that just killed us for second place. It was just one of them nights.”

For Pearson, the victory delivered on the promise of his Longhorn chassis that has made major strides in 2014 with Billy Moyer, Jonathan Davenport and others guiding their new cars to victories.

“This is for all my crew guys. They’ve busted their butts all year,” Pearson said, glad to be part of the Longhorn stampede. “They’re picking up momentum for sure. The backlog is big time at the shop, they’re working their butts off five or six days a week right now.”

Roaring Knob provided a satisfying ending for a driver who has run into his share of trouble, including breaking June 21 at Smoky Mountain Speedway in Maryville, Tenn.

“You’ve seen me walking in the pits, just down and out, with this breaking and that breaking,” Pearson said. “At Smoky Mountain, we were running second and had a really good car, and you break a flywheel piece. That’s just something that don’t happen. But anything that can happen has happened to me this year, and thank God we’re turning the corner.”

Four cautions slowed the action, none for serious incidents. Tim Senic spun in turn four for a lap-seven yellow while John Garvin Jr. broke on the 10th lap and was towed off the track. Jason Papich drew a lap-28 yellow and a tangle between Corey Conley and Mike Lupfer brought out the final caution on the 29th lap.