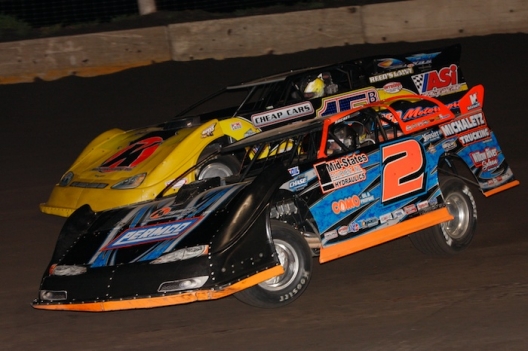 LINCOLN, Ill. (June 29) — Brady Smith lost the lead once during Sunday’s 40-lap UMP DIRTcar Summernationals feature at Lincoln Speedway. He made sure not to do it again.

Regaining the lead when Chase Junghans spun in turn three trying to work under lapped traffic, the polesitting Smith led the rest of the way for a $5,000 victory and the Solon Springs, Wis., driver’s second career series victory and first in seven years.

“I’m really happy to get the win,” Smith said after his second feature victory of 2014. “I lost the lead there. I wasn’t real concerned because I knew he was going to have the exact same problem with lapped traffic that we did. The racetrack was pretty dominant on the bottom.”

“We had a little help from the Big Guy upstairs, I think, and ended up with the lead back, and real blessed to have gotten the win.”

Smith staved off a late-race, high-side charge from fellow front starter Brian Birkhofer of Muscatine, Iowa, who slipped back to seventh early in the race but rallied back to the second spot in the race’s late stages.

“I kind of got a rhythm again, and then the car just started coming to me in (turns) one and two if I got in (to the corner) right, I could start making some moves,” Birkhofer said. “In (turns) three and four, obviously when you’re sixth or seventh, you just move around and try to find a better line. I got rolling there at the end. I would’ve liked not to have seen that caution. I think maybe we had a little something for Brady.”

Brian Shirley of Chatham, Ill., slipped back to third with Birkhofer’s late run while Dennis Erb Jr. of Carpentersville, Ill., and 11th-starting Ryan Unzicker of El Paso, Ill., rounded out the top five.

Unzicker’s fifth-place finish helped him regain the series points lead after Shannon Babb of Moweaqua, Ill., who entered the race with a seven-point edge, retired before the halfway point with a broken radiator.

When the frontrunners faced traffic, they moved higher on the track and Junghans snuck underneath both of them, taking the lead with a move exiting turn four on the 16th lap. Smith hung tough in the high groove for a few laps, but Junghans pulled away and was firmly in command at halfway.

But four laps later, when Junghans tried to slip under the slower car of Mike Spatola in turn three on the 24th lap, the leader spun and lost his chance at winning in his series debut. Smith was back out front for the restart and didn’t face a serious challenge the rest of the way.

Two top-five runners fell out late, including when third-running Brandon Sheppard of New Berlin, Ill., became the third Late Model driver of the night to get on his lid (Jason Feger rolled in hot laps and Bobby Pierce in his heat race; Feger complained of dizziness immediately after his wreck but no serious injuries were reported).

Sheppard’s turn-three rollover, coming after he was squeezed by Shirley entering the corner, drew a brief red flag on the 38th lap, two laps after fourth-running Billy Moyer Jr. of Batesville, Ark., lost a driveshaft and retired.

The series takes a day off before heading to Belle-Clair Speedway in Belleville, Ill., on Tuesday.

Notes: Brady Smith’s only other Summernationals victory came July 13, 2007, when he pocketed a then-career high $10,000 with Shirley running second. … Ten of 22 starters completed 40 laps and 11 drivers were running at the finish. … Myles Moos, Tommy Sheppard Jr. and Steve Lance Jr. were among driver competing with crate powerplants. … Jim Moon, using Chevy's CT 525 engine, scored a 2014 series-best ninth-place finish. … After his flipping accident in the first heat, Bobby Pierce elected not to unload a backup car.

MIchael Kloos went under polesitter Steve Lance Jr. to lead the third lap and cruised the rest of the 12-lap consy. Lance held onto the final tansfer spot as a flurry of drivers battled for third most of the way. A lap-two caution appeared when Ryan Little and Myles Moos tangled in turn two, requiring a tow truck to lift the Moos car off the Little machine.

In his first career Summernationals heat race, Chase Junghans led all 10 laps for the victory. Dennis Erb Jr. pressured Junghans the second half of the race but couldn't find a way past. as the top two pulled far away from the rest of the field. Jason Riggs was third while Billy Drake for the final transfer spot ahead of Justin Reed, who came from his seventh starting spot in the caution-free race.

Poleisitter and fast qualifier Brandon Sheppard outran fellow front-row starter Shannon Babb to win the third heat. Babb finished 1.264 seconds back while Ryan Unzicker, who got a strong start from his sixth starting spot, ended up third. Matt Taylor got the final transfer spot. Two early cautions hampered the action. The first start was called back and a yellow flew on the next attempt when Michael Kloos's right-front corner briefly climbed the left-rear wheel of Taylor after the third-starting Kloos lost several positions on the first lap. Kloos came back to finish fifth.

Brady Smith roared past polesitter Billy Moyer Jr. to lead the second lap and cruised the rest of the way. Moyer held on for second while Kevin Weaver faded in finishing third. Jim Moon got the fourth and final transfer spot over Roger Brickler in the caution-free prelim. Rusty Schlenk started fourth but slipped back on the first lap and never recovered. Ryan Little pulled to the infield and retired early.

Polesitter Brian Birkhofer cruised to victory a first heat race marred by Bobby Pierce's first-lap rollover. Pierce wasn't hurt, but the track elected to rework the track and, combined with the cleanup, there was a 30-minute break. Brian Shirley was nearly a straightaway behind in second while Rich Bell further back in third. Greg Kimmons was a distant fourth in getting the last transfer spot in a battle with Steve Lance Jr. and Mike Spatola, who spun in turn one for an early caution.

At the outset of the first heat Bobby Pierce had a vicious rollover accident in turns three and four on the first lap while running second. He climb out uninjured but his car was heavily damaged. After Pierce's wreck, along with Jason Feger's flip in hot laps, the track elected to work on the surface before resuming the heat races.

Among the last qualifiers, Brandon Sheppard of New Berlin, Ill., blistered Lincoln Speedway’s quarter-mile with a lap of 13.578 to top 33 qualifiers in UMP DIRTcar Summernationals action.

Sheppard will start on the pole of the third heat race. Other heat race polesitters: Brian Birkhofer of Muscatine, Iowa, who is going for his second straight series victory; Billy Moyer Jr. of Batesville, Ark.; and first-time series entrant Chase Junghans of Manhattan, Kan.

Jason Feger of Bloomington, Ill., scratched from time trials after his car bicycled and rolled before landing on its wheels in hot laps. He was able to climb from the car under his own power, but immediately after the accident was complaining of a little dizziness.

The series nears its midpoint in heading to the quarter-mile oval that frequently draws healthy car counts with Shannon Babb of Moweaqua, Ill., holding a seven-point lead on Ryan Unzicker of El Paso, Ill., in the chase for the series title.

Babb will among several drivers trying to become the first repeat series winner at the track that’s had seven winners among its seven series races stretching back to 2005, when Babb took the checkered flag.

The 33-car field was split into two groups for time trials with four heat races sending four drivers apiece to the main event. Two consolation races will follow with provisional starters round out the 22-car field.

Jason Feger had a rollover accident in turn during hot laps; he climbed out OK but Logan County paramedics were checking him out. .... Brian Birhofer of Muscatine, Iowa, won Saturday’s series stop at Federated Auto Parts Raceway at I-55, pocketing $10,000 after overtaking Billy Moyer with four laps remaining. … The biggest mover in the points was fifth-place Bobby Pierce, still trying to regain ground after skipping a race eight days ago. He’s within 107 points of leader Shannon Babb (80 points is the maximum a driver can earn). … Pierce won last year’s visit to Lincoln, which then paid $10,000. … Among surprise entrants is Chase Junghans of Manhattan, Kan., the World of Outlaws Late Model Series Rookie of the Year candidate who dropped by Lincoln on his way home from Lernerville Speedway in Sarver, Pa. …. Jim Moon has rejoined the tour. … Mike Spatola was a late entry and Brian Diveley called ahead to enter en route from Springfield, Ill.