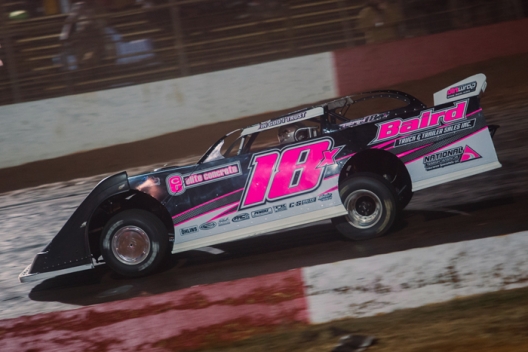 EASTABOGA, Ala. — There have been five two-time winners at the Ice Bowl. But in 26 years of the annual winter event leading to this year’s race only once had a driver been able to claim back-to-back victories. Michael Page changed that. And he did it convincingly.

Page, of Douglasville, Ga., led all 50 laps of Sunday’s race at Talladega Short Track, winning the track’s marquee event for the second straight season. In doing so, Page matched Kenny Merchant of Ruston, La., who accomplished the same feat during the ’97-’98 seasons.

Starting from outside of the front row, Page had little trouble grabbing the lead on the opening circuit from polesitter John Ownbey of Cleveland, Tenn. He then set a blistering pace around the third-mile, red-clay oval that began taking rubber by the halfway mark. Fourth-starting Jason Hiett of nearby Oxford, Ala., first worked his way around his second row mate Justin Shipley of Douglasville, Ga., and then rolled by Ownbey.

Hiett gave chase to no avail. While closing in on Page occasionally in traffic, Hiett eventually settled for second, his third top-three Ice Bowl finish in as many seasons. The pole-sitting Ownbey didn’t fall far, but after dropping a couple spots, he was never after to make up the lost ground and settled for third. Overall fast qualifier Billy Ogle Jr. of Knoxville, Tenn., finished fourth in a rare Talladega appearance, while Ronnie Johnson of Chattanooga, Tenn., rallied from the 10th row to finish fifth.

With Hiett in tow, Page had little trouble negotiating slower traffic. His only scare came on lap 23 when he rubbed fenders with Jason Lively. The two made contact in turn three and Hiett was able to nose alongside as they raced down the frontstretch, but Page managed to clear Lively before they entered turn one and scoot away again.

“I knew they were behind me and you can’t ride too long because the track was pretty racy (at the time),” said Page. “You could hang the middle there. I was expecting them to come try and hang me on the outside. I just had to get it quick. (The slower cars) weren’t doing nothing wrong, just trying to stay on the lead lap. It just gets real tricky on a rubbered up track like that.”

Page said picking the right tire before the 50-lapper and patience during the race was key.

“I think we did the right tire choice. We were kinda back and forth with it,” he said. “But I knew in my gut what I needed to do and it worked out for me. You can get in (the corner) there as hard as you want, but if you can’t come off right … . I just backed the corner up and keep the car straight and come out good … just keep the car straight and didn’t burn the tires off.”

Hiett said he was hoping the lapped traffic would offer a chance to put his Longhorn Chassis into the lead, but it simply never materialized.

“I was cheering them on when we was in that lapped traffic, but all them guys were very respectful on that,” said Hiett. “All those guys have run up front and they know how that works. They know it’s tough when you get in lapped traffic and lose a race like that. I would hate to see Michael lose a race like that. Granted, we would rather win the race, but it’s a tough deal when you lose like that and you’ve got the best car.

“Our car was a little off from Page’s, but really if we’d been in the same car as he was, I don’t think we’d ever got by him. Just the circumstances of the track rubbered up you know, I think we would’ve had a tough time even passing him like that just because there’s no where to go unless lapped traffic messes you up. And it kinda went pretty smooth.

“We were a second place car. Michael was the best car.”

Notes: Ronnie Johnson blitzed through the field early. He was up to fifth by lap 30, but as the track took rubber, he couldn’t climb any further. … Page said rather than come to the open practice sessions midweek, he opted to stay home where it was a little warmer. “My car owner wanted me to come practice and I told him it was too cold and I had too much to do, so I didn’t get to come practice,” Page said. “We just showed up (Saturday). I figured I knew what to do to make the cars good here and I’m just glad it worked out.” … Six cautions slowed the action. … Four former Ice Bowl champions were in the field — Page, Tim Roszell, Johnson and David Brannon. While Page (’17-’18), Brannon (’16) and Roszell (’15) represented the last four Ice Bowl winners, Johnson’s only Ice Bowl victory came in the inaugural running of the race back in 1991. … Page said the cold temperatures — it was about 38 degrees at the conclusion of the main event — effected him. “I haven’t felt my feet in about two hours,” he said. “You can’t feel your peddles. That’s the hardest thing here, so yeah, I’m very cold.” … The five drivers other than Page with multiple Ice Bowl wins include Merchant (’97-’98), Jody Summerville (’96, ’02), Danny Peoples (’93, ’99), Shane Clanton (’03, ’05, ’11) and Ray Cook (’09, ’12). Clanton is the only three-time winner and Summerville’s first victory came only after Mark Minor was found light at the scales. … Georgians have dominated the Ice Bowl, with 11 victories in the 27 events. Home state drivers have won six times and Tennesseans four. North Carolina (3), Louisiana (2) and Kentucky (1) represent the other six.

Patiently waiting for the top lane to open up, John Ownbey of Cleveland, Tenn., drove around leader Billy Ogle Jr. of Knoxville, Tenn., midway through the first heat to earn the pole for the 27th annual Ice Bowl. Ogle, who set the overall fast time at 14.074 seconds among 43 qualifiers earlier in the day, held off TST track champion Dallas Cooper to finish second, claiming the fifth starting spot for Sunday’s $6,000-to-win 50-lapper.

Sixteen cars are locked into the main event with the remaining eight spots to be determined through a pair of consolation races Sunday afternoon. Page, the defending Ice Bowl winner, won the second heat and will join Ownbey on the front row.