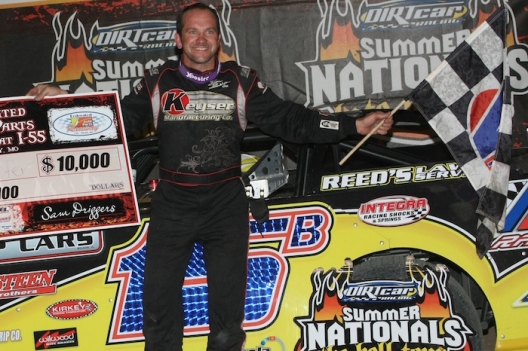 PEVELY, Mo. (June 28) — Repeating a victory over Billy Moyer at Federated Auto Parts Raceway at I-55 from four weeks earlier, Brian Birkhofer of Muscatine, Iowa, overtook the Hall of Famer from Batesville, Ark., late in Saturday's 40-lapper for a $10,000 UMP DIRTcar Summernationals victory.

“It’s been years I’ve been down here and never won, and now I’ve won two in a row,” Birkhofer said after a brief rain shower shortened his visit to victory lane. “It’s a pretty awesome feeling.”

Birkhofer stalked Moyer most of the main event, but drew closer in the second half of the race before finally working underneath the higher-running Moyer exiting turn four on the 37th lap.

Running the middle of the track, Birkhofer led the final four laps and ended Moyer’s three-race win streak in Summernationals action at I-55 stretching from 2010-’12 (last year’s event rained out). Birkhofer also overtook Moyer on May 31 at I-55 to lead the final nine laps for a MARS DIRTcar Series victory.

“I was able to just maneuver down the racetrack a little bit and didn’t have to rely on going all the way up to the top. I got to race on a little bit smaller racetrack than he did,” Birkhofer said. “He did everything he could to hold me off.

“I kept talking to myself, I was overdriving it some behind him, and (getting the car sideways) and I was cussing myself pretty good a couple of times down the straightaway. I was able to pressure him a little bit. Hey man, he’s a hard guy to pass just because the talent the guy’s got.”

Moyer found himself in a similar predicament as a month ago — falling victim to Birkhofer in the race’s late stages.

“He did a good job. He just kind of rode back there and looked over my weak spots,” said Moyer, in his first season driving a Longhorn Chassis. “We just, it’s just learning this new car and making mistakes. Last time I was here he got us and I felt like we left it too free, and this time I had it too tight. Maybe if we come again I’ll get it in the middle and we’ll be OK.”

In Saturday's race where rain began to sprinkle near the halfway point, Moyer finished just .336 seconds behind as the top two separated themselves from the field, especially late in the race.

Eighth-starting Bobby Pierce of Oakwood, Ill., held the third spot the final 12 laps while former track champion Randy Korte of Highland, Ill., who ran third most of the way, settled for fourth. Brady Smith of Solon Springs, Wis., rounded out the top five finishers and rain picked up after the checkers, causing the rest of the program to be delayed more than 30 minutes.

Jesse Stovall of Galena, Mo., ran fourth early in the race, but dropped back and retired with a mid-race flat tire.

A red flag appeared on the 20th lap when Tim Manville’s right-side tires got up on the turn-one cushion and eventually the wall for a slow rollover accident. Manville's car ended up on its lid but, after track workers flipped the car over, climbed out unhurt. His car was towed off the track.

Otherwise, two cautions appeared before a lap was complete. The first start was called back, then the second appeared when Mark Burgtorf ended up spun in turn three (fellow provisional starter Gary Christian retired at the same time).

The series heads to Lincoln (Ill.) Speedway on Sunday for the 12th race of the tour, originally scheduled for 33 races but plagued by five rainouts.

Notes: The event marked just the second series race that at least one of the drivers currently among the top four in series points — Shannon Babb, Ryan Unzicker, Brian Shirley and Brandon Sheppard — failed to crack the top five. … Babb, of Moweaqua, Ill., had to make a late-race consolation pass to make it into the main event and gained a handful of spots to finish 11th. … Shirley of Chatham, Ill., started outside the second row but slipped back to seventh on the first lap and never recovered. He finished seventh. … Unzicker, of El Paso, Ill., was a lap down in 17th and Sheppard, of New Berlin, Ill., was the last driver on the lead lap in 16th.

Third-starting Michael Kloos made a three-wide pass on the inside on the backstretch of the first lap and rolled to a 12-lap victory. He transferred to the main event along with series points leader Shannon Bbb, who went to the high side to take the second and final transfer spot from Timothy Culp on the 10th lap. Culp settled for third with Tim Manville further back in fourth.

Taking command on the restart following polesitter Paul Roider's turn-four spin on the third lap, Austin Rettig led the rest of the way to transfer to the B-main along with Alan Westling and Butch Kruckeberg, who nipped Clay Baumann for third at the checkers. Roider retired and Michael Vanderliet Jr. lost a transfer spot when he spun inside turns one and two on a restart, then spun again on the ninth lap trying to take third from Baumann.

Brian Birkhofer got the jump from outside the front row and led all the way. The second place was up for grabs much of the way with Bobby Pierce finally getting the spot by holding off polesitter Jason Feger, who ended up third. Brandon Sheppard got the fourth and final transfer spot over series points leader Shannon Babb. Debris drew a lap-three caution and Michael Vanderliet spun in turn four for a lap-six yellow.

Billy Moyer, going for his fourth straight series vicotry at I-55, cruised from his pole position for a 10-lap victory. Outside front-row starter Brady Smith held the second spot all the way as they pulled away from the rest of the field. Rickey Frankel won a duel with fellow second-row starter Billy Moyer Jr. for the third spot as both transferred to the main event. Michael Kloos was fifth. The first start was called back.

Saved by a mid-race caution that kept him out front, Randy Korte won the second heat. Polesitter Dennis Erb Jr. fell behind Korte at the outset, but he got rolling in the middle groove and worked around Korte on the sixth lap. But a yellow flew reset the field with Korte out front, and he held on the rest of the way with Erb finishing second and Jack Sullivan just behind in third. Sixth-starting Terry Phillips rode the high groove to a fourth-place finish. The first start was called back and two more cautions flew when Alan Westling spun at the opening in the infield wall between turns one and two on the sixth lap, then again inside turn two on the ensuing restart.

Third-starting Brian Shirley won a back-and-forth battle with Jesse Stovall for a victory in the first heat. Each driver repeatedly used the lower groove to work past the other, with Stovall making contact on his way past to regain the lead on the sixth lap. Shirley stuck with him and made the winning pass in turn three on the eighth lap. Polesitter and early leader Scott Weber slipped back to finish third while Ryan Unzicker was fourth as the final driver transferring to the feature lineup. Fifth-place Jeff Herzog will be on the pole for the B-Main while Dustin Walker scratched after breaking an engine earlier in the night.

Scott Weber of Festus, Mo., was fastest among 38 qualifiers Saturday at I-55 with a lap of 12.938 seconds on the third-mile oval.

He’ll start on the pole in the first of four heat races. Other heat race polesitters: Dennis Erb Jr. of Carpentersville, Ill., Billy Moyer of Batesville, Ark., and Jason Feger of Bloomington, Ill. Series points leader Shannon Babb will have some work to do after being 10th quickest in his qualifying group.

The circuit returns to the I-55 oval owned by Ray Marlar and Ken Schrader for the first time since 2012 after last year’s event was rained out.

Billy Moyer of Batesville, Ark., will be going for his fourth consecutive Summernationals victory at the high-banked third-mile oval after winning 2010-’12 races. He’s be among previous series winners expected at I-55 along with Shannon Babb of Moweaqua, Ill., and retiring Randy Korte of Highland, Ill., who will likely making his final career series start at I-55.

Babb comes into the race as the new series points leader. His third-place finish Thursday at Clayhill Motorsports Park in Atwood, Tenn., gave him a one-point lead on Ryan Unzicker of El Paso, Ill. Friday’s scheduled race at Paducah (Ky.) International Raceway was rained out.

With 38 cars are entered, time trials will be split into two groups folllowed by four heat races (four drivers transfer apiece) and two consolation races. Provisional starters round out the 22-car field.

Brian Shirley of Chatham, Ill., won Thursday at Clayhill and has two victories in the last four series races. … Drivers rejoining the tour at I-55: Billy Moyer, Brady Smith, Brian Birkhofer and Jason Feger. … Moyer will be gunning for his 85th career series victory which would tie Shannon Babb atop the all-time series list. They’ve been trading the honor back and forth through the first 10 series races. … Timothy Culp of West Monroe, La., led 33 of 40 laps Thursday at Clayhill, but an overheating engine dropped him from contention. He’s at I-55 after swapping powerplants. ... With this weekend's MARS, MLRA and Corn Belt Clash action at I-80 Speedway in Greenwood, Neb., and Adams County Speedway in Corning, Iowa, rained out, some of those regulars are on hand, including former MARS champs Jesse Stovall of Galena, Mo., and Terry Phillips of Springfield, Mo. Reigning MARS champ Tony Jackson Jr. of Lebanon, Mo., is in the pits, but he's not racing because he decided against buy more soft tires he doesn't have. He's spending the evening helping out fellow Missouri driver Austin Rettig with his Rocket Chassis.