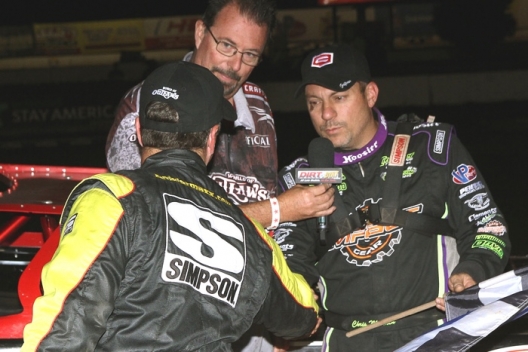 JOLIET, Ill. (Oct. 13) — Chris Madden of Gray Court, S.C., found The Dirt Track at Route 66 Raceway much to his liking on Friday night.

The first-year World of Outlaws Craftsman Late Model Series regular was absolutely flawless in the opener of the inaugural Chi-Town Showdown weekend, setting fast time, winning a heat race and dominating the 50-lap feature from flag-to-flag to pocket $10,000 for his sixth victory of 2017 on the national tour.

No one was able to seriously challenge Madden, who beat fellow Longhorn Race Car campaigner Rick Eckert of York, Pa., to the finish line by a comfortable margin of 3.151 seconds in the first-ever WoO event at the 4/10-mile oval promoted by Sherri Heckenast.

Runaway WoO points leader Brandon Sheppard of New Berlin, Ill., finished third after starting sixth in the Rocket Chassis house car, keeping him one win shy of the circuit’s single-season victory record of 18 set in 2016 by Josh Richards of Shinnston, W.Va. WoO Rookie of the Year Devin Moran of Dresden, Ohio, ceded third to Sheppard in the final laps and finished fourth — the same position he started — in Tye Twarog’s XR1 Rocket while 11th-starter Bobby Pierce of Oakwood, Ill., settled for fifth place after climbing as high as fourth from the 11th starting spot.

Madden, 42, wore a big smile after claiming his 15th career WoO triumph to solidify his hold on second place in the points standings with just three features remaining on the 2017 schedule, including another $10,000-to-win program on Saturday night to cap the Chi-Town Showdown.

“Everything happened the way that it should,” Madden said. “We picked a little young man up there (for the feature redraw) and he drew a 1 (pole position) for us — he put it in our hands to mess it up.

“Overall tonight, we had an awesome race car. This is a brand-new hot rod that Longhorn’s built and we broke it out (two weeks ago for a Lucas Oil Late Model Dirt Series doubleheader in Georgia). We just had some issues there that we got worked out and found some problems and got ‘em fixed this week. I’m looking forward to what it holds for us in the future for sure.”

The convincing victory also helped Madden put a difficult month behind him. He was recently disqualified from his finishes in last month’s UMP DIRTcar-sanctioned World 100 weekend at Eldora Speedway in Rossburg, Ohio, because one of the tires he used failed laboratory testing, subjecting him to a fine and a suspension from World Racing Group-affiliated events.

“It’s been very stressful,” Madden said of the situation he found himself in. “Really, I guess I need to give all the credit to my wife and my family and my kids at home for being supportive to me through the whole thing. Never one minute did I go without their support. You can’t measure that.”

Madden’s 30-day suspension from UMP DIRTcar and WoO events ran from Sept. 10-Oct. 10, but he was allowed to run the Sept. 22-24 WoO races in Kansas and Oklahoma under a “deferral” while his tire’s laboratory results were being examined. The suspension then ended before the Chi-Town Showdown, preventing him from missing a WoO event.

After his Joliet checkered flag, Madden again maintained that he did not knowingly put an illegally-altered tire on his car at Eldora.

“I know what I did. God knows what I did. And most of these people out here in this pit area know what I did besides some of them,” Madden commented. “As a professional side of it, I’ve tried any way possible to try to help the situation because I won’t be the last one (to be penalized for a tire infraction). It’s gonna happen again. I’d love to take a polygraph test if anybody wants to pay for one and send ‘em my way to my house. I’ll take one to prove my innocence. That’s basically all we can do about it.

“I got a chance to win that race (World 100). I’m gonna win it one day, and the last thing I’m gonna do is cheat on tires to do it. You know they’re gonna check tires, so common sense just plays a role there. Anybody in their right mind knows not to do things like that.

“We’ve been very professional about it,” he added. “I’ve took it on the chin and done the best I can do with it. In my heart, I can lay my head down and go to sleep at night because I know what was right and what was wrong. God knows what it was, and I really don’t care what the rest of them think.”

Eckert, 51, hustled forward to reach second place with a pass of Frankfurt, Ill.’s Frank Heckenast Jr. — the brother of Route 66 Raceway’s promoter — just after the halfway point. He couldn’t stick with Madden after two restarts over the remaining circuits, however.

“I got a couple breaks there on some restarts and my car was really good around the bottom of one and two,” Eckert said. “I could just stick and never slip, and them guys would slip off two and I could drive by ‘em. Then once I got to second, Chris could carry a lot more momentum than I could.”

Eckert noted that his “motor’s still missing” for an unexplained reason, which hurts his qualifying effort early in the night. But he said the problem worked to his advantage with the slower conditions in the feature because “it’s almost like traction control — it misses enough to make us not spin the tires.”

The 24-year-old Sheppard felt fortunate to salvage a third-place finish after a rough-and-tumble 50-lap run.

“I got into the back of somebody with the left-front,” said Sheppard, the presumptive 2017 WoO champion after ending the night with a 294-point edge over Madden. “Then a little bit after that I think a dirt clod must have knocked the nose down, caved it in on the left front, and when it did that I couldn’t really steer across the center like I needed to. A dirt clod knocked the spoiler off too.

“I think we had a pretty good car, but we just got to work on this thing a little bit to get as good as Madden is.”

Three caution flags slowed the race, on lap 19 for Steve Casebolt of Richmond, Ind., slowing; lap 30 when Heckenast fell off the pace after falling from second to eighth in just four circuits; and lap 41 when Shannon Babb of Moweaqua, Ill., slowed while running seventh.

A red flag was displayed on lap 18 for Sheppard’s father, Steve Sheppard Jr. of New Berlin, Ill., whose rare appearance behind the wheel of a family-owned machine in 2017 was cut short when something kicked up on the track entered his cockpit and struck his helmet. He was momentarily stunned as he pulled up lame in turn four but was found to be OK after being checked by safety workers.

Notes: Fifth-starter Shane Clanton of Zebulon, Ga., ran as high as third and was in the top five throughout the race’s first half before fading to an eighth-place finish. … Tyler Erb of New Waverly, Texas, spun on the homestretch midway through the night’s second heat after contact with Dennis Erb Jr. of Carpentersville, Ill., but he rallied to transfer in the prelim and then advanced from the 14th starting spot in the feature to finish sixth. … A multi-car scrape in turn two on the opening lap of the third heat forced Chad Simpson of Mount Vernon, Iowa, and Boom Briggs of Bear Lake, Pa., to the pit area with significant damage to their cars and left Steve Sheppard Jr. handicapped for the remainder of the race with bent bodywork. Simpson returned to finish 11th in the A-main while Briggs scratched from further action. … Dennis Erb Jr. started the 50-lapper from the outside pole but slipped back to sixth on the opening circuit and retired from the race after just seven laps. …  Officials scrapped the B-main because several drivers in the field held guaranteed provisional starting spots (as a result of qualifying for the track’s June 28 WoO event that was originally scheduled to be complete during the Chi-Town Showdown weekend but was ultimately canceled) and several others scratched for the evening.