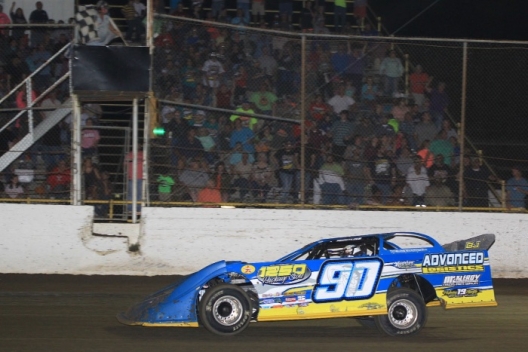 Sticking with the low groove for most of 75 laps, the Columbus, Miss., driver finally inched ahead of last year’s race winner Tyler Erb for good with five laps remaining and captured a career-high $10,000 paycheck in the Mississippi State Championship Challenge Series finale.

“It feels great. My biggest win ever, moneywise, yeah, I’ve been chasing this thing for a long time and I finally got it,” Rickman told announcer Ross Tingle in victory lane, confident he could win “if I just hit my marks and come off (the corners) straight.

“I knew (Erb) was going to be driving the wheels off of it. It just paid off, I just made good smooth laps. Like I said, we all had a good clean race with all of us … it was a damn good race.”

Erb, who started outside the front row and led more than 65 laps, repeatedly jumped the cushion in the final laps as Rickman closed out the victory at the tight quarter-mile oval. Seventh-starting Dane Dacus of Lakeland, Tenn., briefly held the second spot after surviving a few mid-race scrapes while 17th-starting Kyle Beard of Trumann, Ark., and Ashley Newman of Ripley, Tenn., rounded out the top five.

Timothy Culp of Prattsville, Ark., the 2014-’15 Gumbo Nationals winner, started on the pole and contended in the first half of the race before slipping back to finish seventh. Chad Trash of Meridian, Miss., retired 20th, but held on to win his first MSCCS championship.

Rickman, who led a few laps in the second half of the race when Erb briefly experimented with the groove, slipped back to third on the final restart. But Rickman regained second from Dacus in the race’s waning moments. When Erb slipped slightly off the backstretch, then got out of shape in turn four with five laps remaining, Rickman pounced and took a lead he’d never give up.

“Dacus was real good. I think he might’ve been a little bit better on the bottom than me, but I think he slipped up. As long as I could keep it running on the bottom and not slip any, I knew I was going to be OK,” Rickman said. “They were kind of — not necessarily overdriving — but they were missing their marks a little bit — and I think that helped me get back by Dacus. And it’s so hard hitting that (high-side) cushion lap-after-lap to be so smooth.”

Indeed, while Erb cruised comfortably ahead much of the race, the high line became trickier and trickier. The driver from New Waverly, Texas, hated seeing so many cautions, but Erb couldn’t talk himself into switching lanes, either.

“I wanted to go down there, but I would’ve been mad at myself if somebody would’ve driven by me on the outside,” Erb said. “I committed up there, and you live and die by it, and tonight I died. It is what it is, you know?”

Erb said he was “giving it everything I had, and just came up short” in the final laps as his No. 91 found the concrete in turns three and four more than once.

“At the beginning there when there was a lot of brown (in the track surface), I could really take off and get going. But as the race went on, it got harder and harder to restart,” Erb said. “And that top in (turns) three and four was bad. I could maintain, at best, over there, and in (turns) one and two I’d made up all my ground. I just made a couple of mistakes. Not trying too hard, just trying to stay smooth and maintain.

“And the (cushion) just go thinner and thinner and thinner. That last five or 10 laps, I jumped the cushion twice in three and four, and started trying to make up for it. … Congrats to (Rickman), he did a really good job. It just wasn’t our night.”

Dacus was twice part of cautions — twice in tangles that included Mike Palasini Jr. — but both times was restored to his position, giving him a chance to contend late in the race, including when he got up to second and pressured Erb after the final restart.

“We started off too tight and just had to bide our time and let the racetrack kind of burn off. We got better the longer we ran … we just, towards the end, once we got some heat in the tires, we just got a little too tight,” Dacus said. “I’m proud of my guys. They did a good job. I put us behind the eight ball last night in qualifying, didn’t do a good job there. We kind of dug ourselves out in the heat race and starting seventh (in the feature) and ended up third, so a pretty decent weekend.

“We tried to move around throughout the whole race, but we just wasn’t that good anywhere. We just seemed to be a little bit better on the bottom, so we just tried to make the best out of it.”

Notes: Brian Rickman notched his third series victory of the season and sixth of his career. … Erb, a regular on the World of Outlaws Craftsman Late Model Series, posted his third straight runner-up finish. “I kind of wish we were getting this hot in the middle of the July, but I’ll take it, and have some momentum going into the next couple of weeks,” he said. … Four-time MSCCS winner Davie Breazeale was part of a lap-three caution and retired before halfway. … B.J. Robinson of Shreveport, La., was the first retiree when his car climbed the wall exiting turn two. … Fellow Louisiana driver Robbie Stuart also retired when he found the concrete midway through the feature. ... Shane Stephens made a brief appearance in the third spot but dropped back and retired early. … Tanner Kellick was part of the two late-race cautions, first in a tangle with Doug Sanchagrin and then when he had a flat left-rear tire.