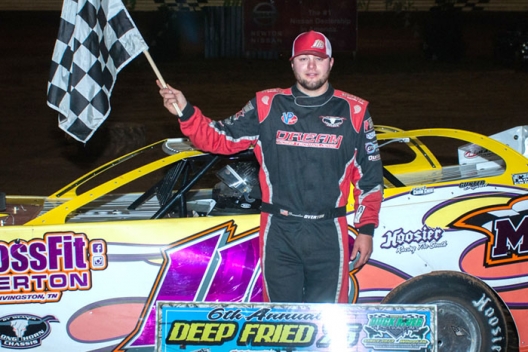 WHEEL, Tenn. (Sept. 30) — On paper, starting on the front row and leading all 75 laps for a flag-to-flag victory may seem a little easier than having to use a daring slide job late in a race to grab a win after starting on the eighth row.

It even sounds easier. But when comparing the two, Brandon Overton is quick to point out the difference, and that leading-the-full-distance isn’t quite as easy as it may seem. Of course, after thoroughly whipping his fellow competitors at Duck River Raceway Park for his second straight five-figure payday, he may have a hard time convincing anyone.

“They told us up there at the drivers' meeting no signals, no sticks, none of that stuff, so I didn’t know if I was far ahead or not,” Overton said. “When I seen the caution, at least I could tell. You know the car felt good, but sometimes you don’t ever know. You don’t know who’s on the top, who’s on the bottom. At least when the caution come out, I knew I was OK.”

Overton’s $14,000 winner’s haul comes on the heels of his $20,000 windfall at Magnolia Motor Speedway in Columbus, Miss., just a week earlier. At Magnolia, however, Overton raced his way into the lead after starting 16th, a feat he said isn’t always as difficult as leading every lap.

“It’s definitely harder being out front because you don’t know how hard to push it, especially when they don’t let you have no signals or nothing,” he said. “That’s really nerve-wracking in there. At Magnolia, I could judge off everybody. I was sitting there watching people. I was reeling them in and I wasn’t driving (hard) so I knew I was in the clear there. That’s way easier. You can sit there and judge the car in front of you.

“But when you ain’t got nobody to judge and all you’re judging off of is the lapped traffic, that don’t really tell you anything. Especially when I kept looking at that (scoreboard) and I could see everybody else swapping around from second on back. I could see Dacus fell back to fourth or fifth maybe one time, so I knew they were still racing, so I didn’t know how far (ahead) I was or where they were at. So it’s definitely way easier to be behind than it is to be out front just setting a pace.”

Overton made it look easy nonetheless. Blasting into the lead from outside of the front row, he pulled ahead of Dacus and held a two car length advantage by the time they reached turn three. Reaching lapped traffic on the ninth circuit, Overton continued to put distance between himself and Dacus, while Riley Hickman, Billy Moyer Jr. and Jameson battled behind them. Erb meanwhile began working his way forward from the fourth row, picking off one car at a time as he rotated around the hub.

“I didn’t just charge in there real hard the first couple of laps. I just slowly eased down to the bottom,” said Erb. “One lap I was right behind Vic (Hill) and I was pretty good on him, but everybody ahead of us was leaving us. Well, I ran in too hard once and turned underneath him in (turn) one and got like all four tires almost in the infield it felt like. Then I pulled up beside him and he kinda chopped me and I was like, well in the next corner I’ll do that again.

"I just moved down in (turns) one and two and I didn’t have to push my car really, really hard, but I could make up so much ground in turns one and two almost in the infield, right up against the skidder tires and I could pull even with them guys down the back straightaway. As long as they didn’t chop down too hard I could run in there enough to make spots.”

Erb said finding the extremely low line before those in front of him was the key to his runner-up finish.

“They would charge in so hard trying to get under these lapped cars, when they would slide out I would just slow down and park it as close to them tires as I could and I eased past them,” said Erb. “Then I looked up at the board when we got to second and it was only like lap 30. So I was like, 'This is pretty good,' but then I couldn’t even see Overton. He was three-quarters of a track ahead.”

Erb finally got his chance to see the back of Overton’s Randy Weaver-prepared Longhorn chassis when Brent Larson spun on the front stretch as Overton zipped by.

“On the restart I thought maybe I could drive up under Overton in turn one and two, but he was just better than I was,” said Erb. “He could use the whole race track and for like 50 laps I had to charge, squirt, stop, and my tires were killed. Starting eighth, I think it was pretty good, because I don’t think it was a whole lot of passing.”

Passing became even more difficult after the halfway mark. Overton pulled ahead of Erb by more than three seconds and quickly caught the tail of the field again, but rather than push the issue he opted to fall in line and ride out the final 15 laps.

“As soon as I got to that pack of cars, when I got behind (Brad) Skinner, I missed that rubber strip just a little bit. I just opened my entry just a little bit and he drug me,” said Overton. “He put like a car length or two on me. So I knew if I missed it just that little bit, if somebody tried to get a whole car width out of it, they wouldn’t be able to pass me. They had me worried at the end there because they started slowing up real bad getting in, but like I said, it would’ve been hard for somebody to (pass). Somebody would’ve had to have been up against the fence digging to drive around us.”

Polesitter Dane Dacus of Lakeland, Tenn., admitted he wasn’t sure what to expect when he took the track for his heat on Friday. “We were a little worried about (the track) after hot laps when they started working it right before qualifying, but it turned out really good,” Dacus said. “Bob’s crew did a good job so far. Hey, hopefully it continues to be this racy.” … Brandon Overton of Evans, Ga., will start the A-main from the front row after winning the second heat. Overton said the main event could come down to car management. “Seventy-five laps is just a long time (at) a little short race track like this,” Overton said. “I guess just keep all the fenders on it and see what we’ve got there at the end. If we don’t win another race from here on out, it’s been a damn good year.” … Riley Hickman of Ooltewah, Tenn., the 2014 Deep Fried 75 winner, was happy with his Capitol Race Car after his heat victory Friday. “We’ve got a pretty good piece,” said Hickman. “Marshall (Green) and them guys over there have give us a really good race car here lately.” … After finishing fifth in the B-main, Daniel Miller of Lynchburg, Tenn., was happy to be in the main event considering the trouble he had during Friday’s prelims. A bracket on his front bumper broke during qualifying and folded the nose under his car. He then experienced steering problems in his heat, relegating the former track champ to a ninth starting spot in the B-main. … Jay Scott of Fayetteville, Tenn., had trouble in prelims on Friday as well, as he hooked a rut and hit the wall during qualifying. With no qualifying time, Scott started 10th in his heat and finished seventh, one spot short of transferring. He grabbed a starting spot in the feature after finishing third in the B-main in Anthony Bruce’s Black Diamond Chassis. … Billy Ogle Jr. of Knoxville, Tenn., and Kasey Hall of Geraldine, Ala., didn’t return on Saturday.