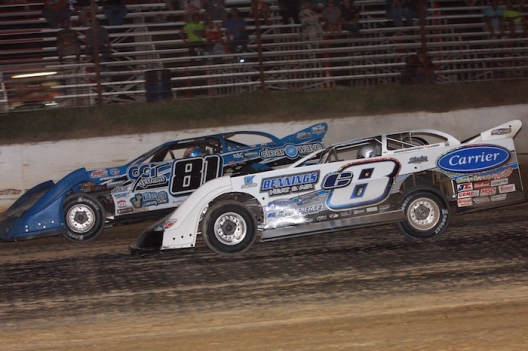 But as the laps clicked off, Culp’s No. c8 stayed out front and comfortable ahead of Shirley, who might’ve wondered if he was mistaken.

“I kept looking up at the scoreboard to be honest,” the 33-year-old Shirley said. “I looked at lap 20, I looked at lap 25 and then I kept seeing him struggle to get by lapped traffic and I knew, it was about lap 30, I said, 'This things going south.' That's when we crept back up on him and it just really worked out.”

Worked out for Shirley to the tune of $5,000 as he made the winning pass on lap 34 for his second series victory in the last four races and the 14th of his career, along with helping the third-place driver in series points gain ground on series points leader Shannon Babb, who moved into a one-point lead on second place Ryan Unzicker.

“I don't know that I would have got around him” if Culp’s engine didn’t give up with seven laps remaining, Shirley said. “But I knew from lap three he was blowing up, so I just knew to bide my time and that's about what it was. It was just being at the right spot at the right time. Tonight was our night to be in the right spot.”

It was Culp, of West Monroe, La., who appeared to be in the right spot for most of the race as he started on the pole and stretched his margin to a half-straightaway much of the race. But in trying to become the first Louisiana racer to win a Summernationals event, Culp knew something was amiss.

The slight 23-year-old lost his power steering early in the race and later discovered that a broken water pump disabled his car’s fan, cut the power steering lines — and allowed the water to drain from the engine, meaning it was overheating throughout the race before melting down in the final laps.

Not only did Shirley go by, but four others went past Culp in the closing laps as his engine sputtered to the finish. When Shirley went past on the backstretch, Culp thought he was through, but he managed to limp to the finish, heading to the infield as he took the checkers.

“I thought it just died (on lap 34); I thought it was done so I was about to pull in and it picked back up and I said 'Well, heck, well maybe I can (finish) top three (and that) would be a little paycheck anyways,” Culp said. “But I don't know, it probably did better than it should have holding on as long as it did.”

Bobby Pierce of Oakwood, Ill., finished nearly three seconds behind Shirley in second while Babb, of Moweaqua, Ill., got the third spot. Billy Moyer Jr. of Batesville, Ark., was fourth and Unzicker, of El Paso, Ill., rounded out the top five finishers, all ahead of Culp.

Shirley, the 2012 series champion, rebounded from a sixth-place finish the previous night at Clarksville (Tenn.) Speedway, the only blemish during a week with top-five finishes otherwise.

“Last night I felt we had a good race car but it just wasn't our night,” Shirley said. “We had that flat tire early, got behind, and the Good Lord just let us (survive) for not giving up and keep digging and digging and keep just plugging along.

“Tonight, He rewarded us with. It don't happen all the time, but it's nice to win one like that and never want to have a guy blow a motor up. But for once, just luck was on our side.”

Two cautions slowed the feature, none for serious incidents. Richard Frost spun exiting turn two on the sixth lap while the first yellow appeared when the initial start was called back.

Polesitter Brian Shirley decisively slid up in front of outside front-row starter Brandon Sheppard in turn two on the first lap, taking command and pulling away for an easy victory. Sheppard ended up getting shuffled back to third behind Jack Sullivan before digging virtually into the infield in trying to regain second spot. He never could, settling for third behind Sullivan. Tanner English wasn't far back in fourth while fifth-finishing Richard Frost was nearly three-quarters of a lap behind the winning Shirley.

Timothy Culp jumped ahead of polesitter and fellow front-row starter Billy Moyer Jr. and cruised to victory in the second heat. Most drivers stuck with the low groove including Culp, who dropped down once he cleared Moyer on the super-slick surface. Moyer fell nearly a half-straightaway back by halfway and settled for second while series points leader Ryan Unzicker was nearly that far back again in third. Terry English was fourth closing followed by Jason Riggs and Wendell Wallace. Trace Westling was a distant last.

Outside front-row starter Shannon Babb hung tough in the high groove in a side-by-side duel with fast qualifier and polesitter Bobby Pierce in the first few laps, then edged away and held on for a 10-lap victory. Pierce tried to slide under Babb by dipping low in turn two on the fourth lap, but upset the car and slipped back. He made another charge over the final two laps, nearly pulling even heading for the white flag, but Babb held him off. The top two finished more than a straightaway ahead of the rest of the pack with Dennis Erb Jr. in third and Kevin Weaver a fadingfourth. Austin Rettig was the last car running in fifth.

Bobby Pierce of Oakwood, Ill., topped 21 entrants in qualifying at Clayhill Motorsports Park, tripping the clock at 15.865 seconds on a slick 3/8-mile surface.

Pierce will start on the pole in the first of three heat races. Other heat race polesitters: Billy Moyer Jr of Batesville, Ark., and Brian Shirley of Chatham, Ill. All heat finishers will transfer to the 40-lap main event.

Clayhill Motorsports Park hosts a rare Super Late Model event with the Summernationals completing the annual two-race swing through Tennessee. Shannon Babb of Moweaqua, Ill., won $5,000 Wednesday at Clarksville Speedway, which is about two hours away.

The 3/8-mile Clayhill oval, wide and lightly-banked, also posts a $5,000 winner’s purse with Brandon Sheppard of New Berlin, Ill., trying to win the tour’s visit to Atwood for the third straight season.

Ryan Unzicker of El Paso, Ill., comes into the race with a nine-point lead of Babb while Brian Shirley and Sheppard aren’t far off the pace. Fifth-place Bobby Pierce is working to recover from skipping an earlier tour race.

With 21 cars enter, three qualifying groups will set the lineups for three heat races. Every heat finisher will transfer to the main event with no consolation race scheduled.

Ominous clouds to the northwest appear to be breaking up a bit. ... Everyone unloaded in the late afternoon, but some had their cars poised to put back in the trailer if rain hit. ... Rodney Melvin and Riley Hickman are among expected drivers who skipped the event. ... Billy Moyer Jr. is back on the tour after bowing out last week following his runner-up finish at Tri-City Speedway. His father (and Tri-City winner) is expected to rejoin the tour Friday in Paducah, Ky.