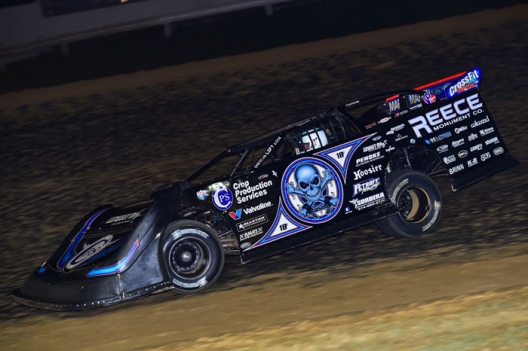 BROWNSTOWN, Ind. (Sept. 23) — Entering the Lucas Oil Series weekend doubleheader at Brownstown Speedway, Scott Bloomquist of Mooresburg, Tenn., separated himself as the only driver holding six career Jackson 100 victories. Leading flag-to-flag in Saturday’s 100-lap feature, the Hall of Famer added a seventh win to his resume, collecting a $15,000 payday in the 38th annual running of the event.

Starting on the pole, Bloomquist charged to the field at the drop of the green flag, leading the entire distance to outrun Jason Jameson of Lawrenceburg, Ind., for his second consecutive Jackson 100 victory.

“I never questioned anything,” Bloomquist said in victory lane. “I never even considered changing anything. There was a little more traction early than what I thought. We bottomed out a little bit in the early stages of the race. But it came right to us. The car was perfect. I could just keep turning, just throttle up in the center when a lot of guys would push out and just leave me that room to pass.

“Still, you don’t have eyes in the back of your head. You try to just to the best you can and hopefully there’s not another groove out there that somebody’s getting going and maybe coming up on you.”

As Bloomquist cruised over the field, it was the home-state father and son duo of Don and Hudson O’Neal battling in the early running, with the elder O’Neal charging past his son on an early restart to run in second on the fourth lap.

With Hudson O’Neal pulling back ahead of his dad on lap 15, it was Tanner English of Benton, Ky., working his way through the field, advancing from the 13th starting spot to run in fourth on lap 18. But as a yellow flag waved on lap 25, English’s charge was slowed, with the western Kentucky driver slipping back to run at the middle of the pack.

Maintaining his lead, Bloomquist approached the rear of the field on lap 38, stretching his lead over Hudson O’Neal at the halfway mark. Darrell Lanigan of Union, Ky., challenged O’Neal for the runner-up spot on lap 60, but the teenage driver held his advantage.

When the race’s final yellow flag waved on lap 73, it was fifth-running Jameson powering to the front of the field, overtaking Hudson O’Neal for the second-place spot. With the leaders working their way through lapped traffic, Jameson starting reeling in Bloomquist, but was never able to seriously challenge for the lead.

“It’s difficult enough passing lapped cars, if anyone would have been coming on, they would have had a heck of a time getting by us,” Bloomquist said. “I’m sure of that.”

"That was a hell of a race,” Jameson said. “There for a minute I was like, ‘I’m reeling him in.’ But he’s just so good on that bottom. Bouncing through them holes, my carburetor was kind of sputtering a little bit. But I think we might have had something.

“It seemed like after we had that yellow and we went back green my tires were really good. I could roll that center really well and then I just maintained. If we had another caution, that car was firing off pretty good.”

After a lackluster performance in Friday’s opener, O’Neal was happy with his podium finish. It marked the 17-year-old’s second-ever start in the Jackson 100.

“I didn’t know if I quite had a shot,” O’Neal said. “I thought I might have. I was running around there and I really wasn’t using my stuff up. I wasn’t running that hard. I didn’t know quite how hard (Bloomquist) was running. I thought there for a little bit if we could have got a caution like we did I could have had a better shot at him. But all in all, what a finish from the way it was last night.”

Notes: Bloomquist notched his 86th career Lucas Oil Series victory, his eighth of the 2017 season. … The race was slowed by four cautions. … The first yellow flag waved on lap three when Devin Gilpin brought his smoking No. 1G to a stop on the backstretch. … Dennis Erb Jr. slipped over the berm in turn one to draw a caution on lap 14. … A yellow flag flew on lap 25 when Boom Briggs slowed on the backstretch. … Chad Stapleton drew the final caution when he slid over the berm in turn four on lap 75.