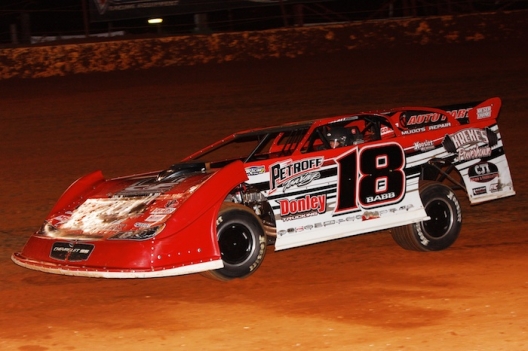 CLARKSVILLE, Tenn. (June 25) — Shannon Babb scored runner-up finishes in UMP DIRTcar Summernationals action at Clarksville Speedway two of the last three years, but his lone series victory at the quarter-mile oval — way back in 2006 — was beginning to seem like a long time ago.

The 40-year-old Moweaqua, Ill., driver, a three-time series champion, remedied that Wednesday by leading all 40 laps for a $5,000 payday. Babb went past polesitter Ryan Unzicker on the backstretch of the first lap and ran virtually unchallenged the rest of the way for his series-best 85th career victory.

“I always enjoyed racing at this track, but it’s been tough on me at times,” Babb said. “I started in the right spot tonight — the front row outside was the perfect place to start and, we were able to get it done, so I was tickled with that.”

Babb back into the top all-time spot amid a back-and-forth battle with Billy Moyer of Batesville, Ark., a six-time series champion. Babb and Moyer have two victories apiece on this year’s series, which stretches over 32 tracks for 39 days.

Unzicker, of El Paso, Ill., fell as much as a half-straightaway behind the low-running Babb and settled for his fourth runner-up finish in nine series races.

“Just too many seconds for me right now,” said Unzicker, the series points leader. “Points-racing, that’s fine, but damn it, I want to win, and I want the guys to feel good when we win. I just plain and simple want to win, especially on the Summernationals tour.”

Bobby Pierce of Oakwood, Ill., who took a provisional starting spot after struggling in a heat when he slowed to avoid the near-spin of fast qualifier Caleb Ashby, rallied from his 21st starting spot to round out the top five finishers.

Eighth-starting Brandon Sheppard and 16th-starting Brian Shirley both flirted with the top five while running the top groove, but misteps in the tricky line saw them drop back and out of contention.

At the beginning of the 40-lapper, Unzicker nosed ahead exiting turn two but Babb quickly took command.

“My car was really good. They supplied us with a good race car and a good setup,” the winner said. ?I had it to where I was able to move around on the racetrack if I needed to, because I figured if Ryan did get the jump, he was going to be on the bottom and I was going to have to get by him on the outside. I was stuck pretty hard — I think I could’ve went anywhere.”

Even amid traffic or on two restarts, Babb felt confident in his No. 18 Rocket Chassis.

Babb holds the all-time lead in Summernationals victories — for now — but he knows Moyer will do his best to tie it up again.

“He definitely knows where to come back to,” Babb said. “He’ll be over here at Atwood (Tenn.) and Paducah (Ky.), and Paducah’s a little honey-hole for him, so he’s going to be hard to beat.”

In the Clarksville feature the first of two cautions appeared on the 21st lap when Rodney Melvin and Wendell Wallace tangled on the low side between turns one and two. Jason Riggs got into the turn-four wall on the 25th lap, ending his race.

The tour continues its Tennessee two-step on Thursday with a stop at Clayhill Motorsports Park in Atwood, Tenn., for a $5,000-to-win event.

Notes: Fourteen of 22 starters were running at the finish. … John Minon Jr. did a 360-degreen spin inside turn one and two on the seventh lap, but he kept rolling to avoid a caution. … The racing program wrapped up about midnight after a lengthy intermission that included bringing the modified drivers onto the frontstretch and allowing fans from the stands to come through the gate under the flagstand for pictures and autographs. … Jeff Walston of Paducah, Ky., won the night’s UMP Crate Speedweeks feature. The minitour wraps up on Saturday at Clarksville with a $1,000-to-win event.

Brian Shirley overtook polesitter Austin Rettig with just a few laps remaining for a consolation victory. They both transferred to the main event along with Shirley's teammate Jason Riggs. Larry Barber Jr. was fourth after taking the spot late from Trace Westling, who rallied from his 10th starting spot but struggled with nosepiece damage in the final laps. Three cautions slowed the action. Chris Shelton got the worst of an early scramble to draw a caution, and Levi Ashby spun in turn one on a restart for another early yellow flag. Shelton got into the frontstretch wall late in the race, damaging the right side of his car and flattening his tires.

Taking the lead from Kevin Weaver on the third lap, polesitter Shannon Babb captured the final heat. Weaver got the edge on Babb early when a caution had Weaver scored first at the line, putting him up front for a single-file restart, but Babb worked underneath and pulled away. Weaver held on for second with Wendell Wallace third. Jack Sullivan was fourth and Richard Frost held off a charge from tail-starting Brian Shirley for the fifth and final transfer spot. Mitchell Lingauer spun in turn one on the second lap to draw the race's first yellow flag, then spun again going to the green on a restart.

Taking command when polesitter Caleb Ashby got severely sideways in turns one and two at the outset, Ryan Unzicker cruised to a victory in the 10-lap second heat. Ashby was back to fifth before he got things sorted out in the caution-free affair, and third-starting Bobby Pierce was a victim. Terry English duplicated his son's first heat finish in second while pulling far ahead of third-place Brandon Sheppard. Justin Rattliff and Ashby got the final two transfer spots.

Polesitter Dennis Erb Jr. ran away for an easy victory in the first prelim. Fourth-starting Tanner English took second from outside front-row starter Rodney Melvin on the restart while Melvin, Timothy Culp and — further back —  John Minon Jr. — transferred to the main along with Erb. Melvin got way too high in turn two on the first lap, but recovered and later lost the spot toe English. Austin Rettig spun on the third lap for the race's first caution. Another yellow flew when Levi Ashby spun inside turn four on the eight lap.

He’ll start on the pole of the second of three heat races after group qualifying. The other heat race polesitters: Dennis Erb Jr. of Carpentersville, Ill., and Shannon Babb of Moweaqua, Ill., both former series winners at Clarksville and multitime series champions.

Series points leader Ryan Unzicker of El Paso, Ill., starts outside the front row in hish eat race. Brian Shirley of Chatham, Ill., fourth in the series points chase, spun on his first time trial lap and then pulled to the infield without taking time because of a flat right-rear tire. He'll start on the tail of a heat race.

Clarksville Speedway is set to host the first race of the tour’s Tennessee swing with a $5,000-to-win purse on the line at the quarter-mile oval. Twenty-nine drivers are entered.

Ryan Unzicker of El Paso, Ill., comes in leading the points over Babb, Sheppard and Brian Shirley while Bobby Pierce must recover from skipping the tour’s Sunday trip to I-96 Speedway in Lake Odessa, Mich.

Group qualifying will start the night with the field split into three groups that will set lineups for three heat races transferring five drivers apiece to the main event. A single consolation will transfer three more drivers and three provisional starters will round out the 21-car field.

Five drivers have entered all eight events while 11 have competed in six or more. … With its southernmost swing, the tour has picked up a few series newcomers including Jack Sullivan, Wendell Wallace and Louisiana's Timothy Culp. … Three Tennessee drivers own Summernationals victories: Scott Bloomquist, Mike Marlar and Jimmy Owens. Bloomquist is the most recent after dropping in last season for a victory at Florence Speedway in Union, Ky. ... A day off on the Summernationals usually means a long day of maintenance, and Jason Riggs put a new body on his No. 81jr with crew chief Randall Edwards, staying up until 3 a.m. "Ours was pretty ragged; we had to," Riggs said. "We weren't really aerodynamic." ... Riggs Motorsports teammate Brian Shirley did an engine swap in his primary car. ... Gary Christian, who had a second-place MARS finish in his lone start at Clarksville, is back on the tour in the C.J. Rayburn house car. He's run the car primarily with a swingarm rear suspension but has a four-bar setup on at Clarksville. "It's one of the best steering cars I've ever driven," the Oklahoma driver said. ... Tyler Clem, son of Bubba Raceway Park co-owner and shock jock Bubba Clem of Tampa, Fla., is entered in the UMP Crate Speedweeks action. ... Former NASCAR driver Ken Schrader is competing with the modifieds. ... Hot laps were scheduled for 6:30 p.m., but cars didn't hit the track until 7 on a relatively comfortable evening with temperatures in the mid-80s. ... Ever the jokester, promoter William Scogin had a quip when UMP officials asked him where the hot-pit would be. "Ain't it all hot out here," he said, pointing around the pit area. ... Reigning Southern All Star champ and current points leader Riley Hickman of Ooltewah, Tenn., was a late arrival and 30th entrant. He won at Clarksville in March on the MARS circuit.