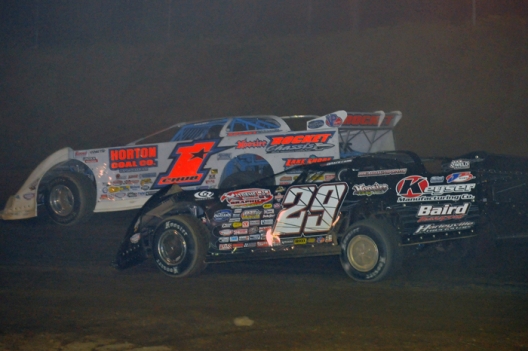 The 43-year-old star from Union, Ky., patiently chased race-long pacesetter Chub Frank of Bear Lake, Pa., until pouncing on the veteran in lapped traffic to assume command on lap 25 and march off to his fifth victory of the season on the national tour.

“I just had to wait to get to (lapped) traffic there,” said Lanigan, who earned $8,650 for his second triumph in three career starts at Big Diamond. “Chub was pretty good, but our car was pretty good and it was getting better toward the end of the race. Then he kind of chose the wrong line when he got to traffic and we got by him.”

Lanigan controlled the final 16 circuits of the event, turning back a brief challenge from Rick Eckert of York, Pa., to register his series-best 58th career win. The two-time WoO champion crossed the finish line 1.493 seconds ahead of the 48-year-old Eckert, who fell short of nabbing his first WoO victory since taking over driving duties of the Rocket Chassis house car in late April.

Frank, 51, settled for a third-place finish after blasting off the outside pole to lead the race’s first 24 laps. He saw his WoO winless streak reach 182 features since his last victory on Aug. 22, 2009, at Atomic Speedway (then K-C Raceway) in Alma, Ohio.

Dan Stone of Thompson, Pa., placed fourth after climbing forward from the 10th starting spot while Eric Wells of Hazard, Ky., who started from the pole, was fifth for his second top-five outing of the 2014 WoO campaign.

Lanigan enjoyed a flawless evening at the 3/8-mile oval in Pennsylvania’s coal region, which hosted the WoO circuit for the first time in five years. He set fast time, won a heat race and captured the 40-lap feature to remain the only repeat WoO winner this season.

“We’ve got an A-plus season going right now,” said Lanigan, who has 13 top-10 finishes in 14 WoO LMS starts this season. “The piece (Club 29 Race Car) we built and designed has been unbelievable since we brought it out of the box in February, so I couldn’t ask for nothing better.”

Lanigan, who won the inaugural WoO LMS event at Big Diamond in 2008, drove out of the third starting spot to pass Wells for second on a lap-11 restart. He then measured Frank until making his move shortly after the race’s halfway mark.

“I knew that once we got to that lapped traffic (Frank) had to do some choosing,” said Lanigan, who extended his WoO points lead to a commanding 132 points over Eckert. “He chose the wrong spot there and we got by him.

“That was definitely the key to the race,” he added. “Once we got the lead the bottom was so dominant.”

Eckert saw first-hand just how superior the inside lane became as the feature progressed. The home-state standout tried to challenge Lanigan riding the high side of the track but couldn’t make it stick.

“The bottom started picking up by the time I got to Darrell,” said Eckert, who started sevent. “It started to rubber a little bit, and I just couldn’t keep running up there anymore. That end (turns three and four) got so dirty too that I’d just float the whole car on exit.

“We had a great car, and I found something up top to get up to second. We just couldn’t get all the way to the front though.”

Frank also fell short, though he did register his second consecutive podium finish on the WoO circuit. He finished second in the Jackpot 100 on May 25 at Tyler County Speedway in Middlebourne, W.Va.

“I really didn’t feel that good, but nobody was catching us for the first half of the race,” Frank said. “I think when I got in behind somebody (in traffic) it was dirty (air), and I didn’t feel right and Darrell got by us.

“I could see where we could adjust the car, so at least we held on to get a good finish.”

Frank lost second place to Eckert on a lap-26 restart when he picked the inside lane and watch Eckert sail by on the top.

“I wasn’t sure which way to go,” Frank said of his restart lane choice. “I know I got (Wells) on the outside on the start, but I just didn’t know how good (Eckert) was. It’s just a guess sometimes, and we just guessed wrong on that deal.”

“Things are definitely a lot better right now,” Frank said. “We’ve come up with some different stuff that’s working for us, but you still gotta hit it right all night long and tonight we hit it right for most of the night. We got a little bit to go.”

The race’s three caution flags were caused by a lap-11 spin in turn four by Ben Whitaker of Scott, Pa., who got turned around as Frank was lapping him; Boom Briggs of Bear Lake, Pa., who slowed on lap 26; and WoO rookie Chase Junghans of Manhattan, Kan., who slowed with a flat tire on lap 36.

Notes: Lanigan hasn’t finished outside the top 10 in a single WoO A-Main this season. … Eric Wells mentioned that he was using Penske Racing Shocks on his Rocket by BruceBilt car. The Penske Shocks headquarters is located in Reading, Pa., just an hour south of Big Diamond. ... Andy Haus of Easton, Pa., was scheduled to start 22nd after qualifying through the B-Main but he never made a lap in the feature. His car suffered rearend problems during the pace laps and was towed off. … Luke Hoffner of Turbotville, Pa., gained the 23rd starting spot in the feature thanks to a provisional but had to borrow the car of Walnutport, Pa.’s Steve Nederoster to start the feature due to terminal mechanical trouble with his own mount.