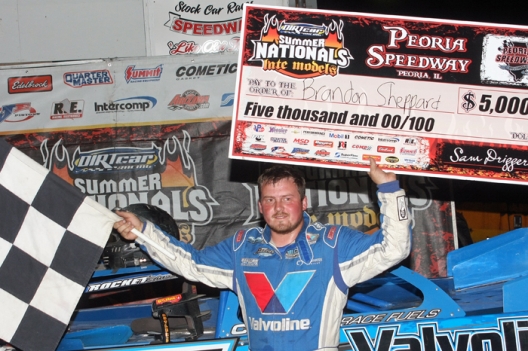 Taking advantage of an outside pole starting spot, the defending UMP DIRTcar Summernationals champion from New Berlin, Ill., outgunned front-row mate Brian Shirley of Chatham, Ill., for the lead at the initial green flag and romped to victory in the 40-lap Hell Tour feature.

Sheppard, 21, earned $5,000 for his first triumph of the 2014 Summernationals. He entered the eighth round of the grueling five-and-a-half-week-long series ranked fourth in the points standings after getting off to a slow start.

“We’ve been running a lot better then past four or five nights,” said Sheppard, who recorded his eighth career Summernationals triumph. “We’ve really hit on something on the car, and everything’s been starting to click. We just hadn’t been able to hit on a full night yet and finally we did tonight.”

Sheppard was perfect, setting the overall fastest time in qualifying, winning a heat race leading the A-Main from flag-to-flag. He became the second straight driver to sweep a Summernationals program in as many nights, joining Shirley, who authored an identical performance on Sunday at I-96 Speedway in Lake Odessa, Mich.

Bobby Pierce of Oakwood, Ill., passed Shirley for second place on lap 32 but never drew close enough to challenge Sheppard, finishing 0.670 of a second behind the victor. It was the second runner-up outing of the ’14 Hell Tour for the 17-year-old Pierce, who made a strong return to the circuit after skipping Sunday night’s event at I-96 so his team could regroup.

Shirley, 33, settled for third place one night after claiming his first Summernationals triumph of ’14 at I-96. The race’s polesitter also fell short in his bid to capture Peoria’s Hell Tour A-Main for a third consecutive year.

Ryan Unzicker of El Paso, Ill., continued his steady Summernationals showings by advancing from the eighth starting spot to finish fourth and remain atop the circuit’s points standings, while sixth-starter Shannon Babb of Moweaqua, Ill., wrestled fifth place from Kevin Weaver of Gibson City, Ill., during the race’s second half and finished there.

For Sheppard, the key to victory was the feature’s original start. He used the outside line to surge ahead of Shirley rounding turns one and two and was never seriously threatened over the remaining distance.

“The way the track is here, the banking on the middle-top just makes for a better start for the outside guy,” said Sheppard, who drove his family-owned Rocket car with a Mullins engine under the hood. “There really wasn’t any moisture to start in, so it was really whoever got the jump there. I don’t know if I got a little bit of a jump or not — I couldn’t really see where (Shirley) was at — but once I rolled down into the middle there my car was really good, so I just rolled in there, stuck it and drove off.”

In a race slowed by caution flags on laps 20, 21 and 38, Sheppard had little trouble opening a cushion on Shirley and, after the final restart, Pierce. He credited his 18-year-old crewman, Blake Kemp-Irvin, for helping him pick the right line around the quarter-mile oval to keep his pursuers at bay.

“My crew guy did a really good job tonight telling me where to go (on the track),” said Sheppard, who scored his first-ever victory at Peoria. “He just graduated high school he’s and young, and we’ve been having some confidence issues with him not being able to decide where he wants me to be at (on the track). So the other day I just told him, ‘Man, If you see someone coming somewhere and you think my car’s good enough to be there, put me there. I trust you.’ He did an awesome job (giving signals) tonight.”

Having an impeccably-handling machine also helped Sheppard’s cause.

“My car was really maneuverable,” Sheppard said. “I could go wherever I wanted to in lapped traffic — top, bottom, middle — so I couldn’t be happier. Hopefully we can keep this going.”

Pierce, who started third and spent most of the distance chasing Shirley before finally pulling off a late-race pass to grab second place, thought he might have a shot at Sheppard if the feature stayed under green-flag conditions to the finish. But the caution winked on for the final time on lap 38 — for a turn-four spin by the lapped Jason Riggs of Harrisburg, Ill., who twirled due to contact from Pierce — and Pierce’s hopes were effectively snuffed out.

“I know Brandon was fast the whole race,” Pierce said. “I think with my tires, they were trying to come in and his were possibly starting to go away there towards the end. I was hoping there wasn’t a caution there, but I got into Riggs. I didn’t really mean to spin him out, but he kind of stuck his right-rear into me and I was trying to get around him so it was just a racing deal.

“Because of my tires and everything, I didn’t want a caution at all. With those lapped cars, it’s kind of better to be in second place sometimes. But I was just a little bit too far behind Brandon to do anything with him. I saw five-to-go and Brandon was like a half-straightaway ahead of me, and I didn’t think I’d get him.”

“I think if we would’ve had that other car we would’ve had a little something for (Sheppard),” said Shirley, speaking of a machine that was sidelined by engine problems during hot laps on Sunday at I-96 and wasn’t ready for action at Peoria. “The 40-tire (Hoosier hard-compound) car (which he ran at Peoria) just doesn’t have what it needs for a track like this. We did alright, and this car is getting better, but we just still need to be a little better.”

Shirley noted that Sheppard simply got the best start when the race’s initial green flag flew.

“I tried my best, but Sheppard just did a better job of setting the pace,” Shirley said. “He picked the pace, and I kind of went with it instead of setting it myself and making him work a little harder. He was in a better spot, and hopefully down the road he’ll remember that when I’m out there in that spot.

The race’s first caution flag flew on lap 20 when Scott Schmitt of Tonica, Ill., stopped on the inside of the backstretch. One circuit later the caution flew again when Ray Guss Jr. of Milan, Ill., went spinning out of seventh place in turn four.

The UMP DIRTcar Summernationals will be idle on Tues., June 24, before returning to action on Wed., June 25, with a $5,000-to-win event at Clarksville (Tenn.) Speedway.

Bo Brockway held off a furious challenge from Jason Feger, beating the former Summernationals champion for the victory by 0.085 of a second. Evan Fink finished third, falling one spot short of a transfer position.

Peoria’s track crew went out to recondition the speedway’s surface following the completion of all heat-race action; at 8:20 p.m. CT the work was complete and the Late Model B-Main was lining up. Originally officials planned to come right back with the Late Model feature after the B-Main, but the schedule has been changed for the UMP Modified A-Main to run first. … Brian Shirley will start from the pole following the redraw among heat winners. That could be bad news for the field — he’s not only coming off his first Summernationals victory Sunday night at I-96 Speedway, and Peoria is one of his best racetracks (two straight Summernationals wins, a $3,000 victory earlier this year). ... Provisional starting spots in the feature went to Jason Riggs and Mike Spatola (Summernationals), Scott Schmitt (UMP national points) and Todd Bennett (track).

With rain once again threatening a Summernationals event, series and track officials put the heats on the track just before 7 p.m. CT and completed the four 10-lappers by 7:20 p.m. … Brandon Sheppard was victorious in the first heat, beating Kevin Weaver by 2.575 seconds. Jim Moon and Donny Walden claimed the other two transfer spots. … The closest preliminary was the second heat, which saw Ray Guss Jr. nip Shannon Babb for the victory by a mere 0.084 of a second. Justin Reed and Bob Gardner also transferred. … Bobby Pierce ran away with the third heat, beating Jason Jaggers by a commanding margin of 2.749 seconds. McKay Wenger and Ryan Little also made the feature cut. … Brian Shirley pulled away from Summernationals points leader Ryan Unzicker to win the fourth heat by 0.951 of a second. Billy Drake and Russ Adams finished third and fourth, respectively. … Summernationals regular Jason Riggs fell short of qualifying in the second heat, returning to the pit area with damage to the left side of his car. … Jason Feger, a former Summernationals winner at Peoria, missed transferring by one spot in the third heat.

Brandon Sheppard was quickest overall in the split time trials, turning a lap of 13.491 seconds in Group 1. He earned the pole starting spot in Heat 1.

Bobby Pierce was fastest in Group 2 with a lap of 13.754 seconds, giving him the pole in the third heat.

Other heat polesitters are Ryan Guss Jr. and Ryan Unzicker.

Heavy overnight rain — as much as two inches by some reports — left the pools of muddy water in the Peoria Speedway pit area and flooded the track’s infield, but pop-up showers have missed the track this afternoon so racing is set to run off on schedule. … A field of 33 cars is signed in for the night’s action. Interestingly, the entry list is almost exclusively comprised of Illinois drivers — just one out-of-stater, Jim Moon of New Florence, Mo., is on hand. … Bobby Pierce of Oakwood, Ill., is back in action after skipping Sunday night’s Summernationals event at I-96 Speedway in Lake Odessa, Mich., to regroup from a frustrating, struggle-filled start to the 2014 Hell Tour. … A late arrival to the speedway was Mike Spatola of Manhattan, Ill., who pulled up to the pit gate at 6:15 p.m. He missed hot laps but called ahead to have his qualifying number drawn; he didn't get a time-trial lap, however. ... Ryan Unzicker of El Paso, Ill., carries the Summernationals points lead into Peoria, topping Shannon Babb of Moweaqua, Ill., by nine points (449-440). I-96 winner Brian Shirley of Chatham, Ill., sits third in the standings (-41) with Brandon Sheppard of New Berlin, Ill., fourth (-44).

The UMP DIRTcar Summernationals pays a Monday-night visit to Peoria (Ill.) Speedway, a quarter-mile oval that has become a staple of the Hell Tour during the 2000s. A 40-lap, $5,000-to-win feature tops the evening’s agenda.

With the Summernationals racing annually at Peoria since 2000, tonight’s action marks the circuit’s 14th event alltime at the central Illinois track. Only two drivers have won more than one Summernationals feature at Peoria: Brian Shirley of Chatham, Ill., and Shannon Babb of Moweaqua, Ill., both three-time victors.

Monday’s program, which includes UMP Modifieds and 4-Cylinders, is scheduled to kick off with hot laps at 6 p.m. CT.

With 32 cars signed in for action, time trials will be split into two groups. Drivers in Group 1 will compete for starting spots in heats 1-2 and those in Group 2 will race for positions in heats 3-4.