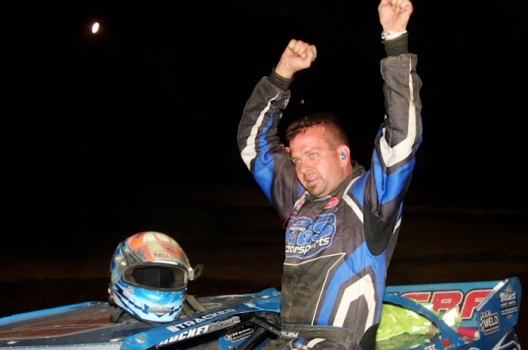 Forced to run his backup Riggs Motorsports car after the machine he planned to drive was sidelined by engine problems in hot laps, Shirley proceeded to sweep Sunday’s UMP DIRTcar Summernationals program at I-96 Speedway. He set fast time, won a heat race and led the caution-free 40-lap feature from flag-to-flag, turning back relentless late-race pressure from Shannon Babb of Moweaqua, Ill., to secure the $5,000 top prize.

Shirley, 33, recorded his first victory of the 2014 Summernationals, which completed its seventh of 33 scheduled events. It was the 13th career win on the grueling Hell Tour for its 2012 champion.

“This hasn’t been our favorite car,” Shirley said of the Rocket Chassis mount he steered to the win. “We’ve been good in our other car the last two nights (at Tri-City Speedway in Granite City, Ill., and Fairbury, Ill.) and unloaded with it here and we were really fast in hot laps there before she went south on us, so we had to unload this thing. It wasn’t even really ready, but we got it ready to qualify and then set fast time and won our heat.

“I was a little nervous because it’s not been good to us in features in this condition (surfaces requiring hard-compound tires), but thank God it come through tonight. When I made a couple hot laps (to run in the watered track before the start of the feature), it calmed my nerves down because I felt like I could feel the grip. It just took off from there.”

The 40-year-old Babb — a winner in four of the five previous Summernationals A-Mains contested at I-96, including each of the last three years — made a gallant bid to continue his stranglehold on victory lane in the first Hell Tour event run on the facility’s new 3/8-mile layout. He needed just eight laps to advance from the fifth starting spot to second place and by the race’s halfway mark was on Shirley’s rear bumper, but his repeated attempts to overtake the leader while racing through heavy lapped traffic fell short and he settled for runner-up money.

Ryan Unzicker of El Paso, Ill., finished a distant third, taking the checkered flag a full straightaway behind Shirley and Babb after starting from the same spot. He took over the Summernationals points lead with his fifth top-three finish in seven events.

Shirley started from the pole position and built an edge of over two seconds at points during the race’s first half, but he found himself in a dogfight with Babb for the final 20 circuits. With the inside groove becoming dominant and Babb all over him, Shirley had to negotiate heavy thickets of lapped traffic without missing a beat.

“We didn’t know who was behind us, but I knew somebody was there,” Shirley said. “The track started to get some rubber (on the bottom), so lapped traffic was tough. I didn’t want to give it up again like we did when we were leading here a couple years ago on the (old) quarter-mile (oval), so I just tried to work lapped traffic the best I could.”

Shirley kept Babb at bay, repelling the three-time Summernationals champion’s last-ditch outside bids off turn four the final two laps to cement a rather unlikely victory.

“We’re definitely gonna work towards getting our other car fixed first,” Shirley said. “We’ll try and massage on this one a little bit — it did get the w in a situation where I didn’t think it would happen, but we’ve struggled a lot with it this year. To say we’re gonna keep it the number one car, we’re not gonna do that, but it’s good to know it can definitely hang on to get a win.”

Babb did all he could to claim his second triumph of the 2014 Hell Tour but couldn’t overcome Shirley.

“We was on him pretty good, but it kind of got one-lane and took rubber,” said Babb, who also drove a Rocket Chassis machine. “I might have had an opportunity in lapped traffic, but it was one of them deals — I’ve tried it before (a go-for-broke bid for the lead) and maybe went out of the place, so I just kind of sat there behind him in the rubber. It’s all you can do at that point.

“I sat there and watched him and the lapped traffic was pretty tough. Mistakes are easy to make in a situation like that, so I just waited for the door to open. But he did a good job and never did open the door for me and we just stayed behind him.”

The UMP DIRTcar Summernationals continues with Round 8 scheduled for Mon., June 23, at Peoria (Ill.) Speedway.

Brian Shirley has recovered well from engine problems during hot laps that sidelined the Riggs Motorsports car he planned to run tonight; with his second machine, he’s set fast time, won a heat and drew the pole position for the 40-lap feature. But he’s not going to be satisfied unless he can complete his evening with a $5,000 victory — and that’s not going to be easy. The car Shirley is driving has not performed to his liking this year with hard-compound tires bolted on and that type of rubber might be what’s needed for the headliner. “It’s got me nerved up,” Shirley said of his tire choice for the feature. … Jon Henry’s rollover during the second heat marked the first time in his 12-year racing career that he’s gotten upside down. He wasn’t a big fan of the experience. “I was thinking like Ricky Bobby,” said Henry, referencing Will Farrell’s lead character in the Talladega Nights movie. “I was like, ‘I’m flipping over, and I’m on my roof.’” Henry said he wasn’t injured and his car sustained mostly sheet-metal damage, but he was nervous because he couldn’t immediately climb out of the cockpit because the car landed upside down in thick mud. … Provisional starters for the feature are Jim Moon and Bob Mayer (Summernationals), Jason Playter Jr. (UMP national points) and Bry Sloan (track). ... At 9:30 p.m. ET, the track crew was on the speedway putting down some water. Track officials decided to send the 25-lap B-Modified feature out first and as the 10 o'clock hour approached it was still running — and there is some lightning and dark clouds from pop-up storms dancing around the area. ... The Late Model feature rolled onto the speedway at 10:05 p.m. ET.

Steve Kester led from flag-to-flag to win the 10-lap last-chance event, giving him the 16th starting spot in the feature. Brian Ruhlman threatened Kester but settled for second and Jason Jaggers claimed the third and final transfer spot. Caution flags flew on the opening for Bry Sloan’s turn-two spin and on lap three when Blaine Hendrick slid off the backstretch.

Ryan Vanderveen, coming off a feature win Saturday night at Crystal (Mich.) Motor Speedway, turned back a late threat from Brandon Thirlby to emerge victorious. Jason Riggs was a close third-place finisher, with Dona Marcoullier and Herb Reich farther back in fourth and fifth, respectively.

Ryan Unzicker led the entire distance, crossing the finish line 1.423 seconds ahead of Shannon Babb, who slipped by Curtis Roberts with an inside move off turn four on the last lap. Curt Spalding was fourth and Phil Ausra placed fifth. The race was slowed by a caution flag on lap eight when Jim Moon spun in turn two and later needed wrecker service and a red flag was put out on the ensuing restart for Jon Henry, who flipped once after sliding over berm between turns three and four. Henry, who wasn’t injured, attempted to slide underneath Phil Ausra for the fifth and final transfer spot but went over the outside bank and barrel-rolled.

Brian Shirley led from start-to-finish to take the victory, but Brandon Sheppard closed in over the final three laps and looked to the bottom of Shirley off turn four heading to the checkered flag before settling for second place. Jeep VanWormer finished a half-straightaway behind in third place, but he was challenging Shirley and Sheppard on lap eight when he slid over the turn-four outside berm and lost significant ground before getting rolling again. Eric Spangler finished fourth and Brad Harden slipped by Steve Kester late in the distance to take the fifth and final transfer spot.

Bobby Pierce of Oakwood, Ill. — the 17-year-old sensation who entered the 2014 Summernationals as the championship favorite — is not in attendance. After Saturday night’s rainout at Fairbury, Ill., he announced in posts to his Twitter feed and Facebook page that his team was “going home to regroup” and will try to make it back onto the Hell Tour for Monday night’s event at Peoria (Ill.) Speedway. … With the struggling Pierce bypassing the nearly five-hour overnight haul to Michigan and Rick Eckert of York, Pa., Gregg Satterlee of Indiana, Pa., Billy Moyer Jr. of Batesville, Ark., and Scott Schmitt of Tonica, Ill., dropping off the circuit as planned, just five drivers on hand at I-96 maintain perfect attendance through seven Summernationals events. The group: Ryan Unzicker of El Paso, Ill., Shannon Babb of Moweaqua, Ill., Brandon Sheppard of New Berlin, Ill., Brian Shirley of Chatham, Ill., and Jason Riggs of Harrisburg, Ill. … Rusty Schlenk, a native of Jackson, Mich., now living in McClure, Ohio, is absent from tonight’s action despite winning three times in as many starts this season at I-96. … UMP DIRTcar director Sam Driggers said he’s given Fairbury American Legion Speedway officials several date options to reschedule Saturday night’s rained-out Hell Tour feature. “They’re going to meet with the fairboard and decide what they want to do,” said Driggers, who hopes to announce a new Fairbury date by Tuesday.

Brian Shirley of Chatham, Ill., turned the overall quickest lap in the group time-trial session, lapping the 3/8-mile oval in 17.386 seconds to earn the pole position in the first heat.

Shirley's fast circuit came behind the wheel of his backup Riggs Motorsports car after he encountered problems with his primary machine during hot laps. Terminal motor woes forced the team to hastily pull out their second car for qualifying.

After rain stopped Saturday night’s UMP DIRTcar Summernationals event at Fairbury (Ill.) American Legion Speedway with only the B-Main and 50-lap feature left on the schedule, Round 7 of the Hell Tour comes to Mike Mouch’s I-96 Speedway near Grand Rapids, Mich.

Sunday’s 40-lap, $5,000-to-win feature marks the sixth Summernationals visit to I-96, which has hosted the circuit annually since 2010. This will be the first time, however, that the series action has been contested on the new 3/8-mile layout that Mouch debuted this season. Previous Hell Tour races were run on I-96’s former half-mile and inner quarter-mile ovals.

Shannon Babb of Moweaqua, Ill., has been the scourge of Summernationals competition at I-96, winning four of the previous five events, including the tour Hell Tour’s visit in each of the last three years. Jeep VanWormer of Pinconning, Mich., is the only other Summernationals winner at I-96, capturing the 2010 event.

UMP Modifieds and Street Stocks are also on the evening’s program.