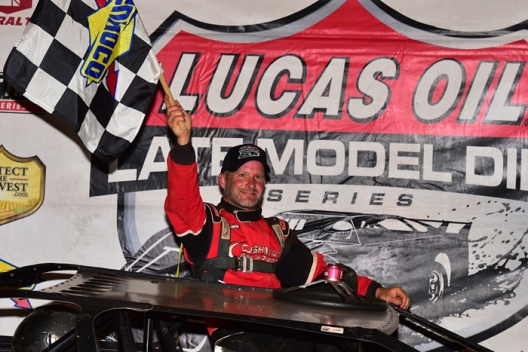 Roberts, driving a 2-race-old Longhorn Chassis, turned back a wall-scraping charge from fellow Longhorn driver Jonathan Davenport of Blairsville, Ga., to wrap up the victory at the 4/10-mile oval in east Tennessee.

"We had a second-place car tonight," said Roberts, whose first Lucas Oil Series victory came five years earlier in Swainsboro, Ga. “This Longhorn Chassis has been spectacular all weekend. We had a fourth place last night at Cherokee in our first race in the car and to come here tonight and win.

“I don't know what to say except thanks to Kevin Rumley, (Bobby) Labonte (Racing), and everyone at Longhorn Chassis. I really like how this car feels. It’s fast and fits my driving style exceptionally well.”

Davenport dove under Roberts in turn four on the final lap, briefly sliding alongside before settling for second while Bloomquist stormed from the rear of the lead lap to finish third after hit pit stop to change a left-rear tire.

The 11th-starting Davenport, who took second from O’Neal with seven laps to go and did his best to chase down Roberts, couldn’t quite catch the leader at the finish.

“Our car was really quick, but it took us a few laps to get going after those cautions,” the runner-up said. “When I got around O'Neal I thought I had enough time to catch him. I was watching the scoreboard and the flagman and when he gave the two-to-go signal I thought, let's put this thing up against the wall and go for it. I dived into turn three and thought I could clear him, but I just couldn't quite get it done. That was a heck of a finish no doubt.”

Bloomquist, meanwhile, was denied his third series victory of the season after dominating most of the race.

“I don’t know what happened, whether we ran over something or what,” he said. "The car was just super all night; it was the weekend we were really looking forward to.

“We had the hole in the radiator last night, and then tonight the same thing happened in the heat race. We replaced the radiator before the feature. We wanted to win really badly tonight for our sponsor Ole Smoky Moonshine, but it just wasn’t meant to be.”

Bloomquist and Pearson led the field to green for the 50-lapper with Bloomquist in front of Pearson and Eddie Carrier Jr. on the first lap.

Pearson slowed for a lap-three yellow as the first retiree and Bloomquist went back to work under green, building a comfortable lead while Roberts held onto the second spot through the first half of the race. Behind him, O’Neal, Carrier and Davenport battled in the top five, frequently swapping positions.

While the field was slowed under caution, Bloomquist headed to the pits, handing the lead to Roberts. But Bloomquist wasn’t done as he was knocking on the door to the top five when a lap-38 yellow flew for a spin by Jason Hughes.

Bloomquist continued his climb to third while the second-running Davenport cut into the lead of Roberts late in the race, but neither had time to overtake Roberts.

Notes: Jimmy Owens was towed off the track on lap 34. His 14th-place finish snapped a 10-race streak of top-five finishes. ... Mark Vineyard of Powell, Tenn., unloaded a new Rocket by Brucebilt but failed to make the feature lineup. ... The series is made its first visit to the historic 4/10-mile oval in front of a standing-room-only crowd. ... Afternoon showers struck the track, but the program went on as scheduled. ... Hometown driver Jason Welshan won $1,500 in the Crate Late Model feature. … Smoky Mountain returns to action July 11 with the Food City-sponsored Firecracker, a $5,000-to-win race on the Ultimate Super Late Model Series.