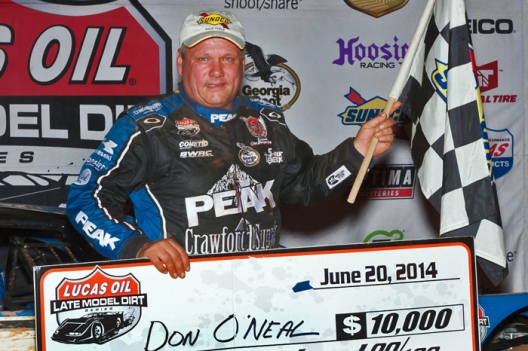 The 49-year-old O’Neal started on the pole, slipped back to third early, then wrestled the lead from upstart Brandon Overton of Appling, Ga., on the 36th of 50 laps for a $10,000 victory in Cherokee Speedway's 16th annual Grassy Smith Memorial. O’Neal earned his fourth series victory of the season.

"What a night! To win for Barry and Lance Wright is great!” said O’Neal, who was joined by the family of the chassis builders in victory lane. “The race shop is just down the road, so I know its special for them to be in victory lane tonight. We had a terrific night.”

The 23-year-old Overton finished second for his best series finish while Jonathan Davenport of Blairsville, Ga., who held the second spot most of the race, settled for third at the historic 4/10-mile Upstate oval. Casey Roberts of Toccoa, Ga., gave the Peach State three of the top five finishers while Jimmy Owens of Newport, Tenn., O’Neal’s closest pursuer in the series points, was fifth.

"I kind of stumbled there in turn two on about the third lap and let those guys by me. But we fought back,” said O’Neal, three times a runner-up on the Lucas Oil Series and looking for his first championship. “I went by Davenport and then followed (Overton) for what seemed like forever. Traffic kind of held him up a little. I knew I had a car capable of getting back around him. I was patient with him. He drove a very good race. Once we caught up to him we were able to work the car better off of turn four and that's when we retook the lead.”

O’Neal led the first two laps while fellow front-row starter Scott Bloomquist immediately ran into trouble, slipping up in turn two on the first lap and then retiring shortly thereafter after rock apparently punctured his radiator.

Overtook took the lead on the third lap with Davenport dropping O’Neal to third, and that’s the way they ran for nearly 30 laps before O’Neal went around Davenport on the frontstretch and took up chase of the young Overton.

O’Neal grabbed the lead from Overton, who took the seat in the Troy Baird-owned Club 29 Race Car earlier in the spring. Overton was pleased with his runner-up finish.

"To run second with these guys, wow, I don't know what to say,” Overton said. “I thought for a moment, 'Hey I am leading this race, I might just win it.' When (O’Neal) got back around me, I knew I was in trouble. That caution with eight laps to go gave us some hope, but once we went green he was gone.

“I have to thank Ronnie Stuckey and Darrell Lanigan for their help on the car. We are very pleased with it. We look forward to running several more Lucas Oil races the rest of the season.”

O’Neal, in his first season as a teammate to Steve Francis with Clint Bowyer Racing, was pleased to grab a victory at Barry Wright’s home track.

“I have to thank Clint Bowyer for giving me this opportunity. Thanks to all of my sponsors, Peak, Crawford Supply, Traeger Grills, Ohlins, Toyota, Georgia Boot, Clements Race Engines, and of course Barry Wright Race Cars,” O’Neal said. “Good to have Casey Bowyer here tonight to see us win. My crew chief Jeremy Justice was giving me hand signals, and telling me where to run, I just can't thank him enough.

“He may be young, but he knows what he is doing. It takes a total team effort to win this championship, and we have all the pieces in place.”

Notes: Casey Roberts of Toccoa, Ga., finished fourth while debuting a brand-new Longhorn Chassis. ... Jimmy Owens of Newport, Tenn., notched his 10th straight top-five finish. ... Last year's race winner Chris Madden of Gray Court, S.C., finished a quiet eighth; in a notice on his website, Madden said he’s been experience health difficulties which have required multiple doctor visits, and he’s scheduled to undergo a surgical procedure on June 25. … The race was slowed by a single caution on the 42nd lap when Ross Bailes of Clover, S.C., suffered a flat tire. ... Earl Pearson Jr. of Jacksonville, Fla., experienced mechanical gremlins in the first heat and was forced to use a provisional. .... Jason Papich of Nipomo, Calif., made contact with the wall and nearly went over the wall during the consolation race. ... The tour made its eighth appearance at the high-banked, 3/8-mile oval. ... Michael Brown of Pageland, S.C., collected $1,500 in the SECA Crate Late Model feature.