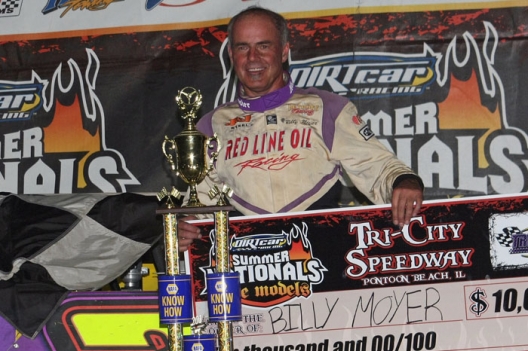 The Dirt Late Model Hall of Famer from Batesville, Ark., found the developing lane of rubber on the inside of the 3/8-mile oval before Tim Manville of Troy, Ill., and used it to overtake the upset-minded youngster for the lead on lap 30.

Moyer, 56, dominated the remainder of the caution-free distance to capture his unprecedented fifth career Hell Tour event at the Kevin and Tammy Gundaker-promoted track outside St. Louis. He earned $10,000 for his second triumph of the 2014 Summernationals, which pulled him back into a tie with Shannon Babb of Moweaqua, Ill., atop the circuit’s alltime win list with 84 victories.

The winner’s 26-year-old son, Billy Moyer Jr., passed Manville for second on lap 35 and finished there. He never drew even within striking distance of his father, crossing the finish line 5.392 seconds — over a full straightaway — behind the victor.

Defending Summernationals champion Brandon Sheppard of New Berlin, Ill., slipped by Manville for third on lap 37 and held the position to the finish. Completing the top five were Brian Birkhofer of Muscatine, Iowa, and Babb, who started 12th and 13th, respectively, and steadily advanced forward.

Manville, 28, started second and led laps 2-29 but faded to a seventh-place finish after sticking with the extreme outside lane too long.

Moyer, who started from the pole position, led the race’s first lap before being passed by front-row mate Manville. The six-time Summernationals champion proceeded to spend a healthy portion of the remaining first half of the feature sailing around the top of the speedway, measuring Manville all the way.

“I just wasn’t pushing the issue,” said Moyer, who joined Rick Eckert of York, Pa., as a repeat winner through the first six events of the 2014 Summernationals. “(Manville) was doing a good job there (in the outside lane), and it wasn’t like I could just pull out and pass him by any means. But I knew we had a long time to go, and I just was kind of riding there to where we could race at the end if we had to.

“And I knew the track would change a lot from start-to-finish. The track was fast up there by the wall until it kind of burnt off and went away, and then we could move around top to bottom.”

Moyer ultimately made his move on lap 30, diving underneath Manville down the backstretch and surging ahead off the bottom of turn four. Manville scrapped to stick with Moyer, but on lap 32 he bumped the outside wall between turns three and four — bending his car’s right-rear bodywork — and he tumbled to seventh by lap 38, when he finally abandoned the outside line to race in the traction-filled inside groove.

“I could roll right around that bottom pretty good and that’s kind of what my plan was anyway,” said Moyer, whose four previous Summernationals victories at Tri-City came in 1989, 1996, 2008 and 2012. “You just got to chase the racetrack and everything turned out good for us.”

Moyer didn’t know that his son finished second — giving Moyer Xtreme by Longhorn Race Cars a sweep of the top-two spots — until after the checkered flag but he understandably excited about the turn of events.

“For Junior to come along there — there’s only two of these things (Moyer-edition Longhorn cars) here, so to run one-two with this kind of competition level is pretty cool,” Moyer said. “He’s coming into his own, doing a good job, makes a lot of decisions on his own. It isn’t like I’m doing everything for him like a lot of people think. He’s doing a lot of his own stuff. He outthinks me on a lot of things sometimes. It makes me proud of him.”

The younger Moyer, who started fourth, greeted his father in during the post-race ceremonies by quipping, “I gave you that one,” but he was merely joking.

“That victory lane (comment) was definitely sarcasm,” Moyer Jr. said with a smile. “In the feature we were just the second-best car. Dad had the best car. If we had a caution, the only way we could’ve got him was if he’d have made a mistake — and the best guy in this sport doesn’t make very many mistakes.”

With no caution flags slowing the event, the 50-lap distance was completed in 14 minutes, 29 seconds.

Round 7 of the UMP DIRTcar Summernationals is a 50-lap, $10,000-to-win event scheduled for Sat., June 21, at Fairbury (Ill.) American Legion Speedway.

On a track surface that had been scraped and watered during a break in the action, Jason Feger charger forward from the sixth starting spot to take the lead from Tanner English on lap four and marched on to win the caution-free 12-lap last-chance race. English briefly lost second to Frank Heckenast Jr. on the fourth circuit but moved back to the runner-up spot on lap five and finished there, claiming the final transfer spot to the feature.

Despite the threat of thunderstorms, a big crowd has turned out for the evening’s action. Finding an open seat in the grandstand isn’t easy. … Billy Moyer picked the pole position for the feature in the draw among heat winners. Tim Manville will share the front row as he bids for his first-ever Summernationals triumph, and Brandon Sheppard and Billy Moyer Jr. will form the second row. … The talk throughout the pit area after the heats was about the track surface. Sheppard said he had never seen the track so dry, so early in the night, in his past visits to Tri-City. … Of course, the Tri-City track crew had to gamble a bit with the amount of water they used to prepare the speedway because it appeared that thunderstorms were going to strike. With the threat of rain now passed, the track crew went out at 9:50 p.m. CT to recondition the surface before the B-Main in hopes of improving the competition. Jason Feger proceeded to charge from the sixth starting spot win the last-chance race, which ended at 10:40 p.m. CT. … While the track was mostly bottom-dominant in the heats, Billy Moyer Jr. used the outside line to overtake Ryan Unzicker en route to winning the second heat. Unzicker commented afterward that Moyer’s ability to negotiate the top side surprised him. ... Provisional starting spots for the feature went to Gregg Satterlee and Jason Riggs (Summernationals points), Scott Schmitt (UMP national points) and Scott Weber (track). ... With the completion of the UMP Modified B-Main at 10:55 p.m. CT, the Late Model feature will be rolling onto the track.

Jay Sparks jumped out from the pole position to lead the entire 10-lap distance without receiving a serious challenge. Billy Laycock and Mike Hammerle finished second and third, respectively, to move on to the 12-lap B-Main. The race’s only caution flag flew on lap three when Jim Moon hit the homestretch wall and needed to be towed off.

Billy Moyer pulled off the most dramatic move of the heat races, ducking underneath race-long pacesetter Randy Korte down the backstretch on the final lap and surging ahead off the fourth corner to grab the checkered flag. Korte settled for second place, with last year’s Tri-City Summernationals winner Chris Simpson placing a steady third and Brian Shirley, who won a UMP Late Model feature earlier this year at Tri-City, finishing fourth. Jimmy Mars finished fifth, unable to take the final transfer spot from Shirley.

Brandon Sheppard surged off the pole position to grab the lead at the start and kept fellow front-row starter Bobby Pierce at bay throughout the distance to emerge victorious. Shannon Babb and Rick Eckert scored steady third- and fourth-place finishes, respectively, while Brady Smith’s bid to transfer after starting seventh fell a couple car lengths short as he placed fifth. The first caution flag of the heats flew on lap four when Austin Rettig slowed on the track.

Billy Moyer Jr. came out on top of a titanic battle for the lead with Ryan Unzicker, who settled for second after pacing half of the race’s 10 laps. Moyer nosed ahead to lead lap five and Unzicker popped back ahead on lap six before Moyer gained control for good the following circuit. Brian Birkhofer was overtaken by the fourth-starting Moyer and finished third, while Jim Shereck, who ran the Farley and Spoon River Summernationals events earlier this week, was fourth.

Tim Manville picked up where he left off in time trials, backing up his overall quickest lap with a flag-to-flag heat-race victory. He was never challenged, racing comfortably ahead of Michael Kloos to the finish. Mark Burgtorf slipped by Rodney Melvin on lap seven of the 10-lapper to finish third, while Melvin held on to claim the fourth and final transfer spot. Frank Heckenast Jr. slipped backward from the third starting spot and finished fifth, but he was catching Melvin in the final laps.

Tim Manville of Troy, Ill., turned the overall fastest lap in the split qualifying session, circling the 3/8-mile oval in 16.322 seconds during Group 1. He will start from the pole position in the evening’s first heat race.

Brandon Sheppard of New Berlin, Ill., was fastest in Group 2 with a lap of 16.542 second, earning a pole start in the third heat.

Other heat-race polesitters are Ryan Unzicker of El Paso, Ill., and Randy Korte of Highland, Ill.

Thunderstorms once again have threatened Summernationals action. Pop-up storms barely missed the speedway shortly before 4 p.m. CT; as hot laps ended just before 7 p.m. CT, lightning was visible flashing in a batch of very dark clouds behind the grandstand. … Frank Heckenast Jr. of Frankfurt, Ill., was a late arrival, pulling into the pit area just before the start of the drivers' meeting. He is debuting a Club 29 Race Car — a machine he and his crew finished up earlier today at chassis designer Darrell Lanigan's shop in Union, Ky. The team then made the five-hour haul to Tri-City. ... Tanner English of Benton, Ky., has returned to the Hell Tour — for one night at least — after competing in the circuit’s first three events and then dropping off to regoup. He said he plans to double-back to his hometrack, Kentucky Late Motor Speedway in Calvert City, Ky., for a $3,000-to-win show on Saturday night but expects to run the Summernationals from June 25 a Clarksville (Tenn.) Speedway to June 29 at Lincoln (Ill.) Speedway. … Wendell Wallace of Batesville, Ark., is making his 2014 Summernationals debut behind the wheel of the Larry Moring-owned No. 1. … Invaders from the north include Chris Simpson of Oxford, Iowa, who scored his first-ever Summernationals victory last year at Tri-City, Brian Birkhofer of Muscatine, Iowa, Brady Smith of Solon Springs, Wis., Jimmy Mars of Menomonie, Wis., A.J. Diemel of Bonduel, Wis., and Mark Burgtorf of Quincy, Ill. … Rick Eckert of York, Pa., leads the Summernationals points standings by 12 points (334-322) over Ryan Unzicker of El Paso, Ill., but Eckert will leave the Hell Tour following Saturday night’s show at Fairbury (Ill.) American Legion Speedway to return to the World of Outlaws Late Model Series. … Ten drivers have perfect attendance through five Summernationals events. They are all ranked among the top 10 in the points standings.

After being stymied by rain Thursday night at Quincy (Ill.) Raceway, the UMP DIRTcar Summernationals returns to action with a Friday-night affair at Tri-City Speedway in Granite City, Ill. Round 6 of the schedule 33-race series features a 50-lap A-Main paying $10,000 to win.

Forty-three cars are signed in for the evening's action — the best turnout of the 2014 Summernationals to date.

Tri-City’s drivers’ meeting is scheduled for 6:15 p.m. CT. Hot laps are set to begin at 6:30 p.m. CT with time trials to follow. Other divisions on the program are the UMP Modifieds, Pro Late Models and B-Mods.

Time trials will be split into two groups, with drivers in Group 1 competing for starting spots in heats 1-2 and those in Group 2 qualifying for positions in heats 3-4.