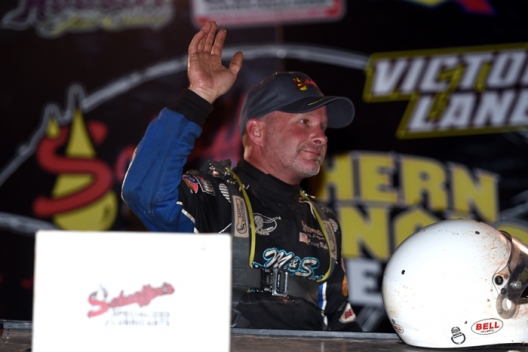 Roberts, the 2015 series champion, inherited the lead from Overton on Friday night as well, but was unable to close out the race when he, like 17 other drivers at Swainsboro, retired early with mechanical issues. He had no such trouble at Screven, though he did have to turn back a valiant effort from Buckingham over the final 10 laps.

“In lapped traffic you never know what happens. (Overton has) been running good,” Roberts said. “It was just meant for us to win I guess. I hate that for them. They’ve been doing a real good job this year, but we’ve lost them that way too, so we’ll definitely take it. It’s a good shot in the arm. We had a good chance to win last night. We just needed a little bit of luck.”

After inheriting the the lead, Roberts had his hands full trying to turn back Buckingham. It took Roberts, who was on a harder compound tire, several laps to get rolling after the caution. That gave Buckingham a chance to pull even with him three separate times on the bottom.

“We didn’t fire off good. It took awhile to get going,” Roberts said. “I seen my wife there telling me to get down, get down. But I didn’t want to pinch him off. We’ve always raced each other clean and with just a few laps to go there when I thought I was clean enough, I got back down where it was kinda rubbered up a little bit. The hard tires starting taking off pretty good when they got a little heat in them and we were able to pull away a little bit there at the end.”

Buckingham last won on the tour July 21, 2016 at Tri-County Racetrack in Brasstown, N.C.. He was oh so close to grabbing his second career Southern Nationals victory and a career-high payday.

“I could’ve run in there and door slammed him, but I’m not gonna do that,” said Buckingham. “I’ve never seen Casey race anyone that way. He’s never raced me that way and I’m not gonna race him that way. I will say, maybe one more (lap) and I was gonna try to slide up in front of him.

“I felt like I was in a position to where I could’ve done that. And if he would’ve stayed composed, he would’ve turned back under me because I was about maxed out on traction. I would’ve had to shear (off) quite a bit (of traction) to have done that and I don’t think I could have held him off.”

It marked the second night in a row that a flat tire derailed Overton while leading. He suffered the same fate at Swainsboro Raceway a day earlier. He did manage to rally from 13th back to seventh, and more importantly, he was able to get around series points leader Donald McIntosh of Dawsonville, Ga., with just a handful of laps remaining to save two valuable points.

After winning three series races in a row, McIntosh started 12th and was never in contention at Screven. He finished eighth as his streak came to a halt, though he did manage to hang on to the points lead as the series heads to Rome (Ga.) Speedway on Sunday.

With his runner-up finish, Buckingham suddenly made the series points race a three-way battle. A model of consistency over the course of the first six events, Buckingham has yet to record a victory, but he has five top-five finishes to his credit and hasn’t finished worse than eighth.

While McIntosh grabbed the points lead from Overton on Friday night, he’s now tied with Buckingham for the top spot in the series standings. Overton led the points following the second and third race on the schedule. Now, however, he sits in third, two markers behind McIntosh and Buckingham.

“I’m pretty excited about (the points),” said Buckingham. “Brandon’s been on a tear and you know he’s really good at Rome. The last time we were there, we were really good too. We lost brakes in the feature. I like that place and we’re gravitating back towards home, so I’m excited. Anyway it falls out, Brandon and Donald, they’re great guys and I want to race with them. I just feel blessed to have that opportunity.”

Brian Ligon won the consolation race, with Craig Vosbergen finishing second ahead of Matt Henderson. Brandon Carpenter rallied from an early spin to finish fourth. The race was slowed by three cautions. Fourth-running Carpenter’s spin on lap two brought out the first caution, collecting Ryan Crane also. A second yellow waved when Crane slid over the infield berm on the front straightaway. The third was for debris on lap five.

Zach Mitchell of Enoree, S.C., cruised to victory in the fourth heat race, winning well ahead of Michael Brown. With a dazzling move off of turn four on the fourth circuit, Brown passed Donald McIntosh and Steve Casebolt to grab the runner-up spot. McIntosh, winner of three straight series events, finished third, with Casebolt holding down the final transfer spot.

Winning the dash into turn one, polesitter and overall fast qualifier Brandon Overton of Evans, Ga., topped Casey Roberts by a straightaway to pick up the victory in the third heat and earn the outside front row for the A-main. Roberts finished second easily ahead of Ross Bailes. Pearson Williams edged Brian Ligon for the final transfer position.

After two attempted starts, officials moved the entire front row of Josh Langley and Brent Dixon back one row. Putting Dennis Franklin of Gaffney, S.C., on the pole, the four-time Rebel Yell champion took advantage and led all 10 laps for the win. Franklin was pressured over the final five laps by Brian Conner, who pulled to within a car length at the finish. Scott Shirey and Brent Dixon completed the top four. Other than the two aborted starts, the caution waved once for Langley, who slowed and did not finish the heat.

Mark Whitener got the jump on polesitter Donald Bradsher on the first lap and led all 10 circuits to win the first heat. Whitener of Middleburg, Fla., won by a straightaway over Bradsher, earning the pole position for the 53-lap main event. Shannon Buckingham turned back repeated challenges from Evident Lloyd Jr. to claim the third position, with Lloyd settling for the fourth and final transfer spot. The race went caution free.

Track officials decided to push the program back approximately 30 minutes due to Saturday’s extreme heat … Riley Hickman’s plans to follow the tour through its remaining Georgia stops took an unexpected wrong turn when he crashed his only car 10 laps into Friday’s feature at Swainsboro. The Ooltewah, Tenn., driver reportedly bent the front clip on his Capital Race Car in the accident, which happened while he was leading the race. Hickman headed home to reassess his damaged car. … Kenny Collins, of Colbert, Ga., who was sixth in points, isn’t at Screven. The first miss for Colbert, who was experiencing water pump problems on Friday night, brings the series perfect attendance down to eight. … David Doherty of Sydney, Australia, who has been on and off the tour, isn’t at Screven. Doherty was 10th in points.

The sixth round of the Schaeffer’s Oil Southern Nationals rolls into Screven Motor Speedway, a 3/8th-mile red-clay oval located about 60 miles northwest of Savannah.

The Super Late Model program includes hot laps, time trials, heat races and a 53-lap main event. Entries will be split into two groups for time trials and then run four heats races and a consolation race. Two series provisionals will be added to make a 22-car starting field.