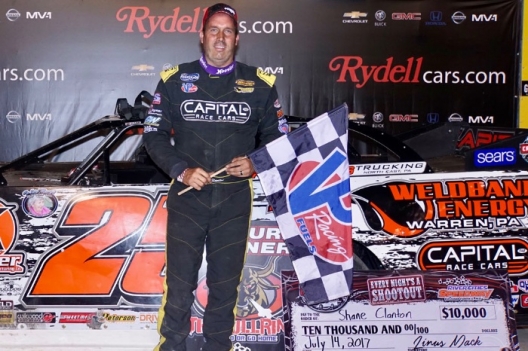 GRAND FORKS, N.D. (July 14) — For the second night in a row, a late-race caution threatened to doom a dominating performance of a race-long leader. Alas, Shane Clanton would have nothing of it.

After seizing control of Saturday’s Acme Tools 50 and racing away from a heated battle for the runner-up spot, Clanton, of Zebulon, Ga., survived a lap-47 caution that allowed his closest pursuers — Tyler Erb of New Waverly, Texas and Brandon Sheppard of New Berlin, Ill., along with the night’s overall fast qualifier, Mike Marlar of Winfield, Tenn., — a chance to steal a victory.

It seemed eerily similar to Friday night’s finish, when Sheppard went from third to first following a caution with five laps remaining for his ninth Outlaws win of the season. Clanton, however, never gave Erb or Sheppard a chance to take away his fourth series victory of 2017.

He pulled away on the restart and beat Erb to the finish by .864 of a second, earning a $10,000 victory. Sheppard chased Erb home in third, while Marlar continued to prove his mettle with a fourth-place finish, his third-top five run in four World of Outlaws races on this upper Midwest swing. Eric Wells of Hazard, Ky., bounced back from a disappointing finish on Friday night to finish fifth.

Though he went relatively unchallenged after taking the lead, Clanton’s advantage over Erb was shrinking over the final 10 laps. With eight circuits remaining, Erb’s deficit was close to two seconds. When the caution waved for Chad Simpson’s slowing car on lap 47, Erb had chopped the lead in half.

“I definitely didn’t want to see (the caution),” said Erb. “Shane did a great job. He got me there on the start and that’s what he needed to do. (I) about turned over there in (turns) three and four and had to fight my way back to second. Once I got back to second with about 10 laps to go I really started pushing it. It just wasn’t meant to be tonight.”

Clanton, who appeared well on his way to his 41st career series victory when the final caution came out, hasn’t made much noise since winning at Tazewell (Tenn.) Speedway back on June 2. As the series wraps up its swing through Minnesota and North Dakota heading into a 12-day break, it’s a welcome triumph as it kept him in hunt for a second series championship. He sits just 26 markers out of third place behind Chris Madden of Gray Court, S.C., who notched he second-straight sixth-place finish following back-to-back wins.

“When you get behind a little bit and you try to get above the next guy in front of you, sometimes you mess up. And that’s what we’ve been doing the past month,” said Clanton.

Sheppard, who started ninth and finally cracked the top five on lap 15, said his Rocket Chassis house car team had work to do as well, especially as his competitors continue to make gains.

“We just got a little bit behind there qualifying,” said Sheppard. “We’ve been messing with some stuff on the car, trying to get a little bit better. You know, some guys are catching up. Shane and Chris and Turbo, they all do a really good job and Marlar, he’s making it tough on us out here. You know we’re putting in a lot of work on this thing. We’ve just got to get where we can qualify up front and win a heat race again. We’ve got a really awesome car every night in the feature, so we’ve just got to work on our early program.”

Notes: The main event took less than 17 minutes to complete from green to checkered, but the program was slowed by afternoon rain showers that left crews scurrying to get loaded and move out of the River Cities pit area. World of Outlaws drivers didn’t get on track for hot laps until close to 7:30 p.m. and qualifying started shortly after 8 p.m. “Mother Nature threw us a curve ball there,” said Shane Clanton. “We thought it was gonna rain pretty hard. We’ve been stuck here before, so everybody loaded up and got out of the pit area. Thanks for all the fans sticking it out and giving us a place to race. This is a cool place to race. It’s always racy. Hat’s off to the guys who work on the race track.” … Brandon Sheppard was complimentary of the track crew as well. “The race track turned out a lot better than I imagined it could’ve with all the rain we got,” he said. “It looked like it was gonna be pretty top dominant, but they worked on it a little bit for us and made it an awesome two-grove racing surface.” ... Fifteen cars finished, with 13 completing all 50 laps. … Eric Wells of Hazard, Ky., had a good run go south on Thursday night when he gave up the sixth position with five laps remaining due to mechanical trouble. He bounced back on Friday to record his seventh top-five finish of the season, which helped him move from eighth to seventh in series points, leapfrogging Chub Frank of Bear Lake, Pa. … Frank drew the first caution when he slowed with a flat on lap eight. His team quickly put on a fresh Hoosier and he returned to the track. He eventually finished 15th, two laps off the pace. … Scheduled to start 15th, Rick Eckert of York Pa., pulled off during the parade lap and was credited with 24th. … In 10 series races at River Cities going back to 2006, there have been seven different winners. Tim McCreadie of Watertown, N.Y.; Darrell Lanigan of Union, Ky., and Tim Fuller of Watertown, N.Y., have two WoO wins each at River Cities.