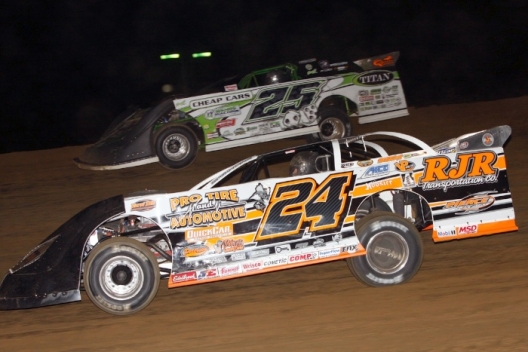 In what many observers called one of the best Dirt Late Model races in the 3/8-mile track’s history, Feger outdueled race-long pacesetter Ryan Unzicker of El Paso, Ill., for the lead on lap 27 and held off challenges from Unzicker and Shannon Babb of Moweaqua, Ill., to score his first Hell Tour triumph of 2014.

Unzicker, who started from the pole position, briefly lost second place to Babb but fought back to mount a last-ditch bid on Feger. He lost ground to Feger in lapped traffic with two laps remaining, however, and settled for his second straight and third runner-up finish in five Summernationals events.

Brady Smith of Solon Springs, Wis., took advantage of Babb’s slip over the outside lip of the racetrack in turns three and four on lap 32 to grab third place and finished there. Babb settled for fourth after his dramatic outside charge from the 11th starting spot nearly reached first place and Randy Korte of Highland, Ill., completed the top five.

Feger, 35, snapped out of a frustrating stretch of racing with the $5,000 triumph. He had been winless since capturing a Lucas Oil Late Model Dirt Series event on May 3 at Paducah (Ky.) International Raceway.

“It feels good to kind of get that monkey off our back,” said Feger, who registered his 10th career win on the grueling Summernationals circuit. “We’ve been fast — we were pretty good at Eldora (Speedway) all weekend (for the Dream XX June 5-7), and we were good at Pevely (Mo.) and Farmer City (Ill.) the week before — but just didn’t have much luck.

“We’ve had some motor issues — just self-inflicted — and other stuff happen, so we needed some money to give our engine builder and get the tire guy paid off. This definitely helps things a lot.”

Feger, who won the Summernationals title in 2010, earned every penny of his first-place payoff. He started second alongside Unzicker and cruised in the runner-up spot behind the polesitter until the race’s halfway point, when Babb, running hard in the outside groove in an attempt to duplicate his winning effort the previous night at Farley (Iowa) Speedway, began to contest the position.

Thanks to a head’s-up from a team member, Feger moved up the track on lap 19, preventing Babb from simply sailing by for second. Several frenetic circuits of action ensued, with Unzicker, Feger and Babb sometimes racing three abreast at certain points on the speedway.

“I never would have thought the top would come in like it did,” said Feger, whose only previous victory at Spoon River came in a Monster Midwest Series event on July 23, 2008. “I thought I heard somebody (running the outside) and I saw the ‘18’ (Babb) on the scoreboard, and then I looked down at my crew guy and he was telling me to go to the top. So I jumped up there figuring I’ve got nothing to lose and might as well give it a shot, and it paid off.”

Feger actually made his winning move on the inside of the track, ducking underneath Unzicker entering turn three while working lapped traffic and surging ahead off the fourth corner to assume command on lap 27. Babb ran the outside off turn four to also overtake Unzicker and appeared primed to battle Feger to the finish, but Babb’s hopes effectively ended when he got too high in turns three and four on lap 32 and watched Unzicker and Smith slide by him before he could regain his momentum.

“I went from (11th) to second at one time, so I was smiling,” said Babb, a three-time Hell Tour champion who won Summernationals features at Spoon River in 2005, ’07 and ’11. “I was trying to work on (Feger) for a little bit, but the way things turned out we zigged and zagged and ended up fourth.

“The car was great and I think we went right on tires — and I think we found the groove first. We were rolling up through there, but you gotta get by ‘em. Unfortunately, we didn’t get by ‘em tonight.”

With the race running caution-free from lap nine to the finish, Feger had no chance to catch his breath during the final circuits. He just stayed hard on the gas, which served him well as he split two lapped cars down the backstretch on lap 38 in a move that ultimately allowed him to keep the resurgent Unzicker at bay.

“I didn’t really know somebody was that close to me,” said Feger, who had Unzicker hot on his rear bumper starting on lap 34. “Of course, it’s kind of hard to see your spotter here when you’re in traffic, so I didn’t know for sure how close (Unzicker) was. But I knew I couldn’t take it easy. I was trying not to make any dumb mistakes, but I wasn’t trying to be patient. I was trying to make something happen and I guess getting by those lapped cars might have been the difference.”

Unzicker, 32, came out on the wrong end of encounters with slower cars, dooming his hopes to break into victory lane for the first time on the 2014 Hell Tour.

“I really think I would’ve won the race if I wouldn’t have caught some lapped traffic there with about four (laps) to go,” said Unzicker, who won the 2010 Summernationals feature at Spoon River. “I drove back up to (Feger) on the bottom once I parked it on the hub, but it is what is. You win and lose races like that, so you just move on. Second’s good for (Hell Tour) points racing, though.”

Unzicker was asked after the race if he contemplated moving to the outside groove when Feger and Babb arrived to challenge him. He said it wasn’t really an option for him.

“Babb and Jason, they just got that top rolling and I was just a little too tight to run up there,” Unzicker commented. “I was also leading the race and didn’t want to go up there and jump the cushion, so I was just trying to play it cool and keep all four wheels on the ground and the car in one piece. I was just rolling the middle trying to play that Billy Moyer line, but I guess I wasn’t able to get it done for all 40 laps.”

Just two caution flags slowed the event. The first was for an aborted original start, and the second came on lap nine when a car slid off the backstretch.

The race’s most notable casualty was Bobby Pierce of Oakwood, Ill., whose car was left with a locked-up left-front wheel after he clipped an inside marker tire in turn four on the original start. He pulled into the pit area and was credited with a 22nd-place finish.

Round 6 of the UMP DIRTcar Summernationals is scheduled for Thursday at Quincy (Ill.) Raceway. A 40-lap feature paying $5,000 to win is on tap.

Track crews reworked the racing surface after the B-Main and as of 9:35 p.m. CT were finishing the running-in process. The 40-lap will line up momentarily. ... Scott Schmitt and Jason Riggs received Summernationals provisionals, McKay Wenger received a UMP nationals points provisional and Nick Bauman moved into the feature thanks to a track provisional. ... Kolby Vanderbergh, who starts ninth in the feature, is making his first-ever Super Late Model start in Randy Korte's backup car. Korte has been helping the 16-year-old Crate Late Model racer for the last two years and has arranged to sell his racing equipment to Vanderbaugh's family after he retires from driving at the end of the 2014 season.

Rick Eckert cruised to victory in the 12-lap B-Main, leading the entire distance. Jim Shereck finished 1.651 seconds behind in second to claim the final transfer spot to the A-Main.

Veteran Pete Parker, the 1988 Summernationals champion, controlled the 10-lap C-Main for eighth- and ninth-place finishers from the heats. He beat teenager Kyle Hammer to the finish line with Brian Harris claiming the third and final transfer spot to the B-Main.

Jason Feger controlled the first 10-lap heat race, keeping Brandon Sheppard at bay throughout the distance. … Kolby Vanderbergh drove Randy Korte’s backup car to a third-place finish in the first heat. Later, Korte emerged triumphant in the third heat over Brady Smith. … Billy Moyer Jr. outdistanced Bobby Pierce to capture the second preliminary, which saw Brian Shirley use the outside lane to advance from the sixth starting spot to a third-place finish. … Fast-timer Jason Jaggers tumbled from first to fourth place on the opening lap of the third heat and stayed in the final transfer spot to the finish . … Ryan Unzicker outdueled Jimmy Mars to win the fourth heat. The two drivers battled side-by-side for much of the distance before Unzicker inched away over the final circuits. … Allen Murray slid over the turn-three bank on the opening lap of the fourth heat, but he still grabbed the fourth and final transfer spot. ... Unzicker driew the pole position for the 40-lap feature, giving him the number-one starting spot for the second consecutive night. Feger will start second, Korte goes off third and Moyer starts fourth.

Jason Jaggers of Wyanet, Ill., clicked off the overall fastest lap of the split qualifying session, turning a circuit of 13.636 seconds in Group B. He earned the pole position for the third 10-lap heat race with his clocking.

Jason Feger of Bloomington, Ill., was quickest in Group A with a lap of 13.847 seconds and will start from the pole in the first heat.

The heat is cranking up as temperatures have hit 90 degrees and the humidity has increased. Thunderstorms passed close to Spoon River earlier this afternoon but no rain has fallen. … Rick Eckert of York, Pa., enters tonight’s action leading the Summernationals points standings by 38 points (285-247) over Ryan Unzicker of El Paso, Ill. Shannon Babb of Moweaqua, Ill., who won last night’s feature at Farley (Iowa) Speedway, sits third (-51 points), followed by Bobby Pierce of Oakwood, Ill. (-60) and Brian Shirley of Chatham, Ill. (-216). … Pierce reported that he ran the last half of last night’s 50-lap feature at Farley without rear brakes. He still managed to finish fourth. … Gregg Satterlee of Indiana, Pa., will run his second car after his primary machine was sidelined by a busted oil-pump belt during last night’s heat action at Farley. The engine in the car he’s driving tonight is the only operational powerplant he has left to complete the final four nights of his first-ever Hell Tour excursion. … Jimmy Mars of Menomonie, Wis., said he retired from Farley’s A-Main after clipped the inside guardrail between turns one and two and folding his car’s nosepiece. … Drivers joining the field tonight include Brady Smith of Solon Springs, Wis., Kevin Weaver of Gibson City, Ill., Billy Drake of Bloomington, Ill., McKay Wenger of Fairbury, Ill., and Scott Bull of Fairbury, Ill.

The UMP DIRTcar Summernationals stops in the heart of central Illinois for a Wednesday-night show at Spoon River Speedway in Banner. A 40-lap feature paying $5,000 to win is on tap for the fifth event of the scheduled 33-race series.

A 35-car field has signed in for action. Time trials will be split into two groups, with results from the first group aligning heats 1-2 and results from the second group lining up heats 3-4.

A high-banked, 3/8-mile oval, Spoon River is a longtime staple on the Hell Tour. A total of 18 Summernationals races have been contested at the track since 1986 with 13 different drivers emerging victorious.

Hot laps are scheduled to begin at 6 p.m. CT with competition set to follow. Racing for UMP Modifieds and Hornets is also on the agenda.