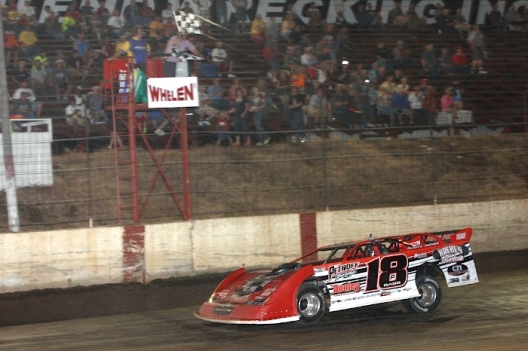 When race-long dominator Billy Moyer of Batesville, Ark., spun in turn two with a blown right-rear tire on lap 41, Shannon Babb of Moweaqua, Ill., swept into the lead and went on to capture the 50-lap headliner.

With the $10,000 triumph, Babb, 40, broke a tie with Moyer atop the Hell Tour’s career win list. It was Babb’s 84th checkered flag on the grueling month-long series, moving him one ahead of the 56-year-old Moyer, who had pulled even with his protégé after winning the Summernationals opener on June 12 at Kankakee (Ill.) County Speedway.

“Challenging Billy Moyer for something like the alltime win record is mind-blowing,” said Babb, who won Summernationals titles in 2005 and ’06 while driving for Moyer’s father. “It’s just a great honor to be up there with him.”

Ryan Unzicker of El Paso, Ill., who started from the pole position and led the race’s first lap before Moyer surged ahead, finished second, 1.969 seconds behind Babb. It was Unzicker’s second runner-up outing and third top-three run in four Summernationals events.

In the first Summernationals show at Farley since 2005 — and the first since the track was shortened from its sprawling half-mile size to a 3/8-mile layout — Babb advanced from the sixth starting spot to third place by lap 12. He overtook Unzicker for second on lap 35 and was turning up the wick to bid for the lead when Moyer suddenly twirled to a stop in turn two due to an exploded right-rear tire after pacing laps 2-41.

“I’d saved a lot and when I did duck down there to the bottom of (turns) one and two we gained a lot of ground,” Babb said. “We were able to get by Unzicker down there, and I had just started nosing under Moyer when he had the tire go down. I don’t know if we would’ve been able to get by him or not, but I think that the car kept getting better and better, so …

“I would really have liked to have wrestled with him, but I’m glad he broke because I didn’t have to wrestle with him,” he added with a smile. “I hate to see anybody break, but I’m glad to be able to get the win a little bit easier.”

The triumph was Babb’s second of 2014 with his new Rocket Chassis.

“We just really haven’t raced a whole heck of a lot this spring at all because of the weather and other stuff,” Babb said. “The highlight of our year so far was our win at Farmer City (in the World of Outlaws Late Model Series Illini 100 on April 26). Now to get out here every night and start taking notes and working with Mark (Richards of Rocket Chassis) — it’s a lot of fun.”

Unzicker, 32, kept Babb in his sights during the race’s final nine-lap run, but he wasn’t able to mount a serious challenge.

“I was hanging on to the car for the last five to 15 laps,” said Unzicker, who made his first-ever start at Farley. “It was getting too free from the center off. I probably abused (the tires) a little too much.”

Unzicker spent much of the distance attempting to mirror Moyer’s moves.

“Anytime you got Moyer up front, it’s pretty hard (to win),” Unzicker said of the veteran driver, who started third. “I was just kind of hanging on to second and trying to learn something. I was running some lines that he was running.”

Four caution flags slowed the race, including Moyer’s race-ended woes on lap 41. The first came on lap 12 for Jason Riggs of Harrisburg, Ill., who spun in turn four. Later, Brian Birkhofer of Muscatine, Iowa, slowed in turn two on lap 14 after his car’s rearend broke as he ran in the top 10 and Brian Shirley of Chatham, Ill., fell off the pace with a flat right-rear tire on lap 40 (he pitted and returned to finish sixth).

The UMP DIRTcar Summernationals continues Wednesday with a 40-lap event paying $5,000 to win at Spoon River Speedway in Banner, Ill.

Summernationals points leader (among expected regulars) Ryan Unzicker will start from the pole position in the 50-lap feature following the redraw among heat winners. Brian Shirley will go off from the outside pole and Billy Moyer will start third. … Gregg Satterlee was knocked out of his heat race by a broken oil-pump belt. He initially began loading up for the night, but when informed that he was in line for a provisional starting spot he decided to unload his backup car for the feature. The Pennsylvania driver did say he’s unsure if he will compete in Wednesday night’s Hell Tour event at Spoon River Speedway as a result of the motor malfunction. … Joining Satterlee as provisional starters in the feature are Mike Fryer (Summernationals), Pete Parker (UMP national points) and Tyler Bruening (track). ... World Racing Group president Tom Deery is on hand to witness one of his company’s marquee series in action at a track just two hours from his boyhood home in Rockford, Ill. ... Justin Kay of Wheatland, Iowa, won the 30-lap IMCA Late Model feature, taking the checkered flag at 9:15 p.m. and setting the stage for the Summernationals headliner.

Brian Shirley controlled the action from start-to-finish, taking advantage of his pole starting spot. Shannon Babb wrestled second from Jimmy Mars early in the race and tried several different lines in an attempt to run down Shirley, but he crossed the finish line 0.917 of a second behind the victor. Mars was nearly three seconds behind Shirley in third place, with Ray Guss Jr. and Andy Eckrich completing the top five.

Billy Moyer dominated the entire 10-lap distance, beating Rick Eckert to the finish line by 1.586 seconds. Bobby Pierce hustled forward from the sixth starting spot with some early moves to finish third, with Scott Schmitt and Jason Jaggers completing the top five. Gregg Satterlee appeared headed to a fifth-place finish until slowing on the final lap and stopping short of the checkered flag.

Ryan Unzicker burst into the lead at the initial start and stayed there for the entire distance, turning back an early challenge from Brian Birkhofer and holding off a final charge from the Iowa driver. Birkhofer settled for second place, one car length behind Unzicker. Brandon Sheppard ran steady in third for the entire distance, with third-starter Billy Moyer Jr. falling to fourth and Jim Shereck taking the fifth and final transfer spot

Billy Moyer of Batesville, Ark., was quickest in the group time-trial session, clicking off a lap of 15.058 seconds that was nearly three-tenths of a second faster than the next driver on the speed overall chart.

Moyer’s lap puts him on the pole for the night’s second 10-lap heat race. Other earning pole starting spots for prelims thanks to group fast-timers were Brian Birkhofer of Muscatinie, Iowa, and Brian Shirley of Chatham, Ill.

Farley Speedway and the surrounding area was deluged by 3 to 4 inches of rain overnight, leaving the infield and other parts of the ground soft and muddy. But the racetrack appears ready for competition. … Rain has already washed out two of the first five scheduled Hell Tour events and is again a factor tonight. Clouds have been building as the afternoon progresses and the chance of thunderstorms increases later tonight, so UMP DIRTcar director Sam Driggers said officials plan to push the program through as quickly as possible. … Farley’s pit area is normally in the infield, but for the first time haulers are parked outside the first and second turns. Sightlines for fans will be much improved as a result. … Jimmy Mars of Menomonie, Wis., experienced a problem as soon as he pulled into the pit area: his rig became stuck in the soft earth. A tractor had to be summoned to pull him out of the muck. … Jim Shereck of St. Charles, Mo., is making his first Summernationals start of 2014 in a Barry Wright Race Car that Steve Francis drove to crown-jewel victories in last year’s Topless 100 and Knoxville Nationals wearing Clint Bowyer Racing colors. Shereck plans to compete in Wednesday night’s Hell Tour stop at Spoon River Speedway in Banner, Ill., and Friday night at his hometrack of Tri-City Speedway in Pontoon Beach, Ill. … A visit to Farley is certainly enjoyable to Rick Eckert’s crewman Danny White, a native of Dubuque, Iowa, just 20 minutes down the road. White had a chance to spend Monday night at his parents’ home and will have a contingent of family members on hand tonight. ... Defending Farley IMCA Late Model champion Joel Callahan of Dubuque, Iowa, Ray Guss Jr. of Milan, Ill., and Jason Rauen of Farley, Iowa, are pulled double-duty, competing in both the Summernationals and companion IMCA Late Model action. ... Tyler Bruening of Decorah, Iowa, was a late arrival, increasing the field to 25 cars.

After a scheduled night off, the UMP DIRTcar Summernationals returns to action with Round 4 at Farley Speedway. Twenty-five cars are signed in for the racing program.

All previous Summernationals events at Farley were contested on the facility’s large half-mile oval, but tonight’s action will run on a 3/8-mile layout. The third and fourth turns of the original track were shortened two years ago.

Hot laps are scheduled to begin at 6 p.m. CT with competition set to follow.

The program will include three 10-lap heat races (five transfer from each), one 12-lap B-Main (three qualify) and four provisionals (two Summernationals points, one UMP national points, one track).