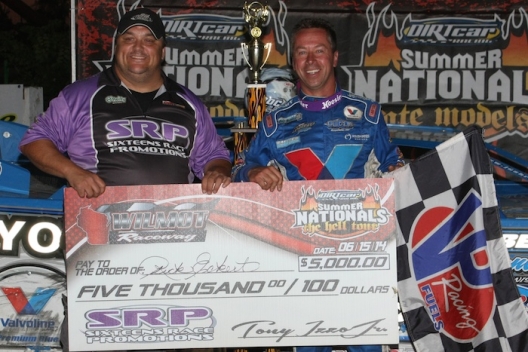 WILMOT, Wis. (June 15) — Rick Eckert liked winning his first UMP DIRTcar Summernationals event so much he didn’t wait long to do it again.

The York, Pa., driver of the Rocket Chassis house car led all 40 laps Sunday at Wilmot Raceway for a $5,000 victory as he fought off early challenges from Ryan Unzicker of El Paso, Ill., and stayed safely ahead of a late charge by three-time series champ Shannon Babb of Moweaqua, Ill.

It capped a clean sweep of the night’s Late Model events on a day with threatening mid-afternoon weather that saw the series draw just 19 entries, the fewest since a 21-car event in the 2012 season.

“It’s never easy. We had a perfect night, though,” said Eckert, whose first-ever series victory came Friday at Cedar Lake Speedway in New Richmond, Wis. “We set fast time, we won our heat, and we won the feature, you know. That’s the kind of night you like to have, but you don’t have very often.”

Eckert, a former World of Outlaws Late Model Series champion making the most of a WoO break to run select races on the sister Summernationals tour, took the checkers 1.340 seconds ahead of the ninth-starting Babb, who grabbed the second spot from Unzicker on the 34th lap and cut Eckert’s three-second lead in half over the final fix laps.

Unzicker, back in action after motor problems at Cedar Lake nearly ended his pursuit of the $25,000 tour title, finished third followed by Brian Shirley of Chatham, Ill., and Mike Spatola of Manhattan, Ill., in a race that began as dusk fell in southeastern Wisconsin.

Bobby Pierce of Oakwood, Ill., who entered the race third in series points, retired after 15 laps with a hole in his engine’s oil pan after something broke in the lower end of his powerplant.

Eckert and Unzicker ran side-by-side much of the first few laps, with Unzicker nearly grabbing the lead when Eckert slipped high in turn four on the second lap. But once Eckert settled in, he pulled away to lead by nearly a full straightaway by the midway point with Unzicker in pursuit along with reigning series champion Brandon Sheppard of New Berlin, Ill., Shirley and Babb, who was advancing from his fifth-row starting spot.

By then, Eckert was solidly ahead by a full straightaway, although he knew his soft-tire choice on the right rear meant his the rubber wasn’t as durable as the harder right-rear on Babb’s No. 18.

“We were a little softer on tire, and I knew our tire was dying there towards the end, and they said Babb was coming pretty hard there at the end,” Eckert said, “but we had enough tire to get to the end anyway.”

Babb had scored just 10th- and 14th-place finishes in the first two series event and got a shot in the arm with his runner-up finish.

“It was a heck of a run. I knew Rick was going to be hard to beat,” Babb said. “Hot laps and qualifying we weren’t so good. We just had to work on our car the whole time and got it better for the race.”

Three cautions slowed the action, two early in the race. The first appeared on the third lap for a turn-four tangle between Jason Riggs and Mike Fryer near the back of the field. The second came out on lap six when seventh-running Rich Bell broke a fifth-arm and snapped a driveshaft. The final slowdown appeared on lap 23 when Jim Moon didn’t quite make it to the infield after pulling out of the race.

The series takes a night off before returning to action Tuesday at Farley (Iowa) Speedway for the fourth of 31 races on the 39-day series.

Polesitter Brandon Sheppard led all the way, but Mike Spatola pressured him the last half of the race. Spatola fought off an early challenge from Shannon Babb and went to work on Sheppard, nearly getting underneath exiting turn two at the halfway point. But Sheppard held on with Spatola and Babb in second and third.

Outside-front row starter Ryan Unzicker kept polesitter Bobby Pierce in check through the first half of the race, then survived a brief engine shutdown when he hit a hole in turn one. The second-running Pierce ran into Unzicker, whose car refired upon contact, requiring Pierce had to restart on the tail because he came to a stop. Unzicker led the rest of the way with Rich Bell second and Mitch McGrath third. Pierce actually got back to the fourth spot, but he was penalized for jumping the mid-race restart and was scored fifth behind Gary Christian.

Polesitter Rick Eckert led all 10 laps, fighting off early challenges from third-starting Brian Shirley and pulling away on the tight-cornered oval. Shirley ran a comfortable second most of the way but had his hands full with Gregg Satterlee in the closing laps. Outside front-row starter Tanner English lost the third spot to Satterlee before the halfway mark and finished fourth just ahead of Billy Moyer Jr. in the caution-free prellim.

The drivers topping Wilmot's qualifying groups — Rick Eckert, Bobby Pierce and Brandon Sheppard — were also the three drivers who led the last series race Friday at Cedar Lake Speedway in New Richmond, Wis. ... Cedar Lake's Saturday night show rained out for the third time in four years. There were rumblings about starting the tour at Cedar Lake next season with three races on Thursday-Saturday. ... WIlmot has been on the tour four years drawing 31 cars apiece in 2010 and 2012 with 25 cars last year. ... Wilmot's 19 cars is the fewest on the series since Lincoln Park Speedway in Putnamville, Ind., drew 21 cars in 2012. ... The weather forecasts likely scared off a few drivers, and while the skies were ominous parts of the afternoon, and rain sprinkles hit the track for a few minutes about 4 p.m., it's a pleasant evening with no threatening weather. ... The crowd, however, appears to be the smallest in the tour's four years at Wilmot.

Series points leader Rick Eckert of York, Pa., topped 19 qualifiers at Wilmot, tripping the clock with a 15.087-second lap at the 3/8-mile circuit.

Eckert will start on the pole of the first of three heat races. Other heat race polesitters: Bobby Pierce of Oakwood, Ill., and Brandon Sheppard of New Berlin, Ill. Every driver will transfer to the main event with the lineup set by heat race finishes.

The third round of the rain-plagued UMP DIRTcar Summernationals is rolling at Wilmot Raceway with 19 drivers entered for the $5,000-to-win event.

Ryan Unzicker of El Paso, Ill., is the only previous series winner on hand — Rodney Melvin of Benton, Ill., won in 2010 and Kevin Weaver of Gibson City, Ill., won last season — for the night’s 40-lap event.