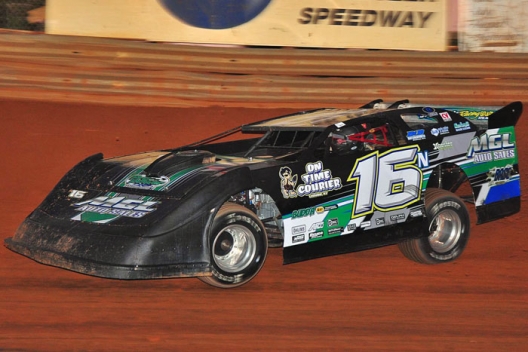 Making his seventh start of the season in a Bloomquist Race Car from fellow Kentuckian Justin Rattliff’s stable, Neat, 34, set fast time in qualifying and rolled off the pole position in the 52-lap feature to pocket $5,200.

The race honored one of East Tennessee’s all-time best behind the wheel of a Dirt Late Model. The 46-year-old Sexton, of Pigeon Forge, Tenn., passed away on Jan. 10, 2013, after a seven-year health battle.

Known as ‘Superman’ for his racing exploits, Sexton captured Volunteer Speedway championships in 1991 and ’95. In the decade from 1995-2005, Sexton earned 10 Southern All-Star Racing Series victories at Atomic Speedway and Volunteer and still holds the tour’s record for most career $10,000 triumphs.

Neat’s biggest scare on the initial start when he and fellow front-row starter Jason Welshan got out of shape while battling for the lead in turn two, which in turn jammed the field up behind them and caused a major multi-car wreck on the backstretch. Strong contenders Stacy Boles and Billy Ogle Jr. were eliminated from action with severe damage, while Aaron Ridley, Riley Hickman, Mark Douglas, Josh Putnam, Tommy Kerr and others continued with bent sheet metal.

The next try at green proved to be successful, with Neat powering into the lead over Welshan, Vic Hill, Randle Chupp and Todd Morrow. Hill, a five-time Volunteer Speedway Super Late Model champion, got around Welshan for second on lap four racing off the fourth turn.

Neat was setting a blistering pace out front, pulling out to almost a full straightaway advantage over Hill by the halfway point. A caution flag waved on lap 39 when Welshan’s car went up in smoke at end of the front straightaway, but Neat pulled away again on the restart as Hill struggled with a fuel-pickup issue that would end his race moments later.

Notes: The triumph was Neat’s first of 2014 and his first-ever on the Southern All-Star Racing Series. … The 52-lap distance and the $5,200 winner's purse were nods to Sexton’s familiar No. 52 Late Model. … Skylar Marlar and Bobby Mays spun together to draw a lap-one yellow. ... A debris caution paused the action on the seventh circuit. ... SAS points leader Riley Hickman of Ooltewah, Tenn., pulled double duty, finishing fifth in the Super Late Model feature and winning the Limited Late Model feature for a $2,000 payday. ... Steve Jones of Maryville, Tenn., won the Crate Late Model feature. It had been four years since the 50-year-old last driven a race car at Volunteer.