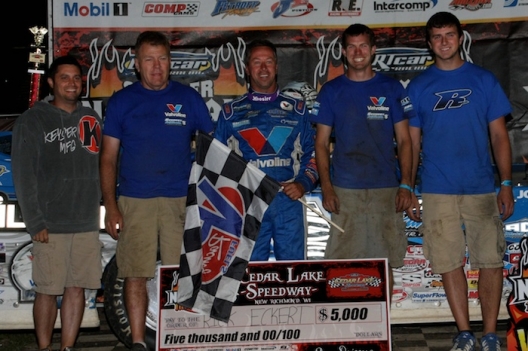 NEW RICHMOND, Wis. (June 13) — Competing in a rare UMP DIRTcar Summernationals event, Rick Eckert of York, Pa., found himself mixing it up Friday with a pair of Illinois youngsters in Brandon Sheppard, 21, of New Berlin and Bobby Pierce, 17, of Oakwood.

The 48-year-old Eckert showed a little veteran prowess in grabbing second from Sheppard, then overtaking Pierce coming to the white flag at Cedar Lake Speedway for his first career series victory and a $5,000 payday.

“Racing them two kids, they’re going to win a lot of races, no doubt about it,” Eckert said in victory lane. “So it’s nice to steal one from 'em now while I still can.”

Pierce, who took the lead from the polesitting Sheppard on the 19th of 40 laps, had nearly a straightaway lead by the time Eckert got to second with 11 laps remaining, but the lower-running Eckert tracked down the high-running Pierce in the waning laps.

On the 39th lap, Eckert slid up and under Pierce exiting turn four and went on to victory, becoming the first Pennsylvania driver to crack victory lane on the Midwestern-based tour.

With Pierce flying high up top, Eckert eventually settled on a lower groove in trying to track him down.

“He was doing a good job up there,” Eckert said. “I tried to run up there with him and I couldn’t do a good as job as he could. So that’s why I started changing my line to find a different place to run.”

But it was almost too late as the 40-lapper wound down.

“I finally got rolling and I looked up at the scoreboard and it was lap 37, and I was like … I’ve gotta get going.”

Eckert made up enough ground to take command and lead the final two laps. Pierce said his groove wasn’t quite the winning one.

“Around the top like that is just freaking hard to do,” the runner-up said. “You know if you make a little bit of a mistake, they’re going to gain a lot of ground on you. If you hit it right, you’re going to be a lot faster than them.

“Heck, I’m satisfied with that run. It’s good for points and everything. This is one of the hardest tracks to win at, I think it is, anyway. The competition is always tough here.”

Two cautions slowed the action. The first appeared on the seventh lap when seventh-starting Shannon Babb rolled to a stop in turn four. A lap-22 yellow came out when Brian Shirley slowed just in front of Pierce entering turn three.

Cedar Lake’s Masters weekend is scheduled to wrap up Saturday with another Summernationals and USMTS modified program with Late Models running 50 laps for a $10,000-to-win main event.

Provisional starter Ryan Unzicker of El Paso, Ill., will start on the tail in Jim Moon’s car after breaking an engine on the last lap of the consolation race. Unzicker also broke an engine in hot laps and says he won’t be able to compete until Sunday at the earliest after one of his engines is repaired, but he might be done for the series. … Brian Shirley dropped out of the consolation race when the skid plate to into the rack and hampered his steering after a collision with Gary Christian. He’ll also start the feature with a provisional. … Tanner English, who starts 15th in the feature, changed to his third carburetor of the night before the main event. “It’s just stumbling,” older brother Justin said, “so we keep changing carburetors." ... Besides Shirley and Unzicker, other provisional starters are Lance Matthees (track) and Scott Schmitt (2013 UMP weekly points)

Adam Hensel led all the way from the pole to transfer to the main event along with Gregg Satterlee, who got a gift when second-running Ryan Unzicker slowed exiting turn four heading for the checkers. Satterlee got the second and final transfer spot while Unzicker is expected to get a provisional starting spot for the main event. While Hensel controlled all 12 laps, the outside front-row starting Unzicker repelled challenges from Satterlee early, including when Satterlee was nearly squeezed into the backstretch wall trying an outside move. But Satterlee eventually got by at the finish while Unzicker ended up seventh. Two cautions slowed the action. A lap-two yellow appeared when fifth-starting Jeff Provinzino spun in turn one, triggering a scramble among cars near the rear of the field. Brian Shirley slowed for a lap-four yellow (he’s in line for a provisional starting spot).

In the redraw among heat winners, Brandon Sheppard will be on the pole for the 40-lap feature with Rodney Sanders alongside. Billy Moyer and Rick Eckert will start on the second row. ... During a break in the action, track workers spent time on a spot in the track at the top of the backstretch where water appears to seep. Workers used the grader then packed it down with more heavy equipment. ... In the eight Late Model and USMTS modified heat races, a single caution appeared for a called-back start. Heats were over by 7:50 p.m. and the modified consolation pulled onto the track about 8:10 p.m.

In the best heat of the night, third-starting Rodney Sanders eclipsed Brian Birkhofer and then leader Brady Smith by the halfway point for an impressive 10-lap heat victory. Smith got the early lead on the polesitter Birkhofer by running the high side, but Sanders ended up going below both of them and edged away. Smith gave up his high groove with a few laps remaining, allowing Birkhofer to go around and grab the second spot. Tim McCreadie, getting comfortable in Jordan Yaggy's No. 77, dropped Smith to fourth on the final lap. Gary Christian was fifth in nipping Brian Shirley at the line.

Rick Eckert slid in front of polesitter and early leader Jason Rauen in turn four on the second lap and pulled away for a victory in the third heat, becoming the first non-polesitter with a heat win. Rauen couldn't keep up with Eckert but held on for second while groove-swapping Pat Doar finished third ahead of Tanner English, the final transferring driver. Ryan Unzicker was just behind English in fifth. Lucas Peterson and Jason Riggs retired to the infield near the halfway point.

Billy Moyer, winner of the series opener Thursday in Kankakee, Ill., rolled to victory in the second heat from his pole position. His son and namesake got a poor start and slipped back from his outside front row spot, allowing Shannon Babb to nab the second spot he held throughout the race. Babb finished a half-straightaway behind Moyer. Jimmy Mars rallied from seventh to finish third while Moyer Jr. held off Gregg Satterlee for the final transfer spot in the caution-free prelim.

Fast qualifier and polesitter Brandon Sheppard had his hands full with fellow front-row starter and Illinois youngster Bobby Pierce throughout the race, but Sheppard fought off repeated challenges for the victory. Sheppard mostly worked the low groove while Pierce drove low in turns one and two in the first half of the race. Both pulled away from third-finishing A.J. Diemel while Jason Krohn, in a new Club 29 Race Car, got the fourth and final transfer spot. Lance Matthees retired on the eight lap.

Sheppard will start on the pole of the first of four heat races. Other heat race polesitters: Billy Moyer of Batesville, Ark., track record-holder Jason Rauen of Farley, Iowa, and Brian Birkhofer of Muscatine, Iowa.

The top four finishers from each of four heat races transfer to the main event along with four drivers from a B-main. Two provisionals will round out the 22-car field.

Action is under way Friday at Cedar Lake Speedway for the first of two nights of UMP DIRTcar Summernationals during The Masters weekend at the 3/8-mile oval. Competitors battle for $5,000-to-win Friday and $10,000-to-win Saturday.

If there are 32 or more cars, the series has switched to a format similar by its big brother World of Outlaws Late Model Series by splitting the field in half and drawing two heat races apiece from each group. Drivers transferring from the first two heats in positions 2-4 will fill the inside lane of the feature lineup while drivers transferring from the second two heats in positions 2-4 will fill the outside lane of the feature lineup. Heat winners will redraw to set the first two rows of the feature. … If there are 31 cars or fewer, the series will stick with a three-heat format … Bobby Pierce’s No. 32 showed a huge plume of smoke in hot laps, but he stuck with the car for qualifying.