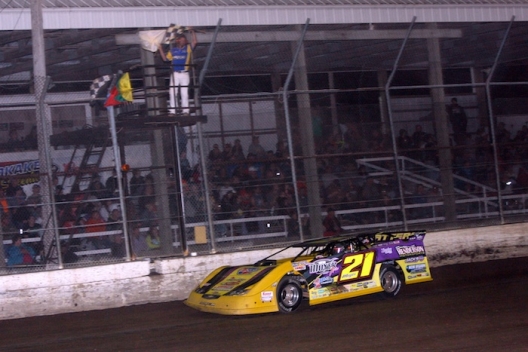 Indeed the Hall of Fame racer from Batesville, Ark., continued his career domination on the tour at the third-mile oval Thursday to capture $5,000 on the tour’s opening night.

Not only did the polesitting Moyer notch an unprecedented eighth series victory at Kankakee, his 83rd career victory on the series knotted him with Shannon Babb of Moweaqua, Ill., atop the tour’s all-time victory list. Babb had overtaken Moyer last season in a series makeup event at Highland (Ill.) Speedway.

Moyer’s namesake son, Billy Moyer Jr., jumped into the lead from outside the front row and led the first eight laps, but the younger Moyer's power steering began to fail. His father took advantage to pull even down the backstretch on the ninth lap, then slid in front of his son in turn three to take a lead he’d never give up.

The younger Moyer retired with broken power steering pump a few laps later and fourth-starting Ryan Unzicker of El Paso, lll., ran second the rest of the way, chasing Moyer in the high groove but never challenging the winner

The first of two cautions appeared on the fourth lap when provisional starter Torin Mettille climbed the turn-four wall and ground to a halt; his car was towed off the track.

The second appeared on lap 26 when Jason McBride shredded a right-rear tire just in front of the leaders. He was able to keep control but slowed to draw a yellow.

Kankakee’s event marked the series opener after Wednesday’s rainout at Brownstown (Ind.) Speedway. No makeup date has been announced for Brownstown.

Jason McBride jumped to the lead from outside the front row and held off repeated challenges from polesitter Brandon Sheppard in the 12-lapper. Fifth-starting Shannon Babb got the third and final transfer spot in the caution-free affair.

Outside front-row starter Billy Moyer Jr. got an excellent start on polesitter Jay Morris and cruised to a victory, matching his father's feat in the previous prelim. Morris drew close to Moyer before the halfway point, but slipped back when he got nearly sideways off turn two on the fourth lap. Morris got the second spot a straightaway back with Frank Heckenast Jr. in third. Kevin Weaver and Shawn Toczek got the final transfer spots in the caution-free prelim.

Fast qualifier and polesitter Billy Moyer grabbed a victory in the second 10-lap heat despite a couple of tense moments exiting the turn-two cushion. Moyer appeared to nearly slip over the banking on the fourth lap, but he kept runner-up Jason Feger at bay all the way. Brian Shirley was third while Scott Schmitt fourth, and Scott Bull was a distant fifth in the final transfer spot. Former Kankakee series winner Shannon Babb was seventh. Gary Christian slowed at the top of the backstretch to draw a lap-three yellow and his C.J. Rayburn house car was pushed off the track.

Under a rainbow over turns one and two, outside front-row starter Mike Spatola roared to a victory in the first prelim. Polesitter Rick Eckert slipped back to third early and couldn't keep up with Spatola and runner-up Ryan Unzicker. Gregg Satterlee finished hot on Eckert's heels in fourth and Bobby Pierce got the final transfer spot. The race's lone caution flew on the eighth lap.

Billy Moyer of Batesville, Ark., a seven-time Summernationals winner at Kankakee County Speedway, showed why in Thursday’s qualifying with a 13.489-second lap to top 31 qualifiers.

The top five finishers from each of three heats will transfer to the main event along with three drivers from a consolation race. Four provisional starters, based on last year, will round out the 22-car field.

Kankakee County Speedway is set to host the opening night of the UMP DIRTcar Summernationals on Thursday after the previous day’s rainout at Brownstown (Ind.) Speedway. The Country Chevrolet 40 pays $5,000-to-win at the third-mile oval.

Thirty-one entrants are entered for the opening event at the track where Bobby Pierce of Oakwood, Ill., won last year’s series event. Other previous series winners at Kankakee on hand include Shannon Babb of Moweaqua, Ill., Mike Spatola of Manhattan, Ill., and Billy Moyer of Batesville, Ark.

Brief sprinkling rain hit the track before 3:30 p.m with some unsettled skies, but all systems are go at the Tom Smith-promoted oval. The Late Model portion of the program includes three groups of time trials, three heat races (top five transfer), a consolation race (three transfer) and main event (a 22-car field with four provisionals).

Jason Riggs had a flipping accident in turn four coming to green for time trials; he climbed from the car without help and appeared to be unhurt. ... Jason Feger's team performed an engine swap after hot laps. ... The generator on Bobby Pierce hauler gave up the ghost inopportunely at the start of the tour. “When your generator goes out on Night One you know it’s going to be a bad one,” his mother Angie Pierce told Steve Lance Jr., who is pitted next to Pierce. … Kevin Cole of Christopher, Ill., is fielding the No. 33 of Steve Lampley of Benton, Ill.; Cole finished third in the Barry Wright Race Car last week at Tri-City Speedway in Granite City, Ill. … Gary Christian of Broken Bow, Okla., is debuting the C.J. Rayburn Race Cars house car, a brand new 2014 model from the Hall of Famer chassis builder of Whiteland, Ind. … Shawn Toczek of Hebron, Ind., is piloting Alan Gendusa’s No. 42a. ... Kankakee's track record is 13.413 seconds set by Kevin Weaver on April 20, 2007.