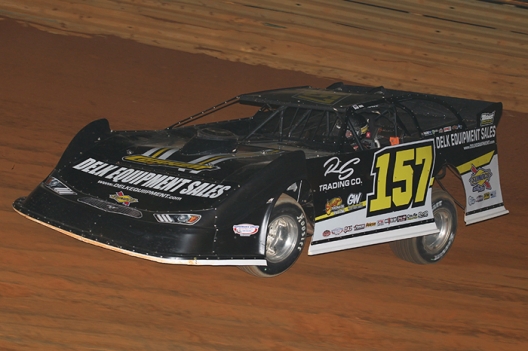 Diving low in turn two as Chilton stayed in his preferred high groove, Marlar used a slide job exiting turn four to snatch the lead away. He then turned back Chilton’s advances over the next lap to secure the lead for good and went on to win the Scott Sexton Memorial at Volunteer Speedway in Bulls Gap, Tenn.

Leading the final 37 laps of the caution-free race, Marlar earned $10,052 in collecting his series-leading sixth Schaeffer Oil Spring Nationals victory of his career.

Chris Madden of Gray Court, S.C., slid under Chilton on lap 30 and held on to finish second, while Dale McDowell of Chickamauga, Ga., charged from ninth to finish third and Jimmy Owens of Newport, Tenn., finished fourth. Chilton of Salvisa, Ky., slipped back to finish fifth after starting on the front row and leading the first 15 laps.

“Michael was doing an awesome job,” said Marlar. “He was doing a great job there. His car was just a little bit too free for that traffic and that’s where I was able to get by.”

The win was Marlar’s first on the tour since May 28, 2016 at Dixie Speedway in Woodstock, Ga., and his second Spring National’s victory at Volunteer Speedway. He credited his speed to his team’s extra practice sessions earlier in the week.

“We got to go do a little testing this week,” Marlar said. “It’s the first time we went and it paid off. The car run real well. This whole deal’s a team effort. The car’s important … and the poeple. It’s always the people. That’s the main thing. (If you’ve) got good people and good cars you can win some races.”

Madden, who was able to make the trip to Bulls Gap following a weekend washout on the World of Outlaws Craftsman Late Model Series, was denied his third Spring Nationals victory at Volunteer Speedway. The fourth-starting Madden repeatedly worked the middle to the bottom of the track in an effort to get by Chilton, but it took awhile to do so.

“We had a good race car. I raced Chilton right there for second probably a little longer than I should have and used up a little more tire,” Madden said. “If I could’ve got on by him a little quicker, I think I could’ve give Mike a run for his money. But we had a good car tonight. I had to just kinda back off of them guys and let my tires cool off and go back again and Mikey had got out there a good ways. Congrats to them guys.”

Madden never had to deal with McDowell. But if the race had been 55 laps rather than 52, there’s a good chance he would’ve. After starting ninth and getting shuffled back to the middle of the field early on, McDowell was on a mission late in the race. Using the low line on the 4/10-mile oval to move forward, he charged to the front in the waning laps. Still riding fifth with five laps remaining, McDowell worked the little-used hub to perfection. He caught Owens and Chilton with two laps remaining and snuck by as they raced toward the checkered flag. The veteran driver was happy with his sixth top-five finish of the season, but a little disappointed that he had to work so hard to get there.

“I let us down a little bit qualifying,” said McDowell. “I just left too much out there … drove a little too easy. The race track’s got a little different characteristic and some of the things that used to not work here was obviously working ‘cause I could see the guys and (they were) aggressive. I feel like I let us down a little bit. Hats off to Mikey. I think I fell back to 13th, (brother and car owner) Shane (McDowell) said at the start. To get back to the top three was good for us. I just need to do a little better.”

Notes: The win was Marlar’s first series victory since last May at Dixie Speedway in Woodstock. Ga. Along with his win at Volunteer on April 16, 2016, other series wins were at Boyd’s Speedway in Ringgold, Ga.; Tri-County Racetrack in Brasstown, N.C.; and Ponderosa Speedway in Junction City, Ky. … Ten cars finished on the lead lap. Sixteen cars were still running at the finish. … Series points leader Brandon Overton of Evans, Ga., made just one lap before pulling into the pits and calling it a night. … Among drivers not qualifying for the feature: Robby Moses, Mark Douglas, Derek Ellis and Zack Dohm. … Previous Scott Sexton Memorial winners include Chris Madden (2013), Brad Neat (2014), Ray Cook (2015) and Ricky Weiss (2016). ... Jason Trammell won the 30-lap Crate Late Model feature. … Jordon Horton won the Sportsman feature.