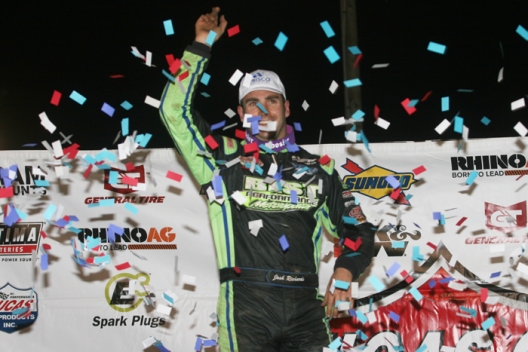 Richards claimed his series-leading third win of the season, but first since winning on Valentine’s Day at East Bay Raceway Park in Gibsonton, Fla. In his seven series races during Georgia-Florida Speedweeks, Richards notched two wins while recording an average finish of 4.3 in his Best Performance Motorsports-backed Rocket Chassis.

Since then however, Richards has an average finish of 7.8 over six series races and has finished outside the top 10 three times. His 15th-place finish at Atomic Speedway in Alma, Ohio, on Thursday night — combined with Tim McCreadie’s fifth-place finish — resulted in McCreadie, of Watertown, N.Y., leapfrogging Richards in the Lucas Oil standings as McCreadie moved up to second and Richards slipped to third.

Friday’s win was a solid rebound for Richards, however, who finished first ahead of polesitter Brandon Sheppard of New Berlin, Ill., and Satterlee of Indiana, Pa. Devin Moran of Dresdon, Ohio, was fourth, with Jimmy Owens of Newport, Tenn., completing the top five.

“The team’s been working really hard. This tire rule has us off balance a little bit for sure, especially when we went down south,” said Richards. “Last night (at Atomic Speedway) we were pretty good really and just had bad luck with a flat tire. The team’s been working really hard and that’s all I can ask for. We’re just trying to work to get better each and every day.”

In winning the first-ever Lucas Oil series race at Sharon Speedway, not only did Richards get out of a mini slump and earn $10,000 for the Steel Valley 50 triumph, he also proved his mettle on a less-than-forgiving race track.

“The track guys did a great job trying to get it rolled in for us. They got so much rain … and the new surface … they just didn’t have time to get it worked in,” he said. “It was what it was. We’ve certainly seen a lot worse.

“I knew it was going to be important to get up front early. We were able to get the lead early when the track was smooth. Then we could try to move around and go where we needed to. But that was a lot harder than what I thought it was gonna be … just trying to avoid some of the spots. I’d find a good spot and it’d be good for awhile and then a hole would start and you’d have to move around a little bit.”

Third-starting Richards used a power move around the bottom of the track to wrestle the lead away from Scott Bloomquist of Mooresburg, Tenn., on lap four. Richards then had to fend off challenges from Sheppard before turning back Satterlee. Once Satterlee moved past Sheppard for second, he quickly trekked down the race leader. Satterlee managed to pull even with Richards on laps 16 and 17, but he could never nose ahead.

After battling with Richards and Sheppard for the lead in the second half of the race, Satterlee had to overcome a terrible restart with 17 laps remaining to salvage third place. He fell back to fifth before rallying back past Owens and Moran.

“I chose the top on that last restart and hung myself out and really kinda gave up any opportunity I had to win the race,” said Satterlee. “But Josh was really good. I’d keep up with him, but he was gonna have to make a mistake I think for me to get by him and he really wasn’t screwin’ up.

“I chose the bottom on all the restarts prior and Brandon got a really good restart from the top and I thought if I could get a run on Josh … but he just started out way too far on the racetrack and just kinda pinned me up there and I just couldn’t really get going. I just kinda made a mistake and put myself in a bad position.”

With a dozen laps remaining Satterlee was back to third, but he couldn’t catch Sheppard. Sheppard had to rally as well. After starting from the pole, he slipped back to sixth before charging back to the front.

“We changed a little bit of stuff from the heat race to try to get better for the rough and we just made a little bit of a bad decision,” said Sheppard. “We were there late. Just early in the feature we weren’t as good. A few other things go our way, we probably could’ve won, but congratulations to Josh. He did a really good job.”

Notes: Richards had gone five races since his last win, which was March 24 at LaSalle (Ill.) Speedway. While it wasn’t necessarily a drought, by Josh Richards’s standards, it was at least a little dry spell. His longest such streak last year was a six-race stretch that spanned the first two weeks of September. … The race was slowed by four cautions. On lap 15, Bloomquist slowed. On lap 18, Hudson O'Neal pulled to a stop in turn two. On lap 28, third-running Timothy Cup slowed with an apparent engine failure. The final yellow flag flew on lap 33 for Chub Frank, who slowed with a flat tire. … Seven of the 24 starters finished the event. ... The race marked the beginning of Sharon Speedway's 88th season. … During the offseason, 140 loads of fresh red clay were hauled in to help widen the racing surface. … Track workers took nearly 90 minutes to rework the track surface before the main event. … Because of the adverse conditions competing drivers were awarded show-up points. Before the feature, after a unanimous vote by the top 14 in Lucas Oil championship standings, it was decided to award 100 show-up points to the entire field.