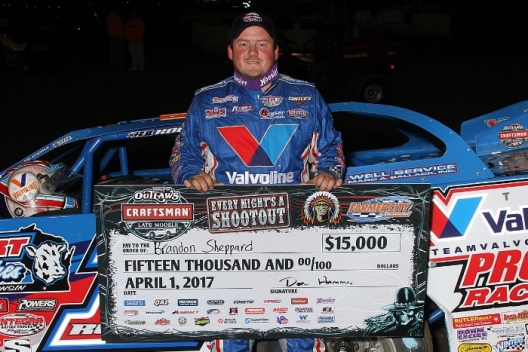 With the New Berlin, Ill., driver and the West Virginia-based powerhouse team reuniting in 2017, is it any wonder the famed blue No. 1 car found victory lane Saturday?

In 75 caution-free laps of swirling action at Farmer City's quarter-mile oval, Sheppard never allowed a serious challenger in racing to a $15,000 Illini 100 victory that made him the season’s first two-time winner on the World of Outlaws Craftsman Late Model Series.

The victory was a thriller for the 24-year-old Sheppard and his rabid fans.

“It’s huge for me,” said Sheppard, who started on the pole and took the checkers 1.315 seconds ahead of fellow front-row starter Brian Shirley of Chatham, Ill. “It just means a lot for me to win here just because it’s so close to home and all my friends and family get to come and watch. It used to be they’d get to watch every week, but anymore we travel so much that nobody gets to watch anymore. It means a lot to get a win here.”

Shirley, who slipped back to fourth early, moved into second for the final eight laps but wouldn’t mount a winning challenge after dropping Billy Moyer of Batesville, Ark., to third. Eighth-starting Devin Moran of Dresden, Ohio — who outran Sheppard in the night’s opening heat race — took fourth on the 66th lap from fifth-finishing Shannon Babb, who rallied into contention from his 14th starting spot.

Sheppard led comfortably most of Saturday’s main event, edging back away when Moyer closed in on lap 36 and again on lap 53 as they battled through race-long traffic. Shirley’s last bid fell short as the winner felt like he had the car to turn back any challengers.

“(Crew members) were telling me that I had a pretty good lead for some of the race there, so I was kind of riding, trying to keep the tires underneath of me,” said Sheppard, the 2015 Illini 100 winner in his family-owned equipment. “Banging the cushion like that is usually hard on tires, so I was just trying to keep them underneath of me, and I knew that, if anybody showed me a nose or anything, that I had a lot tire left, that I could really get up there and start ripping if I needed to. They said Shirley got close to me there at the end.

“I’ve made a few laps at this track, so I’ve got a pretty good idea how to run that cushion when it’s like that. It helps to have a lot of laps here on that … a lot of guys like to bend into the cushion in (turns) three and four, where I, especially there in the feature, I was trying to drive straight to it and then fuel through it just so I could keep the tires underneath of me, and I think that was key to being able to maintain a steady pace throughout the race.”

Shirley was surprised he fell back early, and surprised the field was able to manage 75 laps without a caution on a track that’d been soaked by rain.

“It was just one of them deals where, realistically, I never would’ve believed we’d go 75 laps without a caution,” Shirley said. “(Leaders) never really had to worry about refiring or firing their tires. My tire really didn’t fire that well. I actually fell back at first … I was really shocked at first, and then as the race went on, we was able to get the tire fired up and moved around a little bit and was able to get up there and make it at least a little bit exciting — I would’ve have like to have made it a little more exciting.”

Shirley, driving with support from Arnie Ranta and Bob Cullen, knows keeping up in the Sheppard and the series-leading Mark Richards Racing operations of Rocket Chassis is always a challenge.

“It’s hard to beat Mark and them … I definitely feel like our team is trying its best to compete with them, and I’m pretty proud to be where I’m at.”

Until falling behind Shirley late, Moyer, a multiple-time Illini 100 winner, appeared to have the best chance at Sheppard. But even with both drivers switching grooves and dealing with frequent lapped traffic, Moyer never found an opening.

“I made time up there a couple of times there,” Moyer said. “I could follow him there and kind of run the same laps around the top, but I felt like I was a little bit better on the bottom early, especially. I don’t know, there’s just so much traffic out there.

“That kind of decided it … it kind of fell in my favor (then) his favor, back and forth. There wasn’t a whole lot of racing room when I’d get there. There was always cars around us where I couldn’t do much.”

Sheppard will gun for a weekend sweep Sunday at Farmer City with a $6,000-to-win World of Outlaws payday on the line, a race postponed from Friday because of heavy rain earlier in the week. Sheppard believes his team still has room to grow after he replaced four-time WoO champion Josh Richards during the off-season.

“We’re still kind of learning stuff for me, too,” he said. “Every track we go to I’m just a little bit different than what Josh was last year just going off the notes, so it’s definitely a little bit of a learning curve, but we just keep getting better and better every week.”