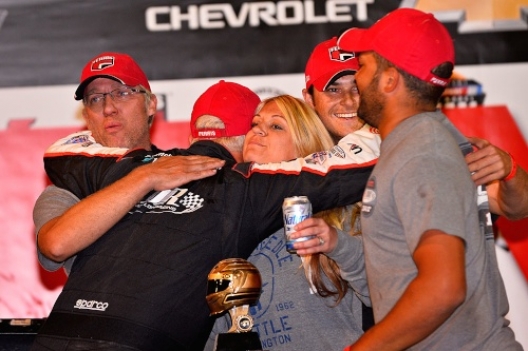 Nine years after inheriting a triumph in the prestigious World 100 that left him feeling less than satisfied, the 48-year-old veteran captured the famed half-mile oval’s other, richer crown-jewel event with a convincing drive to the checkered flag in the Dream XX presented by Ferris Mowers.

McDowell stormed forward from the 22nd starting spot to grab the lead from six-time Dream champion Scott Bloomquist of Mooresburg, Tenn., on lap 79 and never looked back en route to claiming the $100,000 first-place prize.

“Thanks goodness that I made it to victory lane,” said the relieved McDowell, who has been pursuing a full-fledged party on Eldora’s grand stage since his tempered World 100 post-race. “I won the World in 2005, but Shannon Babb actually won it. I just was the recipient of his misfortune (Babb was disqualified for being 10 pounds light), so it feels great to be able to celebrate in victory lane.”

McDowell was never challenged once in command. He steered his Team Dillon Racing Warrior car across the finish line with a half-straightaway edge over defending World 100 winner John Blankenship of Williamson, W.Va., who charged from the 24th starting spot to take the $20,000 runner-up payoff.

McDowell failed to transfer through a heat race on Saturday night, pulling back his high hopes coming off a win in one of the previous evening’s 25-lap preliminary features. He came back to top a B-Main but still wasn’t overly confident about his chances.

“I’m lost for words,” said McDowell, whose best previous finish in 11 previous Dream feature starts was third in 2010. “We didn’t do well in the heat race — I’m just no damn good up on the cushion (that was dominant during qualifying) — and we started 22nd, so I really didn’t have expectations of getting to the front. Honest to God I didn’t.

“But shoot, it was just our turn tonight — finally.”

McDowell got rolling in the fast and furious 100-lapper, cracking the top 10 just after the race’s first caution flag flew on lap 32 for Ryan Gustin of Marshalltown, Iowa, stopping on the inside of turn one. He found himself in a battle for fifth by lap 55 and vaulted up to third on lap 60 when Don O’Neal of Martinsville, Ind., and Jonathan Davenport of Blairsville, Ga., tangled and spun between turns three and four while racing for position with McDowell.

Then, after the race restarted for the final time on the 60th circuit, McDowell took second place from Carrier and chased after Bloomquist. He made his deciding move on lap 79, working the inside lane off turn two to snatch the top spot for good.

“Scott was searching around too,” McDowell said of Bloomquist. “I seen him running the middle, running the top, running the bottom. It’s a lot easier to run second than it is to sit out there and lead, so I would actually move around and see where I gained on him. He drove away from me on the (lap-60) restart, so I kept moving around searching and I got to where I could get to him.

“But getting to somebody like that and passing them is two different things, so when I got there I just tried to go where he wasn’t. I had to make myself calm down because one time down the backstraightaway I buzzed the tires a little bit so I was talking to myself, ‘All right now dummy, slow down a little bit.’”

Once in front, McDowell relied on his crew-chief brother Shane to direct him to the optimum line around the high-banked track.

“There late in the race I could run top and bottom but I didn’t know where I needed to be,” McDowell said. “This racetrack was flawless. You could race all over it, but you just can’t feel the speed in the seat, so my brother Shane was down there giving me hand signals and I was trying to look for him and see what was going on.

“Man, them last 15 laps, I looked up on the board and I didn’t think they were ever gonna click off.”

McDowell held on to become the sixth driver to win both of Eldora’s crown-jewel events, joining Bloomquist, Moyer, Owens, Donnie Moran of Dresden, Ohio, and Shane Clanton of Zebulon, Ga. But in the final analysis, McDowell felt like he was a big-race winner at the Big E for the first time in his three-decade-old career.

“Realistically, it takes a load off my shoulders,” McDowell said of his triumph. “It’s just a situation where the race that we inherited (in ’05) I felt bad when I was at my truck and they come over and told me that Shannon was light. You take a win like that because you worked hard and you put yourself in position to be the first recipient of somebody’s bad fortune, but to be able to win it tonight — to drive up through there and pass my way up through there and earn it — it really felt great.”

Behind McDowell, Blankenship, 32, broke into second place with a lap-84 pass of Bloomquist. He appeared to be catching McDowell for a short time before gradually losing ground in the closing laps.

“I had a great car and I was just pushing it a little hard at the end,” said Blankenship, who matched his career-best Dream finish of second in 2012. “I was hoping he’d get hung up and stuck on the track a little bit with those lapped cars, but that was really the only shot I had. I kind of ran out of race car.

“Either way, hat’s off to my crew. I ran into the wall twice this week and tore it up, and they did an excellent job getting it back together.”

The 50-year-old Bloomquist pushed forward from the fifth starting spot to take the lead from Carrier on lap 33, but he couldn’t stay in front over the remaining distance to become the first driver in the Dream’s 20-year history to win the race in consecutive years.

“It looks like we just had some tire-size issues,” said Bloomquist, who made his 18th career start in a Dream A-Main. “It’s our fault. I didn’t have the stagger we needed, so I had to shear the car to turn it and that caused the tires to give up on us some.

“We really felt like we had the car to beat but we just kind of beat ourselves tonight. But congratulations to Dale and all that bunch — he looked like he was pretty good there, and that’s all we had at the end.”

Notes: McDowell, who started the Dream A-Main for the seventh consecutive year, said his Dirt Late Model operation falls under the Team Dillon umbrella — former NASCAR racer Mike Dillon and his sons Austin, a Sprint Cup Series rookie, and Ty, a Nationwide Series regular — but is owned by the Dillon brothers’ grandfather, NASCAR team owner Richard Childress. … McDowell’s victory was his fifth in his last six starts and gave him six wins in 14 starts overall this season. … Davenport was on the move when his hopes were effectively dashed by his lap-60 tangle with O’Neal. The NDRL points leader tossed his K&L Rumley machine around the extreme outside of the track to advance from the 21st starting spot to the top five in just over half the distance. He returned to the race after his spin and climbed back up to eighth before retiring. … Jeep VanWormer of Pinconning, Mich., started from the pole position but was never a factor. He dropped out of the top five by the race’s one-quarter mark and finished ninth. … The Dream’s $100,000 winner's purse is the richest in Dirt Late Model racing. The weekend’s total purse was $306,625. ... Saturday’s heat race lineups were set using drivers’ best time-trial effort from Thursday and Friday; the top five in each heat were inverted. … First-time Dream A-Main starters were Gustin, Jason Hughes of Westville, Okla., and Jason Riggs of Harrisburg, Ill. … Illinois was the home of the most Dream feature starters (4). Pennsylvania, Georgia, Kentucky and Tennessee claimed three drivers apiece; Arkansas, West Virginia and Iowa had two representatives; and Michigan, West Virginia, Indiana, Oklahoma, South Carolina and Ohio each had one driver. … A total of 13 cars in the A-Main field were Rockets. Other chassis builders represented included Bloomquist (4), Longhorn (3), Club 29 (3), Barry Wright (2), Warrior (1), Hustler (1) and Capital (1).