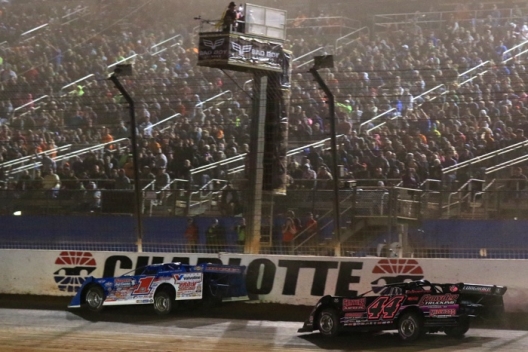 CONCORD, N.C. (Oct. 28) — Just when it seemed like Josh Richards of Shinnston, W.Va., would have to take another shot at breaking the World of Outlaws Craftsman Late Model Series single-season win record on Saturday night, he came alive at The Dirt Track at Charlotte.

Using a late-race restart to his advantage, Richards charged around the top of the 4/10-mile oval, pulling alongside race leader Chris Madden of Gray Court, S.C., on lap 45 of 50. Edging ahead one lap later, Richards led the final circuits to capture his 18th series victory of the season in the Friday edition of the 10th annual Bad Boy Off Road World Finals.

“I just love racing here,” Richards said in victory lane. “We’ve had a phenomenal season. I knew we were going to have this today and tomorrow and then we were off for the winter, so I wanted to give it all I had and see if we could do it.

“Chris (Madden) ran a really good race and I was a little too free most of race. I thought we settled in there for second or third. I thought if we just try something, make it or break it, we didn’t have anything to lose. It worked out."

Starting outside the front row, Madden shot to the front of the field at the drop of the green flag, taking an early lead over Richards. As the field entered lapped traffic on the ninth circuit, Richards began reeling in the race leader, only to have his efforts thwarted when the race’s first yellow flag waved on lap 17.

While Madden maintained his lead, third-starting Darrell Lanigan of Union, Ky., slipped past Richards to claim the second-place spot on the restart. The pair battled side-by-side around the halfway mark, with Richards regaining the runner-up spot on lap 36. The Rocket Chassis house car driver would again set his sights on Madden, with the field slowed by another yellow flag on lap 45.

But the race's final caution worked in Richard's favor, as the series points leader used the momentum from the restart to overtake Madden in the final laps for his 76th career World of Outlaws victory. He earned a $12,000 payday.

Madden held on to finish runner-up at the checkers, with Lanigan rounding out the podium in third. Charging from the 20th starting position, Brandon Overton of Appling, Ga., finished fourth, with Shane Clanton of Zebulon, Ga., rounding out the top five.

“We weren’t real good in (turns) three and four the whole night,” Madden said after the race. “We were just trying to manage down there. We could hold our own in (turns) one and two. (Richards) just put himself in a position to get by me down there and got the win. We’ll come back tomorrow and be stronger."

Lanigan, a former World Finals winner at The Dirt Track, was pleased with his podium finish.

“It was a hell of a race there at the end,” Lanigan said. “We had a pretty good car there in the middle of the race and we got a little loose there coming off toward the end and Josh (Richards) got by me on that restart. But hats off to those guys. We’ll come back tomorrow night and see if we can’t get something."

Notes: Along with setting a new WoO single-season win record, Richards scored his 27th victory of the 2016 season. The race marked his first World Finals triumph since 2013. ... The feature was slowed by four cautions. … The first yellow flag waved on lap 17 when Tyler Carpenter slowed in turns one and two. … Billy Moyer Jr. slowed on the frontstretch to draw a caution on lap 25. … A yellow flag flew on lap 39 when Tyler Erb dropped off the pace in turn four. … Frank Heckenast Jr. spun in turn four to draw a caution on lap 41.

Steve Francis took an early lead, as Jonathan Davenport began working his way from the ninth starting position and in to the fourth-place spot at the halfway mark. Never seriously challenged, Francis won the third consolation, with Ross Bailes taking the second and final feature transfer spot. Despite his late race attempts, Davenport settled for a fourth-place finish behind Mason Zeigler.

Polesitter Brandon Overton jumped to an early lead, as fourth-starting Don O’Neal began reeling in second-starting Nick Hoffman. As the race reached the halfway mark, the top two began pulling away from the field, with Hoffman challenging Overton for the race lead. Overton fought off Hoffman to win the consolation, with Hoffman running second to transfer to the feature.

Working around the bottom of the racetrack, polesitter Eric Wells pulled ahead to take an early lead. With G.R. Smith running in the second spot, Steven Roberts and Russell Erwin raced side-by-side for third, with Roberts pulling ahead at the halfway mark. His sights set on Smith and the second-place spot, third-running Roberts spun in turn four to draw a caution on lap nine. Wells won the consolation, with Dale Hollidge using the restart to his advantage to overtake Smith for the second and final transfer spot.

Front row starters Darrell Lanigan and Jesse Stovall pulled away in the early running, as Morgan Bagley improved from the sixth starting spot to run third. Lanigan stretched his lead at the halfway mark, as Ross Bailes join the battle for the final transfer spot. Lanigan won the sixth heat, with Stovall pulling ahead of Bagley to run second at the checkers after a tight side-by-side battle for the lead. Bagley earned the final transfer spot.

Polesitter Dale McDowell led the opening lap, as Mason Zeigler and Chase Junghans shot ahead of front row starter Jason Covert to battle for the runner-up spot. Getting a shaky start, Jonathan Davenport drove through the infield grass in turns three and four, slipping back to the tail of the field in the early running. At the halfway mark, McDowell and Junghans separated themselves from the field, finishing one-two at the checkers. Covert grabbed the third and final transfer spot.

Shooting to the front of the field as the green flag waved, polesitter Josh Richards took an early lead, with third-starting Rick Eckert pulling ahead of outside polesitter Don O’Neal to run second. A tight battle ensued between O’Neal and fourth-starting Tyler Carpenter for the third-place spot, as the pair raced side-by-side, swapping the position before Carpenter pulled away. A yellow flag waved on lap eight when Willie Milliken slowed against the turns three and four wall. Pulling away on the restart, Richards won the fourth heat, with Eckert finishing second. Carpenter finished third to transfer to the feature.

Polesitter Shane Clanton led the opening lap, as a three-car battle ensued for the third-place spot, forcing outside polesitter Donny Schatz back to the fifth position. With Clanton cruising over the field, a yellow flag flew on lap six when Tyler Erb made contact with the turn four wall. Never seriously challenged, Clanton picked up the heat race win, with Billy Moyer Jr. finishing runner-up. Steve Casebolt edged ahead of Brandon Overton at the line to take the third and final transfer spot.

Polesitter Chris Madden began stretching his lead in the early running, as third-starting Frank Heckenast Jr. challenged outside polesitter Austin Smith for the second-place spot. A yellow flag waved on the second lap for debris on the racetrack. Madden held his lead as the race went back green, with Donald Bradsher briefly pulling ahead of Heckenast to run third. Madden grabbed the heat race win, with Smith finishing second. Regaining the third-place spot, Heckenast transfers to the feature.

Charging to the front of the field at the drop of the green flag, polesitter Tim McCreadie took an early lead, as third-starting Dennis Erb Jr. slipped past front row starter Dale Hollidge to grab the second-place spot. McCreadie began distancing himself from the field, with as much as a straightaway lead at the halfway mark. He picked up the heat race win, with Erb finishing second. Fourth-starting Chris Ferguson grabbed the final transfer spot.

Looking for a favorite this weekend? Consider the fact that at least one driver has won a World Finals heat race on both Friday and Saturday nights in every previous season of the event’s existence. … Heat 2 polesitter Chris Madden of Gray Court, S.C., has won four straight World Finals heat races and five of his last six, but he’s never captured a feature during the World Finals. He has victories in non-World Finals events, however. … Heat 3 polesitter Shane Clanton of Zebulon, Ga., heads into Friday’s action as one of the happiest drivers in the pit area. “I was a tenth (of a second) off the pole (fastest qualifier) in both rounds (of time trials),” Clanton said. “You don’t know how good that is for me. You know how bad I’ve been here on a racetrack like that? I usually need a two-foot cushion to be any good here.” … Dustin Mitchell of Princeton, N.C., had to park his own machine due to a broken valve suffered during Thursday night’s qualifying, but he will race tonight in Justin Williams’s backup machine. … Jeremy Miller of Gettysburg, Pa., is scratched from competition after suffering terminal engine failure on Thursday night is his Wylie-built MBH house car. MBH’s Billy Vacek initially thought a broken transmission had caused Miller’s rear wheels to lock up and send him into the turn-three wall during first-round qualifying, but after changing the tranny the team couldn’t get the car in gear and realized that it was the motor that had locked up.

The Bad Boy Off Road World Finals continues on Friday at the The Dirt Track at Charlotte with the first of two World of Outlaws Craftsman Late Model Series weekend events. The 50-lap feature pays $12,000-to-win.

The heat race lineups for Friday’s program were determined through Thursday’s first round of qualifying. Fast qualifiers Tim McCreadie of Watertown, N.Y., and Josh Richards of Shinnston, W.Va., will be the polesitters for the first and fourth heat races, respectively. The top three from each of the evening's six heat will transfer to the night’s main event.

Friday’s program will also include three consolation races that will set the remainder of the feature field. Along with Late Models, big-block modifieds and World of Outlaws Sprint Cars will be in action. DirtonDirt.com is offering live pay-per-view coverage of the event.