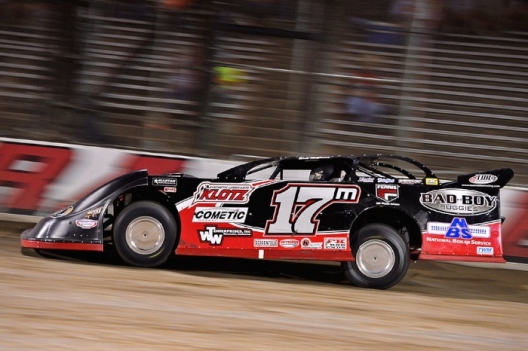 But when a caution flew with two laps remaining in Friday’s second preliminary feature during the weekend for Dream XX by Ferris Mowers, the 48-year-old McDowell knew his work wasn’t quite done with Lanigan restarting alongside.

“I was like, 'Are you kidding me?' A caution with two laps to go and Darrell as good as he is here?,” McDowell said. “I picked the bottom and just hoped there was enough traction maybe to get the jump on him, and just drive in the corner deeper.”

Going against conventional wisdom, McDowell’s inside-lane choice for the lap-23 restart paid off as he kept Lanigan in check the final two laps for a $5,000 victory that establishes McDowell as among the favorites in Saturday’s $100,000-to-win program.

“Everything was good, everything turned out. It was our night. I hope it’s our night tomorrow night.”

Lanigan, the 2003 Dream winner who led the first 13 laps, settled for second with polesitter Jason Feger of Bloomington, Ill., in third on the second of three nights of UMP DIRTcar-sanctioned Late Model action at the legendary half-mile oval. Scott Bloomquist of Mooresburg, Tenn., improved six positions to finish fourth and Chris Madden of Gray Court, S.C., rounded out the top five.

Lanigan grabbed the lead from Feger at the outset and set sail with McDowell quickly working his way into second. When the frontrunners reached lapped traffic by halfway, McDowell drew closer to Lanigan and made the winning pass on the backstretch.

Ready for the checkered flag, McDowell’s victory was delayed when 10th-running Jason Riggs of Harrisburg, Ill., spun in turn four.

Lanigan licked his chops in lining up outside McDowell when the green flag reappeared, but McDowell beat him into turn one and slid back into the catbird’s seat.

“I really thought when he gave me that outside I could roll it down there,” Lanigan said, “but he got some pretty good digs on that start on the bottom down there and got beside me. He did what he had to do to win it.”

McDowell hopes his Friday performance is a sign of things to come Saturday.

“I think we learned just a few things tonight about the car in the slick,” McDowell said. “I think it’s helping everybody though to be able to run two nights before the big race, so everybody’s got the same advantage. Or, if you’re pretty good, you can dial yourself out. We’re just going to stay baseline with what we’ve been the past couple of nights and hope for the best.”