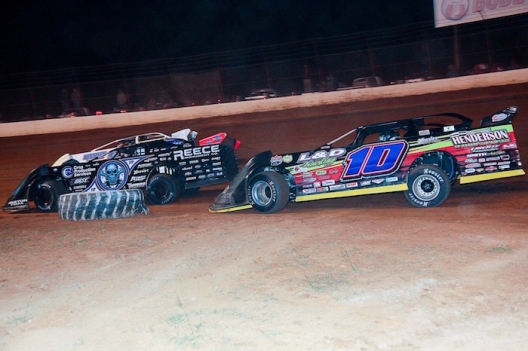 MERIDIAN, Miss. (Oct. 22) — David Breazeale’s eyes got wide with two circuits remaining in Saturday night’s 100-lap Coors Light Fall Classic at Whynot Motorsports Park when the only driver standing between him and victory suddenly fell off the pace.

Then, after the 40-year-old veteran from Four Corners, Miss., glided past the disabled driven by Scott Bloomquist of Mooresburg, Tenn., to assume command as the white flag was displayed and marched on to a $15,000 triumph, he was so overcome by emotion that his mouth almost sealed shut.

When asked to put his win into perspective in the pit area following the race, Breazeale quipped, “Words can’t describe it.”

Indeed, it was a monumental home-state score for Breazeale, who jumped into a No. 10 Billy Moyer Victory Race Car from the stable of his long-time sponsor, Henderson Motorsports, for the weekend because his own Barry Wright-built machine was unavailable for action due to mechanical trouble. He shined on Saturday’s big stage, marching forward from the eighth starting spot to reach second on a lap-51 restart and chase Bloomquist until the Hall of Famer met his untimely demise with the finish in sight.

Bloomquist, 52, appeared headed to his 21st overall victory of 2016 after overtaking Tyler Erb of New Waverly, Texas, for the lead on lap 50, but rearend trouble with two laps to go doomed him. His Sweet-Bloomquist car wiggled off turn four heading to score lap 98 and slowed dramatically, allowing Breazeale to grab the lead moments later on the backstretch — though Bloomquist was able to continue limping around the track to salvage a runner-up finish.

Dane Dacus of Lakeland, Tenn., was too far behind Bloomquist to take advantage of the star’s problem and finished third after starting seventh but fading out of the top 10 early in the race.

The 19-year-old Erb, who came from the 10th starting spot to lead laps 32 and 35-49, finished fourth despite struggling throughout the race’s second half because he tore the left-front fender off his car when he clipped a turn-four uke on lap 51 while running second. Dennis Erb Jr. of Carpentersville, Ill. — no relation to Tyler Erb — completed the top five after starting fourth.

Outside polesitter Billy Moyer of Batesville, Ark., who outgunned front-row mate Bloomquist for the lead at the initial start and paced laps 1-31 and 33-34, experienced trouble after falling from the front of the field and finished 18th.

Breazeale gave the credit for one of the biggest victories of his career to Henderson Motorsports, which stepped up to put him in Whynot’s field one month after he registered an emotional third-place finish in the Magnolia State Cotton Pickin’ 100 at Magnolia Motor Speedway in Columbus, Miss., with his own No. 54.

“We had a part failure and couldn’t get (his own vehicle)  ready for this race,” Breazeale said. “But these (Henderson) guys, they’ve helped me for the last six years. They’ve put the motors in my car, and I felt comfortable getting in their car.

“I just can’t thank Leon (Henderson) and his dad for giving me the opportunity to drive this car and to (chief mechanic) Wayne for setting it up … he crews it and he’s one of the best in the business.”

Breazeale’s car became faster as the race wore on, putting him in position to take advantage of Bloomquist’s misfortune.

“The car started out a little tight,” Breazeale said. “I was worried because we run here last week and we was just really, really tight the whole feature, but we kept moving around and I kept adjusting my line and my pedals, and I think we burned off enough fuel that the tightness eased up in it and it got to where it would circle the bottom. After that it was just about hitting your marks and keep from hitting the uke tires down there (on the inside).”

For Breazeale, the surprising part of his run to the checkered flag was the fact that he stayed close to those marker tire on the inside of the 3/8-mile oval.

“I’m pretty sure everybody knows that I don’t like the bottom,” Breazeale said. “But I’ve seen so many (races) won on the bottom in years past, and I’m getting older (and) I can’t fight the high side like I used to so I just had to make myself learn how to get around it.

“So far this year we’ve had two really good (100-lap) runs — in two different chassis — and wound up with a win here at Whynot, and it’s an awesome feeling.”

Not feeling quite as good after the Fall Classic was Bloomquist, who saw what would have been his seventh victory this season worth $15,000 or more slip through his fingers.

“We had something let go in the rear and we were just having one-wheel drive at the end of the race for the last two laps,” Bloomquist said. “Our car was really erratic (due to the mechanical trouble). I could keep the car rolling, but I think everybody could see it wasn’t capable of going fast anymore.”

Bloomquist was thankful that he at least hung on to to place second.

“There were five cars that went by me and I wasn’t sure who was who, and I thought we ended up sixth,” Bloomquist said. “They said that we were far enough ahead that four of those were lapped cars and we ended up second. It’s a consolation prize I guess.”

Notes: Breazeale recorded his fifth feature win of 2016. He previously captured Mississippi State Championship Challenge Series events in July and August at Mississippi’s Greenville and Jackson ovals and a pair of early-season weekly shows at Magnolia. … Six caution flags slowed the 100-lapper. … A lap-51 caution flag was needed so safety crews could pick up Tyler Erb’s left-front fender, which was ripped off when he hit the turn-four uke tire. His car wasn’t the same after that incident, though he managed to hold onto fourth place. … Mike Marlar won last year’s event but didn’t return to defend his triumph. ... Eric Cooley earned $2,500 for winning Saturday night’s companion Crate Late Model feature.