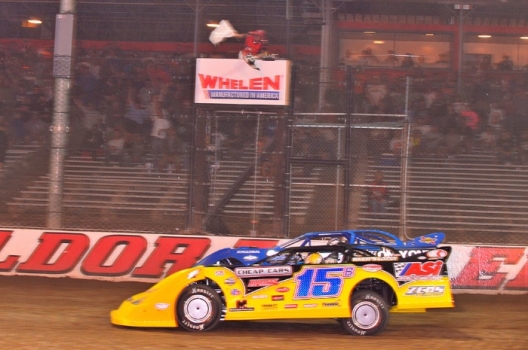 ROSSBURG, Ohio (June 6) — It was almost too close to call. At least without a video replay.

In a thrilling last-lap battle at Eldora Speedway, Brian Birkhofer’s crossover move on Rick Eckert exiting turn four ended with officials ruling Birkhofer the winner by a hair in a photo finish.

Birkhofer collected $5,000 in Friday’s opening preliminary victory while Rick Eckert of York, Pa., disputed the outcome of the 25-lapper that was a thrilling most of the way.

Checking the video replay, it took several minutes for Eldora general manager Roger Slack and race officials to determine Birkhofer was the winner, leaving Eckert disappointed after starting outside the front row and leading 23 of 25 laps.

“You hate to lose them that way,” the 48-year-old York, Pa., driver said, “but that’s the way racing goes sometimes.”

Billy Moyer of Batesville, Ark., who hung with the frontrunners the first half of the race, settled for third-place finish while polesitter Shannon Babb of Moweaqua, Ill., was fourth. Kent Robinson of Bloomington, Ind., one of Thursday’s preliminary feature winners, improved two positions to round out the top five.

Eckert ran the high groove the first half of the race, but decided to drop lower on the track by the halfway mark while Birkhofer tried to chase him down from the high groove.

Birkhofer used momentum exiting turn two to catch Eckert, eventually moving past to take the lead on lap 18. But when Morgan Bagley’s slower car held Birkhofer up down the backstretch on the next lap, Eckert went back ahead and stretched out to a 10-length lead with five laps remaining.

Birkhofer continued his pursuit as the leaders hit another spate of lapped traffic, forcing both drivers to change lanes on the final lap.

First, Birkhofer was held up by a slower Jimmy Mars on the backstretch, allowing Eckert to move ahead in turn three. Then Eckert, too, was held up by the slower Duane Chamberlain’s car in the low groove.

Eckert slid in front of Birkhofer exiting turn four heading for the checkers, but Birkhofer made a crossover move underneath Eckert and — barely — won the drag race to the checkers.

Eckert was unofficially listed as the winner — by two-thousandths of a second — by electronic scoring, and drivers were initially told by one-way radio communication that was the outcome.

But after several minutes of reviewing the video, officials ruled that Birkhofer edged Eckert at the flagstand. Eckert disputed that based on the electronic scoring, but Slack said the track considers all the evidence in making the ruling.

“I got into traffic there and I wasn’t sure how much of a lead I had,” Eckert said. “He slipped by me there one time and then he got boxed in behind a lapped car like I had got boxed in, and then I got back by him. It was a helluva race, but you just hate losing one on the last lap no matter where it’s at – especially at Eldora.”

Birkhofer, his head leaning forward at the checkers, was glad the decision went his way.

“Rick’s a helluva racer,” Birkhofer said. “He did his thing and I tried to do my thing to try and win the race. I honestly thought I had him at the line, but by transponders he had me and by video I got him I guess. I’ll take it.

“Believe me, I’m glad we won $5,000 after getting put into the win, but it’s still about coming out and standing on that stage tomorrow night. I got a race car that I can keep working on and maybe try to win this big race tomorrow night. That’s all I’m thinking about.”