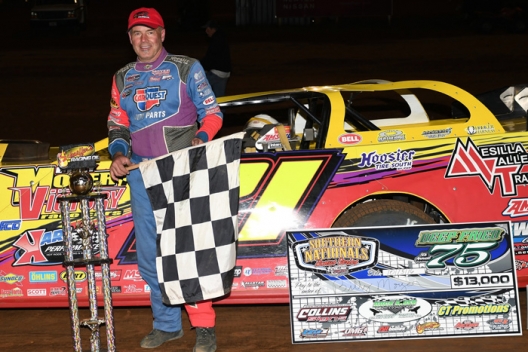 WHEEL, Tenn. – Billy Moyer was far from dominant. But he was fast when he needed to be. Moyer, of Batesville, Ark., slipped by race leader Tanner English following a late-race caution and led the final 10 laps of the Deep Fried 75 Saturday night at Duck River Raceway Park.

English, of Benton, Ky., stayed in Moyer's tracks the final 10 circuits, but after leading a race-high 40 laps, he settled for second. Caleb Ashby, of Cunningham, Tenn., rallied from 18th to finish third in a race filled with attrition. Canadian Ricky Weiss was fourth, while David Payne, of Murphy, N.C., finished fifth after taking a provisional to start the race. Only 10 cars were running at the finish.

En route to a $13,000 payday in the fifth annual event, Moyer showed patience and poise in the grueling 75-lapper around the tiny-but-fast southern Middle Tennessee bullring. Moyer followed English for 20 laps after settling into the runner-up spot on lap 44.

The Hall-of-Famer finally flexed his muscle with 10 to go, when he made his only bid for the lead look relatively easy. Within five laps, Moyer built a comfortable two-second advantage.

“I wore that bottom out in the beginning of the race and he kinda stayed down there. I moved back up in the middle. That's where it was best in the later stages. Then I seen him hit those holes in (turns) three and four and kinda shove up there … just like the lap I passed him.

“I went in the middle and when he pushed up I had that run on him and did that crossover deal and got him. It was hard to pass. There was no ‘Pull up there and pass somebody’ … you had to work for everything. When he did that, it just fell just right for me and I was in position to (pass him).”

English had led from lap 25, when he overtook Georgian Donald McIntosh for the point. The two made contact, which left McIntosh spinning in turn two. McIntosh was sent to the tail while English — who attributed the contact to hard racing — continued on up front. Despite building a lead as large as four seconds, English was never able to get comfortable up front as 10 cautions slowed the pace. At the halfway point, only 12 cars remained on track.

For English, a second-generation racer with lots of wins but still in search of that marquee victory, running second to Moyer wasn't the end of the world.

“When the black streaks came in, my (Hoosier) 1350 on the right front was starting to scoot real hard and I was having to hustle it and it was making me do things that I didn't want to do. It would scoot across that black and kill my drive off the corner because I would have to catch it,” said English.

“All in all, I'm happy with everything. It was a heck of a race and I hope everybody enjoyed it.”

Ashby, meanwhile, continued his outstanding year – he's been dominant at Clarksville (Tenn.) Raceway this season – with a podium finish after rallying through a consolation race. After starting 18th, he cracked the top five with 25 laps remaining. He was up to fourth by lap 52 and inherited third from Brian Shirley on lap 53 when Shirley exited with a broken driveshaft.

Ashby briefly challenged Moyer and English, but fell back in the waning laps.