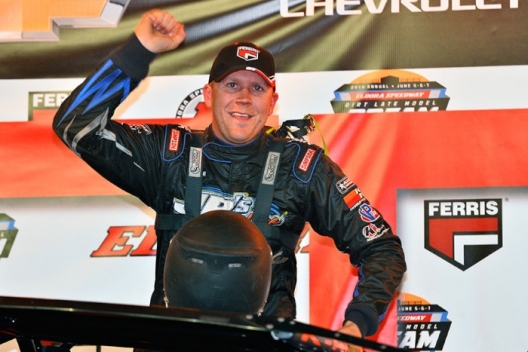 ROSSBURG, Ohio (June 5) — Like many drivers, Kent Robinson of Bloomington, Ind., came to Eldora Speedway looking for his biggest career victory. And while the $100,000-to-win Dream XX presented by Ferris Mowers is still coming up on Saturday, Robinson achieved his feat in one of Thursday’s 25-lappers leading up the the lucrative event.

Other victories just can’t quite stack up for the 27-year-old Robinson, who knows that winning at Eldora is something special.

“Any time you get on the stage here, it’s a big deal,” Robinson said. “It might not have paid the highest (purse) I’ve ever won, but it definitely means the most to me.”

The polesitter jumped into the early lead in the caution-free 25-lapper and built a comfortable half-straightaway margin on second-running Scott Bloomquist of Mooresburg, Tenn., a six-time Dream winner.

But as the frontrunners approached traffic after 10 laps, Robinson’s margin narrowed and it appeared as if Bloomquist might track him down.

Instead, Robinson turned up the wick amid the slower cars, stretching his lead and giving his No. 7r a cushion of three lapped cars as Bloomquist vainly tried to keep up.

“When you get to dirty air, it really makes your car handle different. I knew I had a big lead. I was getting signs, a big enough lead, but I had to press hard enough to get around those guys to put some cars in between me and Scott,” Robinson said. “The car was really maneuverable. Once the tires fired off, it was really good — spot on. I don’t know if it could’ve gotten better, but that’s a good feeling. It makes my job a lot easier.”

Robinson ran unchallenged the rest of the way to take the checkers nearly three seconds ahead of Bloomquist, who started fourth and took the second spot from outside front-row starter Jonathan Davenport on the third lap.

Duane Chamberlain of Richmond, Ind., improved three positions to give the Bill Dues-owned St. Henry Nite Club team its second top five finish of the night. Davenport slipped back to seventh at the finish.