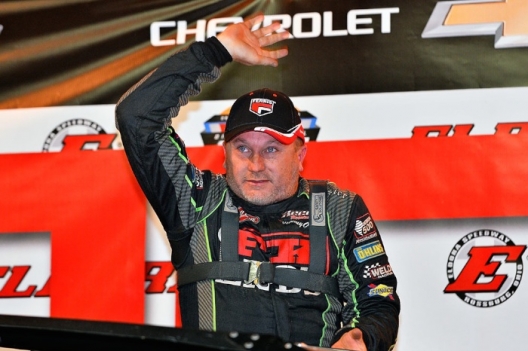 Joey Millard/thesportswire.net
Jimmy Owens emerges victorious from his No. 20 Thursday.
What won the race: Polesitter Jimmy Owens of Newport, Tenn., overtook fellow front-row starter Bobby Pierce of Oakwood, Ill., amid heavy traffic on the 15th circuit and went on to claim a $2,500 victory in Thursday's preliminary feature for odd qualifiers. A late caution with three laps remaining bunched up the field, but Owens was able to pull away for an uncontested victory.
Quotable: “I was just biding my time and waiting,” Owens said, “and then when we got to lapped traffic, he couldn’t maneuver as good as we could.”
Key notes: DirtonDirt.com and Eldora Speedway have teamed up for a live pay-per-view production of this weekend's Dream. ... Click the related story link in the left column for blog-style live updates and results. ... Pierce jumped the lead at the outset and led the first 14 circuits; his No. 32 machine sports a throwback look to father's racing days in the '90s for this weekend's Dream. ... Owens, the 2009 Dream winner, has won four of his last six starts; he has six total victories on the season. ... Heat races ran caution-free. ... The Dream is celebrating it's 20th anniversary. ... In total, $306,625 in purse money is up for grabs this weekend at The Big E; Saturday's winner pockets $100,000. ... Thursday's card boasted two complete racing programs headlined by twin 25-lap, $2,500-to-win preliminary features; the field was divided by even and odd time trial results. ... Kent Robinson of Bloomington, Ind., won the second preliminary feature. ... Ferris Commercial Mowers is the event's presenting sponsor.
On the move: Tim McCreadie of Watertown, N.Y., rallied from 17th to finish 10th after winning a consolation race.
Winner's sponsors: Owens' Mike Reece-owned Club 29 Race Car is powered by a Cornett Racing Engine and carries sponsorship from Edge Services, FK Rod Ends, Midwest Sheet Metal, Red Line Oil, Reece Monument Co. and Sunoco Race Fuels.
Car count: 78
Fast qualifier: Eddie Carrier Jr.
Time: 16.433 seconds
Polesitter: Jimmy Owens
Heat race winners: Jacob Hawkins, Eric Wells, Bobby Pierce, Jimmy Owens
Consolation race winners: Tim McCreadie, Don O'Neal
Next series race: June 6, Eldora Speedway (Rossburg, OH) $5,000
Editor's note: Results and race details are unofficial.
By Kevin Kovac
DirtonDirt.com senior writer

Combining patience with an impeccably handling machine, Owens ran down and passed race-long pacesetter Bobby Pierce of Oakwood, Ill., for the lead on lap 15 and rolled on to capture the 25-lap feature for odd-numbered qualifiers during the first preliminary night of the $100,000-to-win Dream XX presented by Ferris Mowers.

Owens, 42, failed to jump out to the lead at the initial green flag from his pole position starting spot, but that was the only blemish on his run. He glided by the 17-year-old Pierce, who started second, just after the halfway mark and controlled the remainder of the distance to pocket a $2,500 check.

Pierce, who won the UMP DIRTcar Spring Nationals A-Main at Eldora on April 12, settled for a runner-up finish, 1.441 seconds behind Owens.

Eric Wells of Hazard, Ky., earned a career-best Eldora finish of third after surging past Jacob Hawkins of Fairmont, W.Va., on the restart following the race’s only caution flag, on lap 22. John Blankenship of Williamson, W.Va., also passed Hawkins on the final restart to place fourth, leaving Hawkins fifth at the checkered flag.

Owens watched Pierce build a 10 car-length edge early in the race, but he didn’t overdrive his mount in an effort to erase the gap.

“He was right up there riding the high-side cushion,” Owens said of Pierce. “He was running pretty hard, and really, I didn’t push it, because it’s not a big race and I didn’t want to take any big chances.

“When we got to lapped traffic he just came to me, and I guess we were able to still move because we hadn’t overheated our stuff.”

The triumph gave Owens a good feeling for the remainder of the weekend.

“I’m a little more confident than I’ve been in the past,” Owens said. “I’ve had really good success in our Bloomquist stuff here, but I feel like I can run that high side right against the wall a little more comfortable.

“So for the most part, we’ve gotten off to a good start with this new car and now we just gotta keep digging.”

Pierce fell short of kicking off the Dream weekend with his 12th overall win of his spectacular 2014 season, but he learned some things he hopes to use to his benefit as the weekend continues.

“I kind of wish some of those lapped cars would’ve gotten out of the way a little bit better when they got the move-over flag,” said Pierce, who drove a car that sported a retro graphics scheme resembling the Dependable Carburetors No. 32 his father Bob ran in the early ‘90s. “But you gotta race ‘em — and it’s good practice for the 100-lap race. I kind of realized how you gotta work those (lapped) guys and maybe use the right side (to pass them) if I have to.

“I got stuck behind those lapped cars and wasn’t able to run my own race, and (Owens) had a good car to run right through that middle in (turns) one and two and three and four. But Jimmy has a ton of laps at this place, so just to run second behind him is really good.”