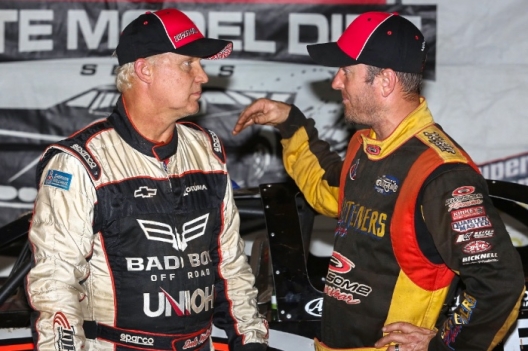 Charging around the outside lane of the 3/8-mile oval to grab the lead from race-long pacesetter Tim McCreadie of Watertown, N.Y., on lap 43? When McDowell unloaded his Team Dillon Racing Sweet-Bloomquist car, he wouldn’t have thought he’d use the top side of the track to secure the race’s $12,000 first-place prize.

“We got here I talked to (fellow driver) Ray Cook (of Brasstown, N.C.) and I said, ‘What’s it gonna be like?’ ” McDowell said following his second Lucas Oil Series triumph of 2016 and the eighth of his career. “And he said, ‘Well, I think the top is gonna be really, really fast,’ and I’m like, ‘No way!’ The only time we’ve seen that (quick outside groove) actually here is when it’s rained.”

But Cook, who would go on to finish ninth in the feature, was right. There was a very prominent outside line available to drivers, and the 50-year-old McDowell seized on it to complete his advance forward from the ninth starting spot.

“(Promoter) Mickey (Swims) and the guys worked hard,” McDowell said. “It was really racy, you could pass. I know how hard that is — it is way harder than it looks from the grandstand and the pit area to prep (the surface), but Mickey’s got years at it so he does a good job.”

McDowell’s outside moves denied McCreadie, 42, the Lucas Oil Series win he’s been searching for all season. The first-year tour regular had to settle for a runner-up finish, 2.923 seconds behind McDowell, after starting from the pole position in his Sweeteners Plus Longhorn Race Car.

Scott Bloomquist of Mooresburg, Tenn., who built the winner’s chassis, finished third, hot on McCreadie’s rear bumper at the checkered flag after starting seventh. The 52-year-old Hall of Famer had something to celebrate, however; with his Lucas Oil Series points lead ballooning to a massive 745 points over Jonathan Davenport of Blairsville, Ga., who finished 24th after mechanical trouble forced him out of the race while running second on lap nine, he has clinched his third career tour championship and first since 2010 with three races remaining on the schedule.

Completing the top five was Brandon Overton of Evans, Ga., who hustled forward from the 13th starting spot, and third-starter Darrell Lanigan of Union, Ky.

McDowell’s winning move was set up by the race’s second and final caution flag, on lap 39 when Clint Smith of Senoia, Ga., slowed with a flat right-rear tire. Deciding to test the top of the track, he swung around the outside of Bloomquist to take second place on the restart and then used the same lane to surge by McCreadie for the lead rounding turns one and two on lap 43.

“I felt it (the outside of the track) under caution a little bit and I was hoping there wasn’t too many crumbs there, but everything was good,” McDowell said. “What I was afraid of was if I hauled ass off down in there and busted my tail … that Shane (his brother and crew chief) was standing down there in that corner and I’d be fired tomorrow. But I just hauled it off down in there and it stuck.”

McDowell felt fortunate to be the chasing driver in the race, not the chased.

“I was watching (McCreadie) and it’s awfully hard to to lead because you don’t know where in the hell to be,” McDowell said. “So he was searching and searching, and I was able to go where he wasn’t. It just ended up working out for us.

McCreadie was disappointed to fall short of victory once again in Lucas Oil action, but he conceded that he simply didn’t have the speed to stop McDowell.

“That’s the way it goes,” said McCreadie, who vaulted from fifth to third in the Lucas Oil Series points standings. “It’s easy to take when you get beat by a better car and a better driver.

“I didn’t t think anybody could really get out there (on the outside). I heard (McDowell) once and I moved up … I guess I just didn’t move up enough, but I don’t think it was gonna matter.”

Bloomquist, meanwhile, did beat McDowell to second place behind McCreadie and drew close to the leader midway through the feature, but the lap-39 caution flag effectively snuffed out his hopes for a 15th series triumph in 2016.

“The setup I had on, it wasn’t real friendly for firing up real good (on restarts),” Bloomquist said. “But the longer I’d run I felt like I was getting better. I know what I did wrong … we can fix it.”

Seeing McDowell steer a Sweet-Bloomquist car to the checkered flag, however, brought Bloomquist plenty of satisfaction.

“I’m glad to see he won if we couldn’t,” Bloomquist said. “We’ve just been trying different things and he’s a good guy to work with. He drives real straight, smooth … we’re hoping to have a pretty good relationship here in the future.”

Notes: McDowell became emotional for a moment in victory lane when he dedicated the win to his late mother, who passed away five years ago on Sept. 30. “This was one of her favorite places,” he said. … McDowell won the Dixie Shootout for the third time in his career. He previous triumphs came in 1999 and 2001. … Davenport, who brought out the feature’s first caution flag, drove the Chip Stone-owned Longhorn No. 116 in Lucas Oil competition for the first time. He plans to run the car again in Sunday night’s Lucas Oil event at Rome (Ga.) Speedway. … Sixteen of the A-Main’s 24 starters finished on the lead lap. … Chris Madden of Gray Court, S.C., entered the event on a hot streak but was never a serious factor in the feature. He started eighth and finished seventh.