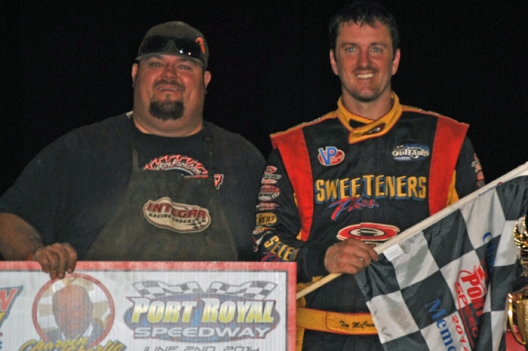 Kevin Kovac/DirtonDirt.com
Tim McCreadie enjoys victory lane with his chief mechanic Johnny Cocco.
What won the race: Tim McCreadie of Watertown, N.Y., overtook Jeff Rine of Danville, Pa., for the lead on lap 20 and marched on to win the 40-lap feature and clinch his second career Appalachian Mountain Speedweek championship.
Quotable: "The camera guys kept taking pictures and taking pictures, and I thought for sure Jamie (Lathroum) or Rick (Eckert) was underneath me, so I just tried to go as hard as I good," McCreadie said after winning by more than five seconds. "So I just tried to go as hard as I could and we were fortunate enough that the cushion held me in place."
On the move: Jason Covert of York Haven, Pa., earned the tour's $200 hard-charger bonus after advancing from the 23rd starting spot to ninth at the finish.
Winner's sponsors: McCreadie's Ann and Carl Myers-owned Rocket Chassis is powered by a Pro Power Racing Engine with sponsorship from Bulldog Rear Ends, Coffey-McCreadie Enterprises, FK Rod Ends, Sweetners Plus and VP Racing Fuels.
Points chase: McCreadie won the title by 93 points over Jason Covert (798-703), earning the 'Huey' trophy honoring late MBH Race Cars co-owner Huey Wilcoxon and a $3,500 check.
Car count: 41
Fast qualifier: Justin Kann
Time: 19.545 seconds
Polesitter: Jeff Rine
Heat race winners: Tim McCreadie, Rick Eckert, Jeff Rine, Jamie Lathroum
Consolation race winners: Mitch Hack, Mike Altobelli Jr.
Provisional starters: Matt Parks
By Kevin Kovac
DirtonDirt.com senior writer

But it was a false alarm for the 40-year-old star from Watertown, N.Y., who maintained thorough domination of the 40-lap Charlie Grinestaff Memorial once he passed race-long pacesetter Jeff Rine of Danville, Pa., for the lead on lap 20.

“I saw the flashbulbs going off on the photographers’ cameras at the end there so I was getting a little nervous,” McCreadie said after the $4,000 triumph that clinched his second career Appalachian Mountain Speedweek points championship. “I’ve been racing a long time and I know that unless it’s the white-flag lap, usually the camera guys let you know where the good guys are. If you’re leading for 30 laps and nobody’s around and they don’t take one picture, and then all of sudden there’s flashbulbs all the way around the track, then you know somebody’s coming.

“Well, they were taking a lot of pictures the last bit there, so I thought I might be in trouble. So I just ran as hard as I could.”

McCreadie throttled his Sweeteners Plus Rocket car to a commanding victory margin of 5.507 seconds — a full straightaway on the sprawling half-mile fairgrounds oval — over Rick Eckert of York, Pa., who steered his Paul Crowl-owned Rocket past Jamie Lathroum of Mechanicsville, Md., and Tim Fuller of Watertown, N.Y., on lap 37 to secure the runner-up spot.

Lathroum settled for a third-place finish after holding the second spot for the previous 16 circuits, the eighth-starting Fuller finished fourth and Dan Stone of Thompson, Pa., advanced from the 11th starting spot to complete the top five.

McCreadie completed a wire-to-wire run atop the points standings of the four-race AMS to become the first two-time titlist of the six-year-old mini-series. He grabbed the points lead with a victory in the opener on May 30 at Roaring Knob Motorsports Complex in Markleysburg, Pa., and maintained it with subsequent outings of fourth on May 31 at Hagerstown (Md.) Speedway, seventh on June 1 at Bedford (Pa.) Speedway and a second victory — the fourth of his career in AMS competition — in Port Royal’s tour closer.

The championship brought McCreadie a $3,500 bonus as well as the first ‘Huey’ trophy, which the series now calls its champion’s hardware in memory of late MBH Race Cars co-owner Huey Wilcoxon. He was honored to capture the title during a break from his national touring with the World of Outlaws Late Model Series.

“Anytime you can get a championship it means a lot,” said McCreadie, whose previous AMS crown came in 2012. “These guys (from the Mid-Atlantic region) are no joke. By no means would these guys go to some of the tracks we go to (with the WoO) and not make shows. They’re good, but they just don’t travel that much.

“These guys push you hard,” he continued. “We didn’t run that good last night (at Bedford) and Hagerstown we were just O.K., and they made us pay. We came here and put some new stuff on shock-wise to try to get better and we did.”

McCreadie got off to a slow start in Port Royal’s feature, though. He started from the outside pole but watched Rine build a healthy early lead off the pole as he battled to hold the second spot.

“The outside was a little slimy from (the track crew) watering it when they first sent us out there,” said McCreadie, who briefly lost second place to Tim Wilson of McClure, Pa., before a lap-eight caution flag. “I was a little nervous. I pulled out on the track and went up there and slid, and I was like, ‘Whoa!’ so I didn’t really go way out there early. I was kind of going in and driving across to the cushion.”

McCreadie’s eyes were opened to the possibilities of the track’s top side when Gregg Satterlee of Indiana, Pa., used the groove to sail by him for third place off turn four as lap eight was completed. Satterlee, who started sixth, saw his charge end seconds later when his engine expired in a cloud of smoke, causing him to bring out the race’s first caution flag.

McCreadie felt fortunate that Satterlee was forced out of action. He told Satterlee exactly that when the 29-year-old driver stopped by to congratulate McCreadie after the race.

“I don’t think I would’ve ever got you once I moved out of your way,” McCreadie said to Satterlee. “You ripped my numbers off when you went by. I felt so bad up there (in the outside lane) early, and I was like, ‘It must be getting better down there (on the bottom).’ I moved down (in turns three and four) and then you just went right by me. I was like, ‘Uh-oh.’ I never went down there after that.”

Finding a way around Rine wasn’t easy, but McCreadie finally made the move to grab the lead with a slide to the inside of turn one at the race’s halfway point.

“He was just arcing late, covering the outside and then going to the middle, so it was just hard to get a run on him,” McCreadie said of Rine. “Here you kind of have to get a little bit of a run on the outside, and he was arced out so late that I couldn’t drive off in there. But he must have had softer tires because it seemed like he started dying and we just kept getting better and better.

“Once I got a good run on the frontstretch and he arced out, I just slid him into one. I figured we had him cleared by a bunch.”

McCreadie’s march to the checkered flag was slowed by caution flags on lap 29 (Jim Yoder of Selinsgrove, Pa., slowed on the backstretch) and lap 30 (Wilson stopped after his left-front wheel locked up), but he handled the restarts with little trouble.

“That last restart I actually moved up even further (in the top lane) getting in,” McCreadie said. “I should’ve been there most of the time because it was really good.”

When the 48-year-old Eckert finally reached second place on lap 37, McCreadie was in another area code.

“I had a heck of a race with (Lathroum and Fuller),” said Eckert, who won last year’s AMS feature at Port Royal. “It was an awesome racetrack — there was one on the top and one on the bottom, and I was following Jamie on the top. Finally I said, ‘Well, there’s a middle,’ and got by them both.

“But by the time I (secured second), I couldn’t even see McCreadie. He was gone, so I don’t think we would’ve had anything for him if we got a caution.”

Lathroum, 35, was satisfied with his third-place finish after starting fifth in his MasterSbilt by Huey car. It was his best run of the Speedweek.

“We won the heat but didn’t feel that good, so we changed everything but the driver for the feature,” said Lathroum, who finished eighth in the AMS points standings. “It felt pretty good, but we just had a different tire than everybody else, a little softer (compound), and it gave out at the end. Last year here we did the opposite — we went a little harder than everybody else — and the cautions came out and hurt us.

“But we’ll take third. We finished behind two guys who do it for a living, so that’s pretty good for us, especially the way we’ve been struggling.”

Notes: McCreadie also scored two victories en route to the 2012 AMS championship. His four career AMS triumphs ties him with Eckert and Josh Richards of Shinnston, W.Va., for winningest-driver status in the tour’s short history. … The top five finishers in the AMS standings received points-fund checks during a post-race ceremony. McCreadie received $3,500; Jason Covert of York, Pa., earned $1,750 for finishing second; Fuller picked up $1,000 for third; Austin Hubbard of Seaford, Del., got $750 for fourth; and Vic Coffey of Caledonia, N.Y., earned $500 for fifth. … Rine slipped backward after losing the top spot to McCreadie and ultimately pulled off due to a flat right-rear tire. ... Wilson also faded after sitting in second place for a lap-eight restart. He was hampered by a bent nosepiece before having his left-front suspension trouble on lap 30.