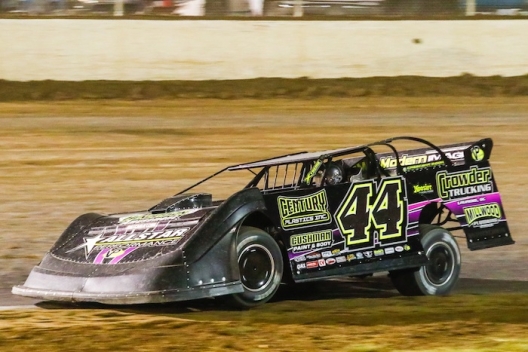 After struggling during Friday evening’s qualifying action on a heavier, faster racetrack, Madden had his Longhorn tuned perfectly for the slick on Saturday to register his first-ever victory in the Magnolia State Cotton Pickin’ 100 presented by Country Pleasin’ Sausage.

Madden, 41, of Gray Court, S.C., steadily moved forward from the 12th starting spot in his Longhorn Race Car to grab the lead from Kyle Bronson of Brandon, Fla., on lap 52 and never looked back. He dominated the remainder of the distance, beating Dale McDowell of Chickamauga, Ga., to the finish line by 1.434 seconds for a $20,000 payday.

Making the second trip of his career to 3/8-mile oval, Madden was thrilled with the performance of his machine when it counted.

“Man, it was awesome,” said Madden, whose only previous appearance at Magnolia resulted in finishes of fifth and 16th in an April 2014 doubleheader sanctioned by the defunct National Dirt Racing League. “Thursday night we come and practiced and the racetrack was slick most of the night. We just kept working on stuff to run that middle to the bottom and got our car dialed into that.

“Last night (the track) was up around the top and we really weren’t prepared for that, but tonight the racetrack come back to us and we was able to get up there toward the front where we needed to be and get in front of Dale (McDowell) and those guys and get going.”

Madden slipped by the 10th-starting McDowell early in the feature and cracked the top five by lap 25. The veteran racer then calmly disposed off his remaining rivals, finally completing his advance when he slid underneath Bronson for the lead off turn two just after the halfway mark.

“I just waited and picked my groove there on the restarts,” said Madden, who scored his 10th overall win of a 2016 season that saw him miss several weeks of action during the summer while recovering from a concussion he suffered in an accident at Smoky Mountain Speedway in Maryville, Tenn. “Those guys were kind of blasting the corner pretty hard and I just never spun my wheels and just rode right there in the middle. They’d blast the corner and I’d just ease up beside ‘em and take their line going in the next corner and just keep moving forward like that.”

Madden praised the surface-prep work of promoter Johnny Stokes, who whipped the speedway into its usual slick condition for Saturday night’s program.

“I’d like to thank Johnny for working on the racetrack — you gave us a great racetrack tonight, we really appreciate it,” Madden said. “Anytime we race on something slick, it’s fun.

“It’s been a while ago since we come down and run,” he added. “We had a great run and enjoyed it. The (Cotton Pickin’ 100) race just didn’t fall right on our schedule (in recent years), but Johnny got it moved around and it fell right for us to be able to come and run with him.”

McDowell, 49, slipped past Breazeale for second place following the race’s final restart, on lap 86, but he wasn’t able to seriously challenge Madden.

“Well, we started in front of him, so he was pretty good,” McDowell said. “He passed us there in traffic (early in the feature).

“My (Team Dillon Racing Sweet-Bloomquist) car wasn’t very good there to begin with and we finally got a little happy spot to race in and pass a little bit. Hat’s off to Johnny and all the guys that worked on the racetrack because actually you could do some passing on the very top and bottom … it was racy, and any time you can run quarter- to half-throttle down the straightaways it’s pretty good.”

The happiest driver in victory lane following the race was actually Breazeale, the 40-year-old Mississippian who was almost at a loss for words after claiming a third-place finish in Magnolia’s major event.

“I’m gonna be emotional here,” said Breazeale, who climbed as high as second in his Barry Wright Race Car. “I’m so happy to be third, I can’t even … I ain’t even got words to describe it.

“I might as well have won. It don’t matter what the check says … I won. It’s great for our team, a first-year team.”

Five caution flags slowed the event. Brandon Overton of Evans, Ga., slowed on lap seven and 22 with nose damage; Mike Marlar of Winfield, Tenn., who won the Lucas Oil Late Model Knoxville Nationals one week ago, slowed on lap 28 and spun between turns three and four on lap 35; and debris caused the final slowdown on lap 86.

Notes: Sixteen of the race's 24 starters finished on the lead lap. ... Jack Sullivan of Greenbrier, Ark., challenged Clanton for the lead early in the feature but slipped back to finish ninth. … Former MARS champion Jesse Stovall of Billings, Mo., entered the event in a Billy Franklin-owned No. 18, a car Franklin purchased from Alabama’s Ronny Lee Hollingsworth. He was an early retiree and finished 20th. … Tim Busha of Boaz, Ala., fielded a Thomas Pope-owned No. 99 (driven last year by Devin Moran) but failed to qualify. ... NeSmith Crate champion Michael Arnold of Hattiesburg, Miss., entered in a Henry Cooper-owned Super Late Model but failed to make the feature lineup.