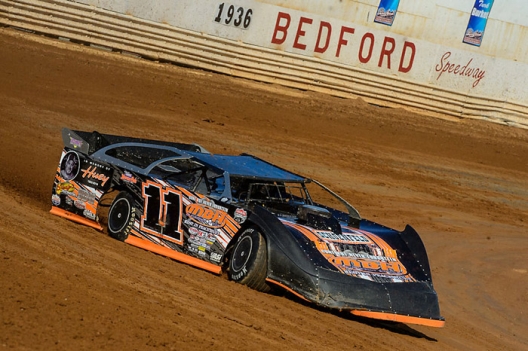 But the tears that trickled from the eyes of the 22-year-old driver from Seaford, Del., as he emerged victoriously from his car weren’t the byproduct of sheer joy — though they certainly could have been, considering the $4,000 triumph was his first outside his home state in nearly three years.

More specifically, Hubbard had to wipe back moisture because his flag-to-flag score in Round 3 of the four-race mini-series made him think of the late Huey Wilcoxon, the popular co-owner of MBH Race Cars in Martinsburg, W.Va., who died at the age of 50 on April 18. Wilcoxon’s stepsons, Billy and Steven Vacek, greeted Hubbard in victory lane, adding more poignancy to the moment.

“This one’s for Huey,” said Hubbard, whose four-race-old MasterSbilt by Huey machine sported a specially-designed wrap memorializing Wilcoxon. “It means a lot for me to win in a car that you could say was the last car he worked on in his shop.”

A free-spirited young driver who has struggled to continue ascending in the Dirt Late Model world after capturing the World of Outlaws Late Model Series Rookie of the Year award in 2010, Hubbard finally put together an outing equal to his potential. He took advantage of an outside pole starting spot to lead the race’s entire distance without facing a single serious challenge.

Vic Coffey of Caledonia, N.Y. — another former WoO Rookie of the Year — slipped into second place on a lap-29 restart and chased Hubbard for the remainder of the distance, but the 42-year-old driver never drew close enough to make a bid for his second career Speedweek victory. He settled for runner-up money, giving him two top-five finishes in three series events.

Hubbard’s Speedweek triumphs in 2011 — a $5,000 success on June 7 at Williams Grove Speedway in Mechanicsburg, Pa., and a $7,000 victory on June 8 at Lincoln Speedway in Abbottstown, Pa. — were also his last special-show wins outside Delaware.

“I don’t win a lot unfortunately,” said Hubbard, whose four victories in 2013 were split between Delaware International Speedway in Delmar and Georgetown Speedway. “We run well and we’re always pretty competitive, but it just seems like it just don’t seem to happen for us. Whether something happens or I mess up — wins are hard to come by, and they only get harder. The people we race with know what they’re doing so you gotta be up on top of it.”

Hubbard was on his game at Bedford with his father Mike’s Cornett-powered mount. Aware that the half-mile oval’s surface was hard and abrasive, he focused on conserving his car’s tires.

“Once (the track) started rubbering I said, ‘Well, I need to just try and make sure I don’t run out of the rubber,’” Hubbard said. “Don’t slide the tire. Just try to make it live.”

Hubbard avoided punishing his tire, but his right-rear shoe barely made it nonetheless. It was virtually bald when he finished the race.

“I was pretty sure that tire was gonna be close, if not blown out, by the end,” Hubbard said. “It probably only had a couple more laps in it.”

Ultimately the key to Hubbard’s victory was his ability to handle the race’s four restarts following caution flags on laps 15, 29, 30 and 32.

“The biggest thing I tired to do was start in a different spot every time,” Hubbard said. “Except for the last restart, I never actually started at the first cone — and traditionally everybody just goes at that first cone. I just tried to stay unpredictable, make sure I had a good run and I wasn’t getting in the gas while I was turning. I wanted to be pointed and just roll into it and go.

“There was a little rubber off of (turn) four. In the beginning I was hitting the mud spot, but once it rubbered, that rubber is better than mud any day. There was only one little patch of it down there, and I just made sure that I started right where that patch started. They (his pursuers) were gonna have to spin (wheels) for at least a half-second or whatever till they got to that rubber, and that was just enough for me to get a car length or two — and that’s what you need on a restart, a little padding to make sure you don’t get passed if you over-run or do dumb stuff into that first turn.”

Coffey, who started eighth in his Sweeteners Plus Rocket, actually benefitted from Hubbard’s restart strategy, vaulting from fifth to second when the green flag flew on lap 29.

“Austin was really creeping things down on the restart,” Coffey said. “He was doing the right thing — he was waiting until he was in the real good patch of rubber off of (turn) four. He’d wait until he was in that real good patch of bit to hit the gas. When he’d hit the gas to take off, we’d all still be in the slick stuff for a second while he got away.

“On that (lap 29) restart, it looked like the 92 (Rine) spun his tires, which allowed the 24 (polesitter Dylan Yoder of Selinsgrove, Pa.) and myself on the outside to get a good run. I was able to clear the 72 (Covert) into one and then the 24 just got up in the dust a little bit too high, and when he slid up (and caught the outside wall with his car’s rearend) I shot through the middle.

“Jeff Rine and I went down the backstretch and I had just a little bit on him going into three. I ran down in there with intentions of staying in the middle, but when I seen him lift and the door opened I kind of cut down to try and not miss the lane. That’s how I got to second.”

Coffey had to be satisfied with second place because he couldn’t mount a challenge on Hubbard — not even after a final caution flag on lap 32 for Yoder, who spun onto the inside berm in turn two.

“I had one shot at him down (in turns one and two) when he pushed on a restart,” said Coffey, whose May 23 appearance at Bedford’s Three State Flyers event was his first Dirt Late Model start since February’s Georgia/Florida Speedweeks. “But really, I don’t think I was gonna get by him. We were probably pretty much the same.”

Notes: Early retirees in the feature were sixth-starter D.J. Troutman of Hyndman Park, Pa., who pulled off on lap 10, and Matt Parks of Three Springs, Pa., who stopped in turn four with mechanical trouble on lap 15 while running third. … Defending AMS champion Gregg Satterlee of Indiana, Pa., who won the May 23 Three State Flyers event at Bedford, slammed the turn-one wall on the first lap of the second heat. His car nearly rolled over before he limped into the pits with heavy right-side damage; he was able to patch the car back together in time to run the first consolation and rallied to finish second and then earned hard-charger status in the feature by advancing from 23rd to place 10th. … After finishing third in the first heat, AMS points leader Tim McCreadie of Watertown, N.Y., pulled alongside runner-up Troutman on the backstretch to express displeasure with some contact late in the race. ... Matt Cochran of Danville, Pa., pounded the turn-one wall on lap five of the first heat and was done for the night. ... Kyle Bronson of Brandon, Fla., saw his night end early due to mechanical trouble during heat action.