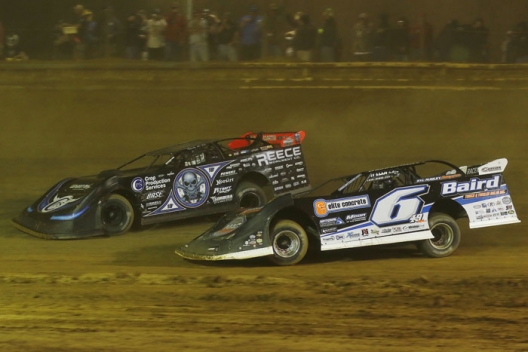 MIDDLEBOURNE, W.Va. (Sept. 4) — It’s been over a decade since a driver last scored back-to-back Hillbilly 100 victories. But Scott Bloomquist of Mooresburg, Tenn., did just that on Sunday night at Tyler County Speedway.

“We looked at our gages and the water temperature pretty much read zero and the oil temperature was past 300 and the oil pressure was down to 15 pounds,” Bloomquist said, finding water pump issues after the race. "Every time I saw a flat tire or something happen there, I just thought ‘Oh no. This is going to blow or it’s going to lock up on the last lap.’ We want to thank Andy Durham for building such a good engine to run without water for as long as it did. It’s just one of those things. Sometimes it’s meant to be.”

Winning his heat race to start outside the front row of the 100-lapper, Bloomquist shot to an early lead. But as the race leaders worked their way through lapped traffic, Davenport began reeling in the Hall of Famer, briefly taking the lead on lap 13 before a yellow flag waved to shuffle the field back to the last completed lap.

With Bloomquist back to the point, he fought back further challenges from Davenport, as fourth-starting Brandon Sheppard of New Berlin, Ill., rallied around the high side to join the front runners. While the top-two remained steady throughout the 100-lap distance, late-race cautions would see the demise of Lucas Oil Series regulars Tim McCreadie of Watertown, N.Y., and Earl Pearson Jr. of Jacksonville, Fla., who were both racing among the top-five before retiring early.

It was Pearson who slowed to draw a the race’s final caution on lap 97, setting up a three-lap shootout to the finish. Bloomquist held off Davenport to score his third career Hillbilly 100 victory, his first at the Middlebourne, W.Va., oval.

“Every time I saw there would be another caution, we slowed the engine down,” Bloomquist said. "That’s why I kept it revved up there at the end. You can keep something going a lot easier than you can get it going again. I was just trying to be easy taking off. I wasn’t sure that the gages didn’t go bad or something went wrong with them all because all of them were reading wrong. But the direction they were all reading, it was spooky. I couldn’t really hear or feel it with the way it was running. As soon as we went to the scales there and come back in, I could smell something. Hopefully it’s salvageable"

With Davenport finishing runner-up, Sheppard rounded out the podium in third. Rallying from the 15th starting spot, Mike Benedum of Salem, W.Va., ran fourth, with Tim Dohm of Cross Lanes, W.Va., rounding out the top five.

“It was hard to pass from the beginning there,” Davenport said. “There at the end I was just trying to ride. The only way I was going to get by  (Bloomquist) was if he did blow out a tire or something. But I figured he wouldn’t do that, so we just held on for second. Something happened to him about midway there, he lost a lot of fluid and I didn’t know what that was. And then something on the last lap, I saw a bunch of stuff come out from under his car. I’m sure he was having a handful there.

“I thought we had the lead there. I’m going to have to watch the video on that. They said only two cars past the line there. But anyway, it was still a good weekend for us. What a turnaround, two firsts and a second. From qualifying we started eighth in our heat race and got to second there, so that was really good. That was key to running second tonight. My team, they worked their tails off and it was a good weekend.”

After struggling in the tour’s Saturday night Portsmouth (Ohio) Raceway Park, Sheppard was still pleased to come away with a third-place finish.

“Friday and Saturday we had some terrible luck,” Sheppard said. “To come out of here third, we were really happy. I was behind McCreadie and (Pearson) there and I could kind of see on the cautions how bad their tire was, so I was kind of being pretty conservative there. That last caution, I think Benedum was coming on that top and we got together a little bit. Hopefully he ain’t mad at me for that. The track was a little bit rubbered up, but early in the race it was pretty racy. Hopefully we get to come back again next year."