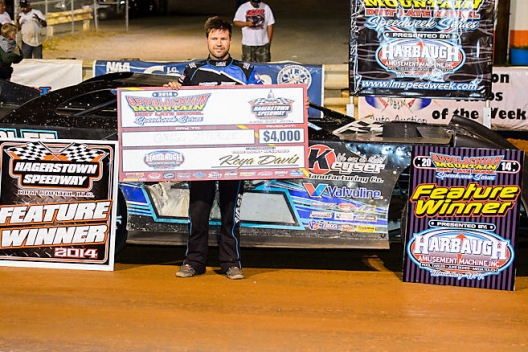 HAGERSTOWN, Md. (May 31) — Gregg Satterlee of Indiana, Pa., showed the way — all the way — in the second round of the Appalachian Mountain Speedweek presented by Harbaugh Amusement.

Drawing the pole from among the top two finishers in four heats, Satterlee made the most of it to lead 40 laps for a $4,000 victory. He won his sixth race overall of the season and third of his career on the miniseries.

“This is a tough deal,” Satterlee said. “There are 40 some cars here and this is a good group of guys to race against. Any time you come out on top it feels really good. These are some of the best guys you can race with in the entire county and they all work hard and it’s good to get a win.”

Satterlee took the checkers ahead of Jason Covert of York Haven, Pa., while Steve Axtell Jr. of Glen Burnie, Md., had a career-best miniseries finish of third. Series points leader Tim McCreadie, who started outside the sixth row, and fellow Watertown, N.Y., driver Tim Fuller rounded out the top five.

Satterlee and Mason Zeigler were on the front row for the start, but Zeigler left just a little too early and was sent to the rear for the jump, sliding Axtell to outside the front row.

Satterlee pulled to the lead over Tim Wilson and Covert and by the fifth lap had opened it to more than two seconds while he approached the rear of the field.

Satterlee was occupied for a few laps before charging between two slower cars on the 14th lap as Covert got past Wilson and continued to chase him until the caution came out on the 17th circuit.

With open track, Satterlee went to work again to stretch his lead on Covert while Axtell got past Wilson two laps later as he and Covert began to close on Satterlee once he got to the rear of the field again on the 29th lap.

Satterlee again got a reprieve on the 31st lap as Mike Lupfer, having a good run in fifth, rolled to a stop in turn four with fire under the hood.

Under way again, Satterlee showed the dominant car and stretched out his lead to 2.981 seconds over Covert in the final nine laps, reversing the order of last year’s miniseries event at Hagerstown.

“I was getting signals from my guy on the back straightaway and he was telling me I was getting away, but when I got into lapped cars, I could tell I was slowing down a lot,” Satterlee said. “They were running two wide there and it was really difficult to maneuver some of them. The cautions kind of came at the right time. I was working my way past a couple of them, but I certainly was glad to see the yellows come out. It gave me a clean race track.”

“I think Gregg showed he probably had the best car,” Covert said. “He did the best job. We just could not on the open track, on the restarts; I couldn’t keep up and then I could get driving and traffic held him up. I don’t know if I could have got him.”

“The thing was hooked up, I could go anywhere,” Axtell said. “We’re slowly progressing as we go. We’re going to get somewhere eventually. We were catching up but it was a really good run and I’m satisfied.”